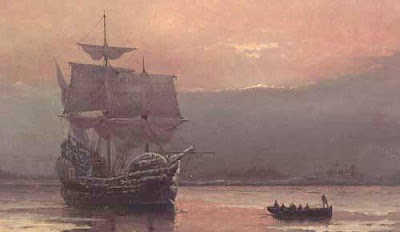 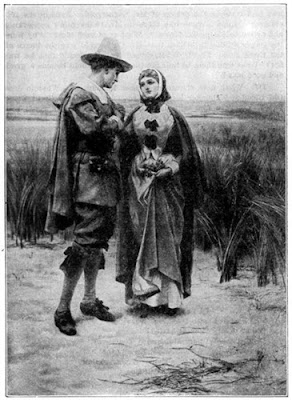 John Alden, a 9th generation ancestor of Arthur Fuller, is said to be the first passenger of The Mayflower to set foot on Plymouth Rock in 1620. There are conflicting theories on his own ancestry.

He was a ship-carpenter by trade and a cooper for The Mayflower, which was usually docked at Southampton. He was also one of the founders of the Plymouth Colony and the seventh signer of the Mayflower Compact. Distinguished for practical wisdom, integrity and decision, he acquired and retained a commanding influence over his associates. Employed in public business he became the Governor's Assistant, the Duxbury Deputy to the General Court of Plymouth, a member under arms of Capt. Miles Standish's Duxbury Company, a member of Council of War, Treasurer of Plymouth Colony, and Commissioner to Yarmouth.

John Alden had settled with the Pilgrims in the Plymouth Colony, though not a pilgrim himself. He was hired to repair The Mayflower while she lay at Southampton, England. Without any religious motives, John decided to journey when she set sail, perhaps with the hope of being prosperous in the New World, or because he wished to follow Priscilla Mullins. John wasn't the only man who had fallen for Priscilla. John's friend, military Captain Miles Standish had come to love the Maiden throughout the long voyage of 1620. A love triangle ensued with the result of John ultimately winning Priscilla's heart. Legend has it that Priscilla was growing impatient with John's lack of assertion in his courtship of her, and was quoted to have said "Why Don't You Speak For Yourself, John". A pewter figurine was created to memorialize this moment in their courtship: 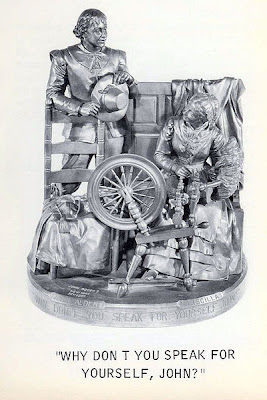 They married on May 12, 1622. Priscilla’s parents, and her little brother, also Mayflower passengers, all had died during the notorious first Plymouth winter. Their son, Joseph Alden, is our direct ancestor.  Their son John Alden Jr. was a sea captain who was accused of witchcraft in Salem.

Dr. Samuel Fuller of the Mayflower is a link that I've heard the family speak of since I was a child. I have yet to find the actual link, however. The furthest I was able to trace the Fuller line with actual documentation is to Samuel Bean Fuller ("SBF"), who was born in 1812.

Harold Murch Fuller, Nana's older brother, was also an avid genealogist, like his mother. He was on a mission to find this link to Dr. Fuller, with actual proof. Shortly before his death, he wrote a typewritten document to his children, asking them to carry the torch, as it were. His children Joyce, Mark and Joel are currently the Murch/Fuller genealogists in the family. After meeting with them, I've learned that they've done a paternal DNA test.  This test yielded the result that the Fuller line goes back to Edward Fuller (Dr. Samuel's brother), who also sailed on the Mayflower, but died that first winter in Plymouth.

Edward's son Matthew (who was born in England) arrived in Plymouth in 1640, almost two decades after his father died.  Matthew named his son Samuel, after his uncle.  This Samuel was killed at age 45 in King Philip's War.  His son Timothy married a woman named Sarah Gates from Haddam, Connecticut, and moved there with her, having seven children.  Timothy's youngest, Samuel Fuller, grew up in East Haddam, and married Marcy Price, having ten children.  Samuel's eldest son, Samuel Jr., left East Haddam for Campton, New Hampshire.

That is where the Mayflower Families Through Five Generations volumes stop.  However, many trees online show this last Samuel to have had a son named John Fuller born in Campton.  Joyce, Joel, and I believe that this John is SBF's father and husband to Mary Bean, of the Scottish Beans.  While we don't have any document to link the Fuller line from our John up to the last documented Samuel, the DNA testing seems to confirm our assumptions.
Posted by Scott Leonard at 4:30 PM