The Tale of Lizzie Tooker


My Grampy Clark's mother, by all accounts so far, was reputed to be a 'mean old bitch.'

Lizzie Tooker of Lyme, Connecticut (daughter to John & Nancy Tooker) worked as a dressmaker from the tender age of 13. She married Niles Martin Clark, a young blacksmith from East Haddam, Connecticut (just up the river from her) in 1887.  Like most people of her class in that era, she never attended high school.  She and Niles had nine children...five boys and four girls. All was well, I guess, until 1910/1911, when she placed three of her boys in orphanages:

-Her son Leonard S. Clark (named after his grandpappy), was nicknamed "Red".  He lived at the Middlesex County Home for Boys.

-Another son, Clifford Clark, lived at a different Home for Boys, in Meriden, CT. He ended up serving in WWII, traveled the world, and settled in Galveston, Texas.

-The eldest son, Niles Carrol Clark (whom my uncle Niles was named after), lived at still a different Home for Boys in Hartford, CT, settled in Hartford, but then was drafted to serve in WWI, only to die of pneumonia in France in November 1918, a few months after the War was over.  It took THREE YEARS for Lizzie to get his body shipped back to the USA.

When her husband Niles M. Clark died in 1911 (at only 45 years of age), Lizzie was in the process of getting all her boys off to the work farms.  The youngest two boys (Herbert Francis and James Raymond) to live at "Opportunity Farm" in Maine, where we know they weren't treated so well.  Herbert Francis was named after Lizzie's nephew Herbert, born to her big sister Francina (who was named after their aunt, Frances Tooker-Hall of Lyme, CT).

After three years as Niles' widow, Lizzie in 1914 married someone named Folger for just a few years (who I believe was Bert Folger (or Fogler) from Round Pond or Bristol, Maine).  This man was old enough to be her son, according to family legend, and it was a big scandal at the time, that she would ship off her five boys to orphanages, and take the family money and move in with this young man up in Maine.  Her children looked down on her as a result.  Bert Folger, mentioned above, was indeed 13 years younger than Lizzie.


The 1919 Portland directory has Lizzie listed as a housekeeper under the name "Mrs. Lizzie M. Folger", at 7 Park Avenue, South Portland.  In February 1919, though, she married a Scarborough teamster named Daniel L. Bragdon (her residence at the time of marriage was in nearby Bristol, Maine).  Dan was her age at least.  At a certain point, however, she did allow James, the youngest boy, to move in with her and Daniel in Scarborough, Maine, until James enlisted in the Navy for WWII, and ultimately moved off to NY State as an adult.

In 1920, Lizzie Bragdon bought 115-123 Park Avenue, South Portland, the same property once owned by Daniel's previous wife Fannie.  She let her son Leonard live with her a bit during this time in South Portland.  In 1922, she bought the nearby lots on 124-127 Park Avenue.  She turned those four properties around in 1924.  Also in 1924 she swapped the 115-123 group with John Kimball in exchange for a 60 acre lot on Two Rod Road in Scarborough, where she lived for about 14 years.

In 1938, eight years after Daniel Bragdon died, she married Philemon Ellery Renno, a French Canadian from Bend, Oregon.  She was 68 years old at this wedding.  In 1941, she sold the Scarborough house, and moved to Plymouth, Connecticut.

P.E. Renno moved back to Oregon, ultimately dying back in Ontario where he was born.

It took me months to discover where she was buried...thanks to all her surnames. It turns out she's buried at Forest City Cemetery, in South Portland Maine, next to her son Niles (who had died in France in WWI), and also next to 3rd husband, Daniel Bragdon. Her name in the cemetery records is "LIZZIE M. REMEA" which is a pretty bad misspelling of Renno. It took some creative digging to figure out she was buried next to Bragdon and with that misspelled name. Special thanks to City Clerk's office of Portland for their help in unraveling the mystery.

As an aside, the Tookers and the Clarks intermarried all throughout the 1800's in Central Connecticut, right next to the river (something in the water?). Lizzie's sister Francina married Niles' brother William, for instance. There are many more stories like this.

Below is the Forest City gravesite of Lizzie, her 3rd husband Dan Bragdon, and her son Niles Clark (who died in WWI).  My grampy, a stonemason, built this, and my mom wrote the inscription many years ago.  It has since faded.  Grampy also had created a metal flag holder on the left side of the stone.  This stone took a long time to relocate.


Pedigree Chart of Lizzie.  She is of 100% English colonial descent. 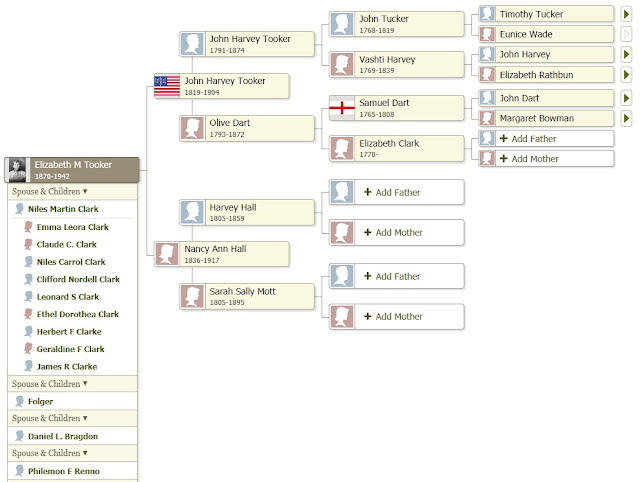 Posted by Scott Leonard at 8:03 PM