Patrick Joseph Wade (1833-1912) was a gardener born in the Burrow of Portraine, County Dublin to James Wade and Margaret Riley.  The Wade family were closely linked to my Leonard family during the Famine.  Patrick was godfather to Mathew Leonard's daughter Elizabeth.

Patrick arrived in Portland Maine in 1861, during the Famine, along with his father and some of his siblings (Peter, Alice, Mary Anne and Julia - baptized "Judith"), and later his father joined the family.

Patrick and his wife Jane McWilliams (1847-1907), who was also from Dublin, lived on 90 Danforth Street from 1866-1879.  Patrick bought 8 Briggs Street in 1867 from a Bill Lindsey.  Patrick lived there off and on (the primary tenant was Patrick's elder sister Alice & her husband Thomas, who was also a gardener).  Patrick and his family moved to the State Club Stables, in an adjoining rental house on 684 Congress Street in 1886, where Patrick worked as a hostler (stable hand).  In 1906, Patrick eventually returned to 8 Briggs Street.

Patrick's father, James, moved to Portland at some point prior to his death in 1871, although no Portland Census records seem to pick him up in 1870.  James died about 6 months before his daughter Mary Ann did.

Patrick & Jane married in Portland in 1866, and had twelve children:

-Jeanette (1891-1979) married Thomas Joseph Keough, who was born to Irish immigrants (and I've confirmed is no relation to the Nova Scotian McKeough family which married into the Portland Irish families of my research).  Incidentally, Thomas' mother's maiden name was Dunn.  This may have been a marriage of cousins.  They had three children, Bill, Ruth and John.  Jeanette worked as a typist at the railroad office, and this family lived at 50 Western Promenade, right across the road from the Western Cemetery.  Her son, William Joseph Keough (1919-1942), was a pilot with the Royal Canadian Air Force, and died as a result of air operations during WWII.

4.  Margaret G. Wade (1874 - ).  Maggie was given the house on 8 Briggs Street from her father in 1910 just before he died of senility.  She married Charles B. Lee in Portland, in February of 1914, and in April of that year she sold off the house to her cousin, Mathew John Leonard.  No further information on her yet. 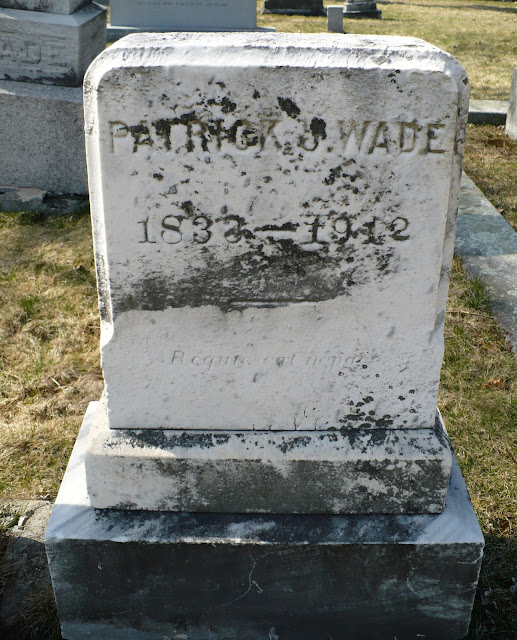