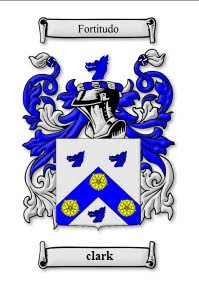 The English name "Clark" is technically how they pronounce "Clerke".  It was a name given to those who were gifted in scholarly pursuits...a lawyer, a religious figure, or a secretary.

I've been able to trace the Clark line from my grandfather, Herbert F. Clarke, to the birth in 1500 of Thomas Clarke, in England. However, other separate Clark lines also connect to my mother’s tree:

o Around 1530, Anna Clark married William Wyllys. They are ancestors of Lizzie Tooker.

o In 1665, Elizabeth Clark married Thomas Read, an ancestor of Lizzie Tooker. Elizabeth Clark’s line I was able to trace back to 1291, with the birth of Peter Clarke in Kent, England. His father’s first name was Clark, and he was born in Woodchurch England, so his name was Clark Woodchurch (as that’s how last names originated in the 13th Century and earlier)

o In the late 1660’s, Sarah Clark married Reinold Marvin, an ancestor of Niles Clark. Sarah Clark’s ancestry I was able to trace back to Thomas DeClarke, born 1350 in Kent, England.

The first Clarkes to arrive in the U.S., who were direct ancestors of Grampy:

o John Clarke, a tradesman from Cambridge, England, moved to the USA four years after his wife died in England, and landed at the Jamestown Settlement in Virginia in September 1608, in the third and last voyage of the ship the “Mary Margaret”. The voyage was called “the Second Supply”. His name can be read on the passenger list for that ship. He did not bring his 9 year old son Thomas on the long journey, but young Thomas would later migrate to Plymouth, MA. John lived in the Jamestown Settlement until his death in 1623. Since slavery had begun in 1619, it’s quite possible that John owned a slave, as slaves were used to harvest the tobacco crops they found in Virginia.

o John’s son, Thomas Clarke, from Stepney, England, arrived at Plymouth Rock on the “Anne” in 1623, although it is believed he was first mate on the Mayflower, but returned with Capt. Jones. His name can be read on the passenger list for the ship named "Anne". He met his future wife Susannah at some point prior to 1631. The family moved from Plymouth to Boston by 1660 and then back to Plymouth by 1673. Some of their time was also spent in Barnstable. He died 24th March, 1697 and is buried on Burial Hill in Plymouth. During his time in America, he held the following offices:

Thomas' son John moved to Lyme, CT in the late 1600's. The Clarks have maintained an existence in Lyme and East Haddam since then.

As mentioned in other posts, the original English spelling of "Clarke" dropped the "e" upon arrival in the New World, but occasionally the original spelling has still popped up in some family groups.
Posted by Scott Leonard at 11:37 PM