The Plummers of Raymond

The Plummer family of Raymond originally came from England just after the Mayflower, as part of the Great Migration.  The earliest settler appears to have been Joseph Plummer (sometimes spelled "Plumer") in 1633. Joseph and his son, Joseph Jr. (1654-1728), were early settlers of Newbury, Massachusetts.

The son of Joseph Jr was Aaron Plumer (1693-1755).  In 1728, Aaron Plumer received a land grant from the town of Scarborough, on the condition that he leave Newbury and settle in Scarborough permanently.  He arrived in 1730, and the area later came to be known as Plumer's Neck (now known as Winnock's Neck), but the name Plummer's Island remains at the end of Winnock's Neck:

Aaron's son Moses (1723-1798) was born in Rowley Mass, and migrated to Scarborough with his father, where he remained for the rest of his life.  He married Mary Dyer of Scarborough.

Moses' son was Jesse Plummer (1754-1822) who moved from Scarborough and was the first in the family to move to Raymond.  Jesse's son, William Plummer, Sr. (1782-1828), had ten children in Raymond, and is the patriarch of the very large Plummer family remaining in Raymond today.

William Plummer IV (great grandson to William Sr.) (1870-1943) married to Georgia Anna Edwards of Raymond, and had two children:  Hazel (who died at age four), and their only son, Elwin Herbert Plummer (1915-1973), who married my aunt Laura Clarke (1925-2009) (after Laura had divorced Elwin's cousin Charlie Bickford).  Elwin and Laura ran the Plummer Farm in Raymond (pictured below) until Elwin passed in '73. 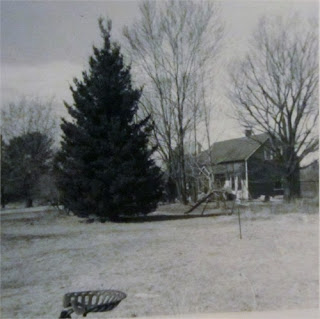 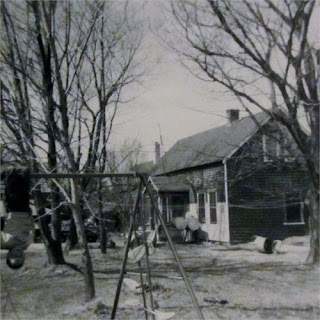 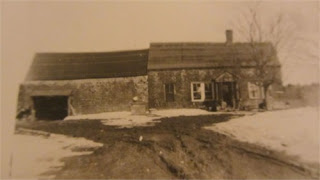 Posted by Scott Leonard at 11:32 PM No comments:

The Edwards Family of Raymond Maine

Elijah Hamblen Edwards (1844-1928) came originally from Otisfield, Maine (which was founded by his Edwards ancestors) and moved to Raymond along with his brother Francis when they were just teenagers.  Elijah married Eliza Jane Cobb of Poland Maine, and had six children together:

Fanny was unable to have children, but she adopted her sister Nell's son, Charles Granville Varney, when he was a boy, renaming him Charlie Bickford.  In 1945, Charlie was first to marry my aunt Laura Matilda Clarke, after divorcing his first wife, Phyllis Cummings.

2.  Nellie H. Edwards (1889-1985), nicknamed Nell, married George Albert Varney of Naples, Maine at the age of 15. They had a baby named Gertrude who lived from 1910-1912, and had Charlie Granville Varney in 1913.  Nell and George divorced shortly afterwards, and Nell gave Charlie up for adoption by her older sister Fanny.  She eventually remarried to Charles W. Guptill in 1920, and had one daughter, Myrtle Guptill (named after her Nell's sister), who died in an institution as a young lady.

3.  Granville Edwards (1891-1970) was a fireman who lived in Naples Maine with his wife Edith Gardner and their four children (Ernest, Arnold, Mildred and Ann).

4.  Charles Clinton "Tink" Edwards (1894-1983) moved up to Wilton with his wife Pearl and their four children, and worked in the woolen mill.  I believe his family may have also called him Clayton in addition to Tink.  Tink's oldest son, Leonard, was killed in action during WWII.

5.  Georgia Anna Edwards (1895-1975) married William Herbert Plummer in 1914.  She was known affectionately as "Georgieanne".  She and Bill Plummer had two children:  Hazel (who died at age four), and Elwin (1915-1973).  Elwin was the second man to marry my aunt Laura Matilda Clarke of Scarborough, and Elwin named one of his daughters Hazel, after his deceased sister.

The Edwards Family of Otisfield

The Edwards family of Otisfield Maine (which was part of Cumberland County until 1978, when it was annexed to Oxford County) appears to have come initially from Wales around 1700, with the migration of John Edwards, Sr. to Haverhill, Massachusetts.  His son, John, Jr., had many children in Haverhill.  Two of them, Jonathan and William, migrated to Otisfield in the early 1800s and were among this town's earliest settlers.

Jonathan Edwards (1747-1837) and his wife, Hannah Heath, migrated to New Hampshire in the 1770s and had their four children, including John "White Eye" Edwards, Sally Edwards-Morse, Nathaniel Edwards, and Stevens Edwards (more on him below).  This family migrated to Otisfield sometime prior to 1810.

Stevens Edwards (1773-1855) was born in Sandoun, New Hampshire.  He married Deliverance Hamblin of Gorham, Maine, and had eight children in Otisfield, including Stevens Edwards, Jr., who was nicknamed "Deacon Ronko". 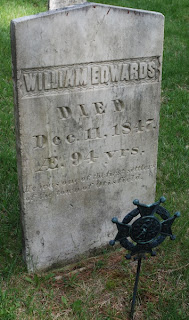 William Edwards (1755-1845) fought in the Revolution in Nathaniel Gage's Company, Colonel Garrish's Regiment of Guards.  He married Lydia Baker in Haverhill, Mass, and had ten children.  Their son, Ephraim Edwards (1797-1877), had two sons, Jonas and Dennis.  Dennis (1832-1898) married Sadie Temm, who was sister to John Henry Temm (mentioned above).  Dennis died of a head wound stemming from an accident (a Brunswick train bound for Portland collided with his horse carriage at "Curtis Corner" in Freeport).
Posted by Scott Leonard at 10:14 PM 2 comments: