The Mortensens of Berlin New Hampshire

Marius Hanson Mortensen, a gardener, was born in the Skrøbelev parish of Svendborg County, in Funen (fka Fyn), an island in Southern Central Denmark, in 1839, to parents Morten Larsen of Rudkøbing and Catrine Jacobine Christensdatter of Skrøbelev.  The Mortensen family farm and home is located at Vindeltorp Way in what is now a part of Rudkøbing, Langeland.

Marius fought in the 2nd Schleswig War against the Austrians and Prussians in 1864.  While Denmark lost, Marius was unharmed, and came home to his new wife, Kerstine Pedersen Nelsen of Skrøbelev (nicknamed "Stina").  Stina and Marius were married October 21, 1863 in Danish Folk Church, Simmerbølle, Svendborg, Denmark.  Stina was born in Botofte, Tranekaer, Langeland in 1837 to housemaid Maren Nielsdatter and farmhand and stonemason Peder Nielsen, who were married in June 1837 in Tranekaer Church. 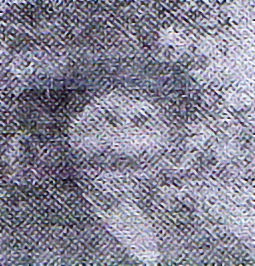 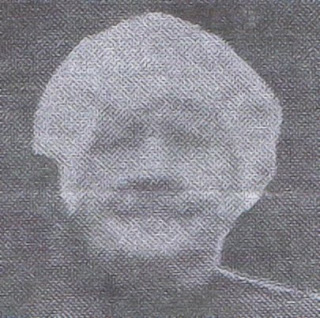 Marius and Stina had seven children in Skrøbelev:  Peder, Karl, Marenthine, Lena, Rasmus (aka Alfred), Lars, and Jørgen (aka John). As late as 1880, the whole family was still living in Skrøbelev.  Peder grew up with Stina's parents.

In April 1881, Marius & Stina, and the four youngest kids (Lena, Rasmus, Lars, and Jørgen) emigrated together from Liverpool to Halifax, Nova Scotia, Canada, and arrived in May, on the ship Hibernia.  Stina lied about her age at arrival, claiming to be 39, when she was 45.

They celebrated the birth of their 8th child, Marius Junior (who was nicknamed Miaus), born in Canada in December of 1882, while they were living in La Regione-Sherbrookoise, Sherbrooke, Quebec.

In 1884, the entire family moved across the border to Berlin Mills, New Hampshire, and settled on 1803 Hutchins Street, in the Liberty Park district of the east side of Berlin, upon land purchased from Brown Company, the mill which most of the family would work in.

Marius naturalized on October 31, 1890.  He was living at 1803 Hutchins Street as a tenant during the 1900 Census.  He officially bought the house in September 1905.  When he passed in 1926, he left everything to Stina, and left all the children $1.00 each.  When Stina passed, she left Lena $5.00 per week for each week she took care of her, to be calculated from her accounts (amounting to about $2,000).  The rest she left to Lena, Jørgen, Peter, Alfred, and Miaus an equal share of all property to 'share and share alike'.

Marius and Stina were founding members of St. Paul's Lutheran Church in Berlin: 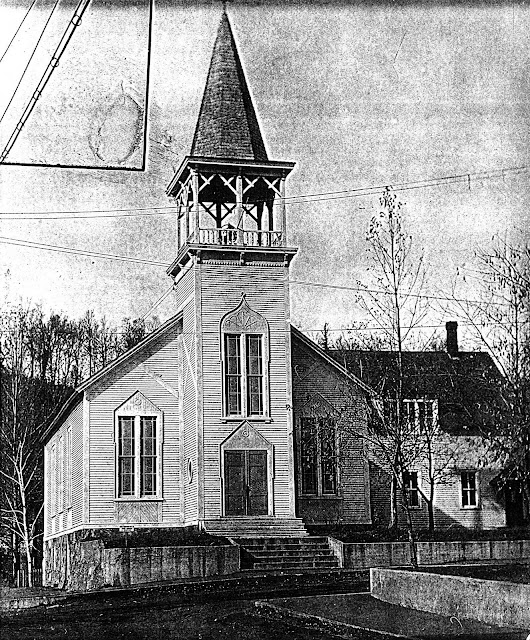 Here is a picture from the 1950s showing the lower end of Hutchins Street.  You can see the houses of Marentine Mortensen-Christiansen, Carl & Edla Mortensen (formerly Marius' homestead), and also Maius Mortensen's house as well as Jorgen Mortensen's house: 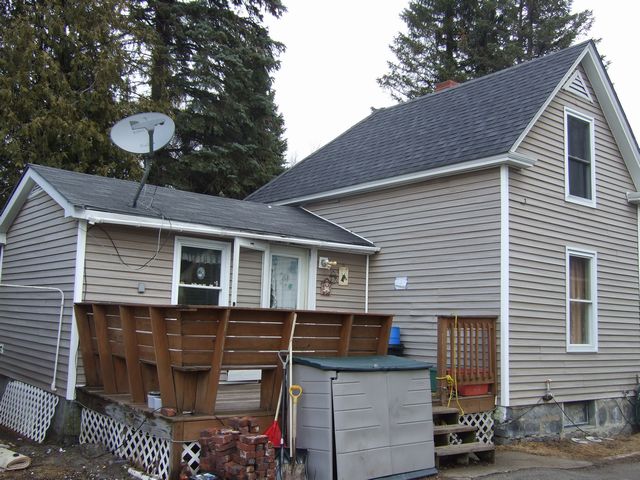 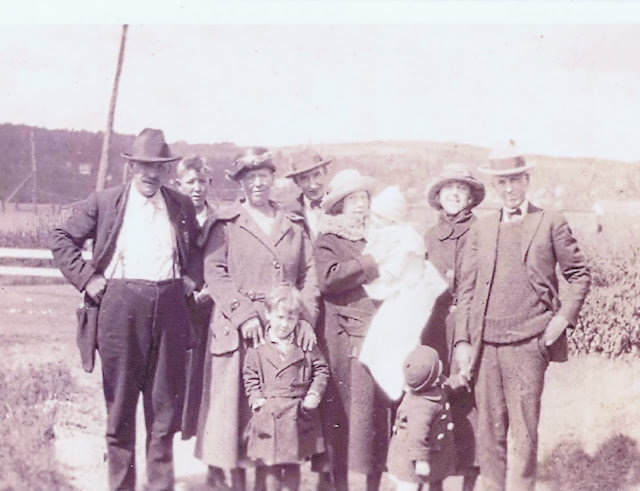 History of the Mortensen children: 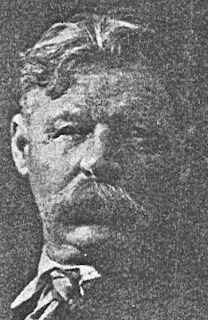 -Peder Nielsen Mortensen was born in Dec 1863 in Skrøbelev, but was raised in Simmerbolle Denmark with his grandparents. He was a merchant seaman. He shows up in the Wills of both Maius and Stina. He appears in a ship register from March of 1923 arriving in New York City.  He also appears in the Philadelphia 1930 Census for seamen, docking the Sea Tug Germantown. He was a wandering fellow, never settling down. He stayed for a time with his cousin Lillian Petersen-Nadeau in Westbrook, Maine (Lena's daughter), and Lillian's children became close with him and stayed in touch over the years.  I'm not sure when or where he died, but it was sometime after 1933 (date of Stina's Will).  Below is a writeup of Peder's travels, as it appeared in the Brown & Company Bulletin of March 1927: 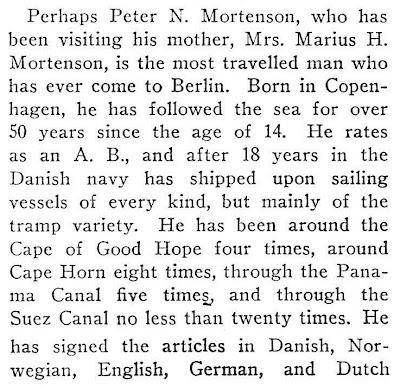 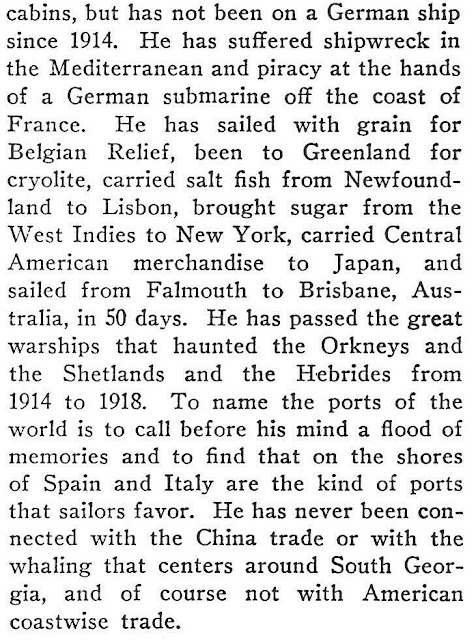 Peter was reputed to have died at sea. 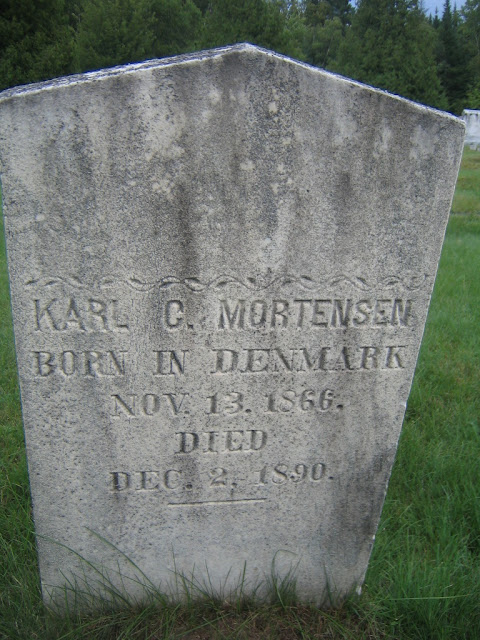 -Karl (or Carl) was born in 1866 in Skrøbelev, and while he took the journey with the family to Liverpool, Quebec, and then Berlin New Hampshire, he passed just a few years later in 1890 at age 24, and is buried in City Cemetery of Berlin.  He had married Alma Peterson just a bit over a year prior to his death.  I wonder if she was any relation to Christian Petersen, Lena's husband?  In any case, Alma wasted no time after Karl's death and married a Carl Nelson just a year later. 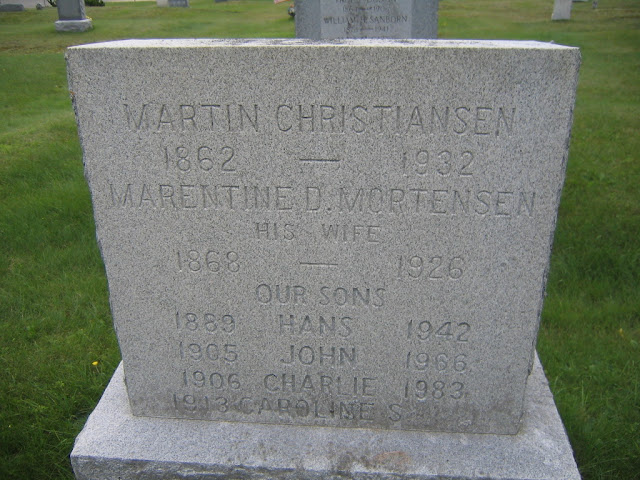 -Marentine (aka "Tina") was born in 1867 in Skrøbelev.  She arrived in Berlin independently of the rest of the family in 1886.  In 1891, she married Martin Christiansen from Norway, and bought the house on 1813 Hutchins Street, right next door to her parents.  According to many elders, the backyard was always well landscaped.  They had 6 children together, and she died in the winter of 1926. 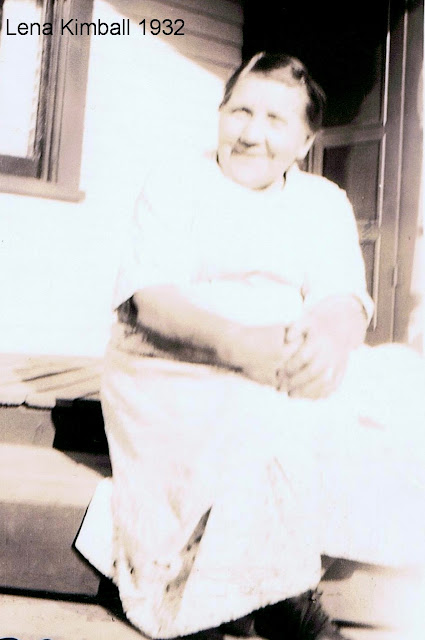 -Caroline Kirstine Mortensen ("Lena"), my 2nd great grandmother, was born in Skrøbelev in 1868, according to Danish records.  She traveled with her family to Canada, and lived in Berlin NH with them for a short time.  While in Canada, she met an Aalborg native named Christian Peterson, who had also migrated through Canada to Berlin for millwork.  They married in Canada in 1882, moved to Berlin NH in 1886, and by 1891 they had moved to Westbrook, Maine, where there was better millwork to be had for Christian.  There they had ten children, including my great grandmother Agnes.  After Christian died in 1908 in Westbrook, Lena married Edward Kimball from Windham Maine (who was father to her son-in-law James, and was the original owner of their house in Westbrook).  After Edward died in January of 1926, she moved back to the house on Hutchins Street in Berlin to take care of her parents.  Her father Marius died in July of 1926, of a cerebral hemorrhage, and her sister Tina died in December of that year. Her mother Stina died in 1933 at the ripe old age of 98, also of a cerebral hemorrhage.  Stina was "Berlin's oldest woman" when she died, according to her obituary.  Lena died in 1939, of myocarditis. Lena's brother Alfred was the informant on her death record. They are all buried at City Cemetery in Berlin. 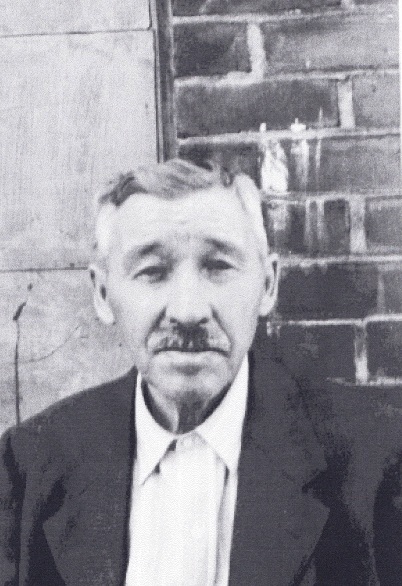 -Alfred "Rasmus" Nielsen Mortensen (1870-1948).  Of Marius' children, Alfred had the most descendants. As of October 2011, well over 80 people can claim descent from old Rasmus, many of them living in Berlin today!

-Lars was born in Skrøbelev in 1872, according to Danish records. He lived in Berlin, and worked at the mill with the family.  He died of a self-inflicted gunshot wound in 1916.

-Jørgen "John" Nielsen Mortensen was born in Skrøbelev in 1877, according to Danish records.  He did not arrive with the rest of the family in the USA, since he was not of age (I'm assuming he was cared for by Stina's parents), but he moved to the USA After arriving in the USA, he changed his name to John, got a job as a shoemaker for the Maine Railroad, and moved to Lewiston, Maine, marrying Sybil Barrett-Gammon in 1920.  He later worked as a painter.  They eventually moved to Litchfield, Maine for a while.  He fought in WWI, and ended up in living and retiring with his brother Miaus at 8 Sulley Street in Berlin, NH.  He is mentioned in his father's will as well, with the name John Mortenson.  He and Sybil had no children.

-Miaus (aka Morris/Myers), born in Quebec, started out in the yard crew at Brown Company in 1896, worked as an electrician, landscaper, and than later a janitor, at the Mill where the rest of the family worked.  He retired as a watchman in October 1949.  He was only 5'5", with a stocky frame, large forearms, a pointy chin, and smoked a pipe.  He was nicknamed "Popeye".  He lived at 1787 Hutchins Street with his wife Minnie Oleson (cousin to Annie Oleson, wife to Miaus' older brother Alfred), and had five children.  His son Theodore took over the house in the 1950's, and Miaus moved around the corner to 8 Sulley Street, where he retired to with his brother Jørgen. Miaus' son Franklin bought a house across the street on 1816 Hutchins Street.  Miaus died in 1956.

Here are a few pictures of their houses all along Hutchins Street: 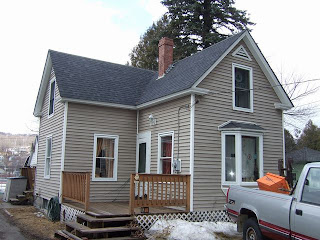 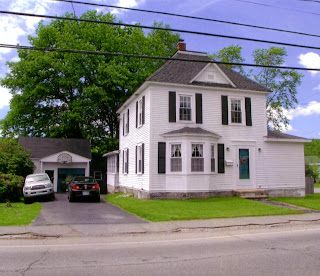 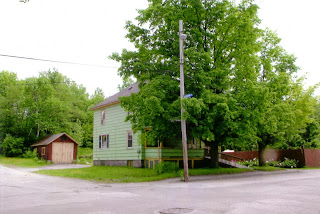 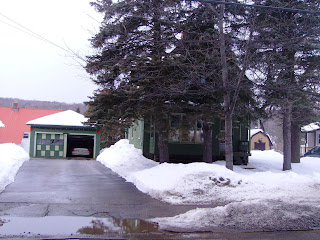 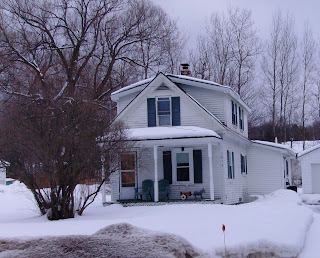 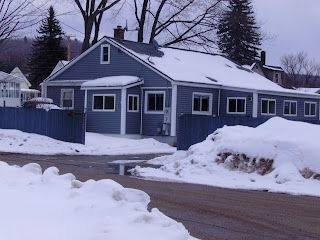 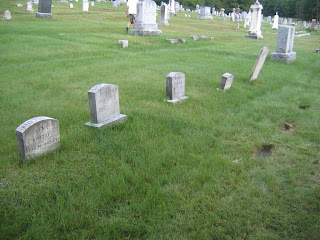