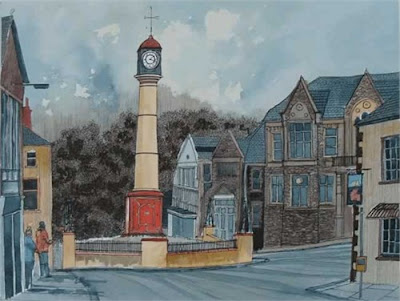 It is believed that Robert migrated on his uncle Richard Morgan's ship The Phillip, which landed in Jamestown Virginia in 1635.  He soon migrated north to Salem.

Records of Salem first sees Robert in 1636 when he was given an allotment of 20 acres there.  He married on 27 Jan 1638 to Margaret Norman, b. abt 1620 Somersetshire, England, daughter of Richard Norman Sr and Margaret Alford. Together they had eight children:

In A History of Salem, Massachusetts, Vol II 1638-1670 by Sidney Perley (1926), Robert Morgan is listed in 1667 as one of the "leading men" helping to build a meeting house for a pastor named Mr. Hale before the town of Salem was founded. A Lieutenant Dixey (probably William Dixey, whose daughter Elizabeth married Robert Morgan's son Samuel) was also one of these men.

In 1685 Robert Morgan was fined 1 pound for "being overseen in drink."

Robert's son Samuel (1637-1698) died in Beverly, and must have bore witness to the Witch Trials, even though he wasn't directly involved.  His son, Samuel Jr., and grandson Samuel III, were each my ancestors.
Posted by Scott Leonard at 3:29 PM 1 comment:

The Blairs of Ayrshire Scotland

The surname Blair was first used in the Scottish/English borderlands by the Strathclyde-Briton.  The first Blair family lived in the village of Blair, in County Ayrshire Scotland.  In ancient history they were known as the DeBlair Clan, being that they were "of Blair".  Their clan fought alongside Robert the Bruce and William Wallace in the 11th century.  Many genealogists have traced this line back as far as 1033, just prior to the Norman Conquest.  It's reasonable to assume that many lines have no older data.

A large number of Scottish Blairs, however (like many Scottish border clans), were banished by King James in the early 17th century, and forced to moved to Northern Ireland to help Scotland settle the historically Gaelic land and make it Protestant.  These people were known as the Ulster Scots.

David Blair (1603-1655) my 8th great grandfather, was born in Blair, Ayershire, Scotland, and worked in textiles.  He was part of the Blair clan that was banished to Ulster, Northern Ireland.  He and his wife (Bessie Watson) migrated to Aghadowey, in County Londonderry, Northern Ireland in the mid 1600s, and started a family there that lasted in Aghadowey for only two generations.

David's son James (1644-1732), and his grandson Robert Blair (1684-1775) was born in Aghadowey.  Robert and his wife, Isabella Rankin, had many children, including my 5th great grandfather, Captain William Blair (1718- 1791).  Robert & Isabella and family (including Robert's parents) sailed to the New World in 1733, and landed in Massachusetts.  Robert died at 91 at the beginning of the American Revolution.  Many of his descendants remain in Massachusetts today

His son, Captain William Blair, made extensive purchases of land as early as 1744 in Worcester & Blandford, Massachusetts and also in Voluntown, CT.  He earned the rank of captain and served in many pre-Revolutionary campaigns in New England.  William left Massachusetts with his regiment in the fall of 1759 (also with his new wife, Jane Barnes), and started a settlement by driving the French settlers out.  The settlement occurred in Onslow Township in Colchester County, Nova Scotia, where their son James was born.

John & Isabel were my 3rd great grandparents, and their children moved to Portland Maine, where their descendants still live today.  John and Isabel lived in Machias Maine toward the end of their lives, and John served time in Maine State Prison.  John died in either Machias or Nova Scotia by 1868, and Isabel died in Salem, Massachusetts of lung congestion in November of 1870.

In doing some research at the Mormon library, I was pleased to see that someone had saved a document that indexed all birth, marriage and death records from Nova Scotia newspapers in the 1800s.  Here is an abstract of the announcements I found as they relate to Blairs living in Nova Scotia, even though I don't know yet how they figure into my family: