Francis Leonard (1859-1945) was baptized in April of 1859 at Donabate Parish.  He was son to Mathew Leonard and Anne Brien, of the Portrane Cottages, Burrow Road, Portrane, Donabate, Dublin.

Frank (known by his loved ones as Fransheen), was a great believer in Irish fairy culture, according to old Paddy Lynders who lived in the Burrow near Frank.

As mentioned in his father's blog post, the Leonards were hit hard enough by the Famine to seek employment elsewhere.  Thomas D. Leonard was the first to leave the Burrow of Portrane, in 1850, and started a successful florist business in Portland Maine.  After a couple decades there, Thomas had purchased an entire block of the West End of Portland (Briggs Street), built houses there, and summoned his family over.  His nieces and nephews heeded the call, and Frank sailed to Maine with his brother Mathew John in 1881, along with other siblings.  Frank lived in Portland for three years, having worked at JB Brown's sugar mill in Portland.  But, he missed Dublin, and moved back in 1884, living at the old family homestead at House 15 in the Burrow, eventually taking over the lease upon the death of his father Mathew in 1904.
According to Paedar Bates' Donabate and Portrane, a History, Frank was a member of the Gaelic Football Club of Donabate at some point.

Frank first married to a Catherine Kent of Rush, in 1898, and she died in Portrane of tuberculosis at age 27, in 1901.  They had no children.

On August 11, 1904, he married 17 year old Margaret Byrne (1887-1961), by pastor Anthony Murphy, at the newly erected St. Patrick's Roman Catholic Church in Donabate (which had replaced the older and smaller one just across the street).  Margaret was born in Dublin, daughter of Joseph Byrne and Margaret Reilly of Balcunnin.

Frank and Margaret had eight children: 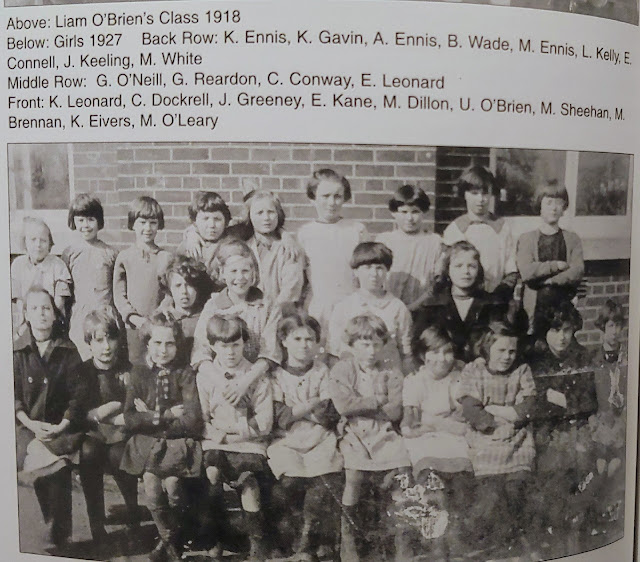 8.  Alice Leonard (1917-abt 2002) (named after Frank's sister).  She married William McLoughlin in 1939, and had a daughter Ann.  She made a visit in 1964 to the Portland family, and she hosted her brother Mathew's and Elizabeth's children when they visited her in Donabate, Dublin.

On March 1, 1913, the School Committee brought Frank to court because his son Tommy failed to attend school.

On June 19, 1915, Frank brought his sister-in-law (and neighbor) Mary into court because she hit him in the face with a shovel.  But she also brought a counterclaim against him for grabbing her by the back of the neck and throwing her violently against the hedge.  The case was adjourned until August, where neither of them appeared in court. 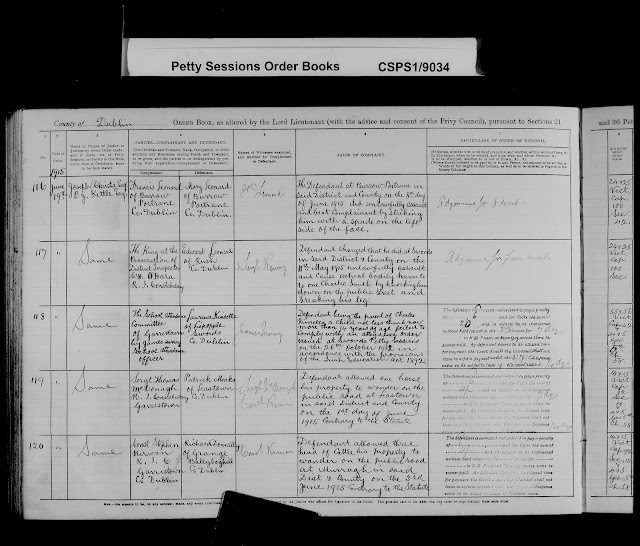 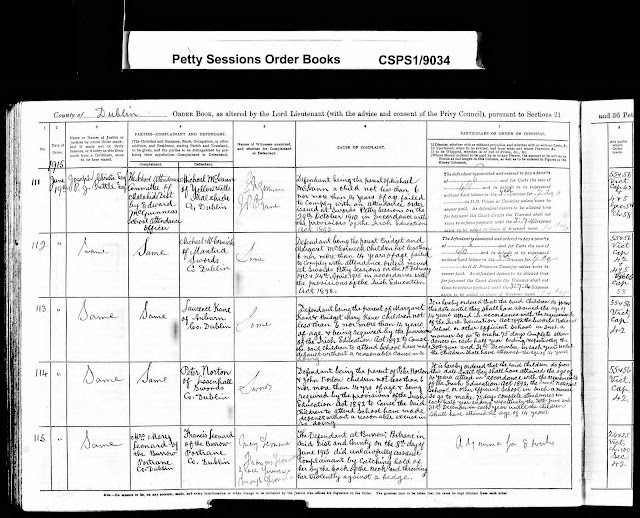 On November 4, 1916, neighbor Margaret Kelly assaulted Frank's wife Margaret, by pulling her by the hair across the floor.  Mrs. Kelly failed to appear in court.

Frank applied at least twice for dog licenses, in 1896 and 1898.  He owned red terriers (his father Mathew owned terriers as well, so Frank had grown up with them). 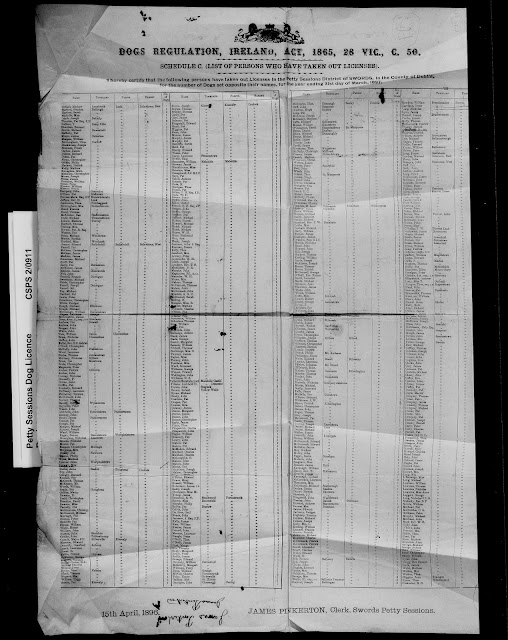 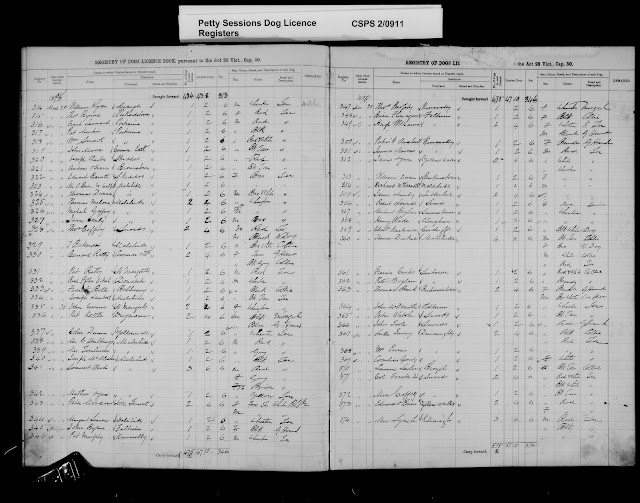 Based on the fact that Frank had marked "X" as informant of his father's death certificate (1904), his marriage license (1904), and also on his son Thomas' birth certificate (1905), it stands to reason he wasn't able to write - either during that time period, or permanently.

Frank farmed the land for most of his adult life.  At some point, the land was deemed unsuitable, though, and his son Thomas had to find other work.

In 1922, Frank and his family likely celebrated the liberation of the Irish Free State from the United Kingdom.  In the 1940s, about a year or two before he died, Frank acquired title to the Portrane Cottage that had been so long in the hands of the Estate of George Evans.  Upon his death in 1945, the fee land passed to his son Tommie, and is still in the hands of this family today.

Frank and Margaret are both buried at Old Donabate Parish Cemetery, next to an old limestone gravesite that may in fact be where his father Mathew is buried, and surrounded by grass (also potential other Leonard burial sites).

Posted by Scott Leonard at 11:17 AM No comments:

Patrick Leonard was born in 1795 at the Portrane Cottages in Burrow Townland, son to Thomas Leonard (who was likely the first Leonard to arrive in the Burrow).

Patrick was a tenant farmer to Irish landowner Joshua Evans, and had at least seven children with his wife Elizabeth Horish:

1. Mathew Leonard (1819-1904) (my 3rd great grandfather), who inherited the land from his father Patrick upon his death in 1865.  Mathew married Anna O'Brien of Blanchardstown, and had eleven children, most of whom migrated to Portland Maine in the 1880s to be with their uncle Prod (see below).  Two of these children (Frank and Patsy) came back home to Portrane to take over ownership of the houses upon Mathew's death.  During the time of Mathew, according to the 1901 Census, the family house had only two rooms, and outside there was a cow house, a stable, a fowl house (referred to as out-offices by the Census).  By the time of the 1911 Census, Mathew's son Frank had the homestead, and had added a second cow house to the out-offices.

2. Elizabeth Leonard (1824-__), who married a John Harrison.  I wonder if John was a relative of Eleanor Harrison, the wife of the landlord?  There was a James Harrison in Donabate Parish records whose son Nicholas had Mathew Leonard as his godfather in 1850.  Elizabeth had some issues with her elder brother, Mathew, according to court records.  Apparently Mathew was often litigious against his sister, and others in the Burrow, for letting her chickens onto the crops on his property.

3. John Leonard (1826-after 1897) appears in a Donabate Parish baptismal record on April 16, 1826.  He may be the same John Leonard of South Dublin who married Lucy Dunne in 1867, since on this marriage return, he named his father to be Patrick Leonard.  He may also be the father to a John Leonard (1854-1906) who died at Portrane Mental Asylum (St. Ita's).  John appears in at least five Burrow dog license registers:


4. Thomas D. Leonard, (1828-1912) nicknamed "Prod," a gardener who emigrated in 1850 to Portland Maine, and married Alice Wade.  Prod started the wave of Leonards in his family moving to Portland from Portrane.

5.  Ellen Leonard (1829-___) (and her husband Thomas Keane) are offering their son Patrick for baptism September 10, 1848.  Mathew Leonard is listed as godfather, so it's quite likely that Ellen is another daughter of Patrick.

Patrick (aka "Pat") appears on the Burrow tithe books in 1833 below: 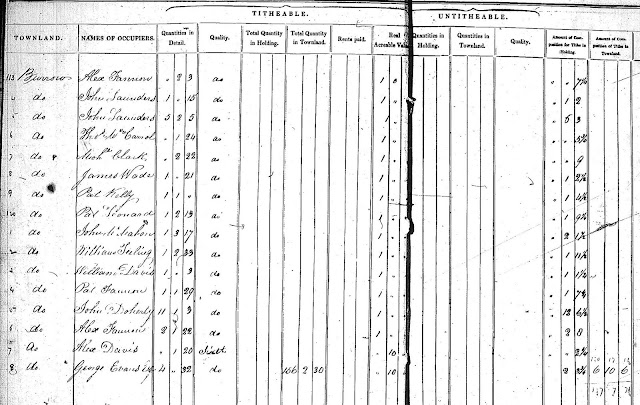 A word about the tithe system from above:

From 1823 to 1838, there was a law called the Tithes Composition Act.  This required all Irish citizens to pay a monetary compensation to benefit the Irish Anglican Church (instead of an amount representing a portion of fee land holdings), regardless of whether the citizens attended this church.  I believe my ancestor Pat Leonard was a Catholic, so it's likely that he is listed above as having paid money to a church he didn't attend.  There was a rebellion in the 1830s whereby the peasants refused to tithe the church.  The rebellion was so popular that Great Britain couldn't enforce the Act.  In 1838, the Act was repealed, and a new law was put in place, requiring all Landlords to do the titheing.  Of course, Landlords simply raised the rent on their tenant farmers in response.  But it calmed the masses, as they didn't feel robbed by the Crown.

See Patrick's listing below on line 22 and 34 of the Burrow section of the 1847 Griffiths Valuation, where it shows the Burrow's majority landlord to be Joshua Evans, Esq. (who was also then a Commissioner to the Court of Bankruptcy).

Also below are the Wade and Smart families, also figuring into the Leonard family: 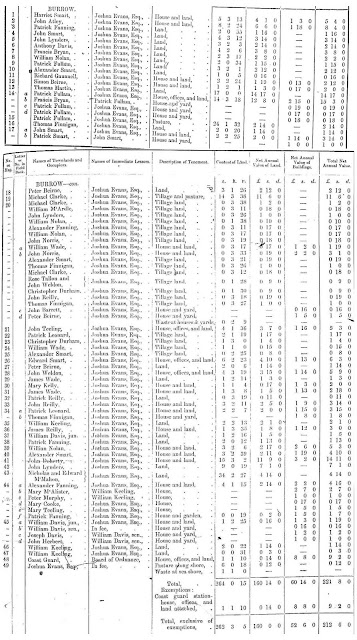 Patrick died in the Balrothery Workhouse in 1865 (just a few months after his father Thomas died at the Portrane Cottages).  I have yet to review the Minute Books from this place, now available online, to try and learn more about Patrick's time there.  While none of the Leonards died of starvation, it's clear that there were financial troubles stemming from the Famine, and the Workhouse was often a place for people to go when they needed care or a place to live.  It's interesting to me that Patrick had still owned the houses in Portrane at the time, which passed to his son Mathew after his death.  Was the house too crowded for Patrick?  Was there a disagreement with his son?  Did he need some kind of care that Mathew couldn't provide?  I may never know.

Across the road from the Workhouse is a mass grave with a single tall Celtic cross, bearing no names, but erected in 1918 "to the memory of the many unfortunate people who lie buried in this sad place."

I wonder if Patrick is buried in this mass grave, or if he is buried alongside his other family at Old Donabate Cemetery? 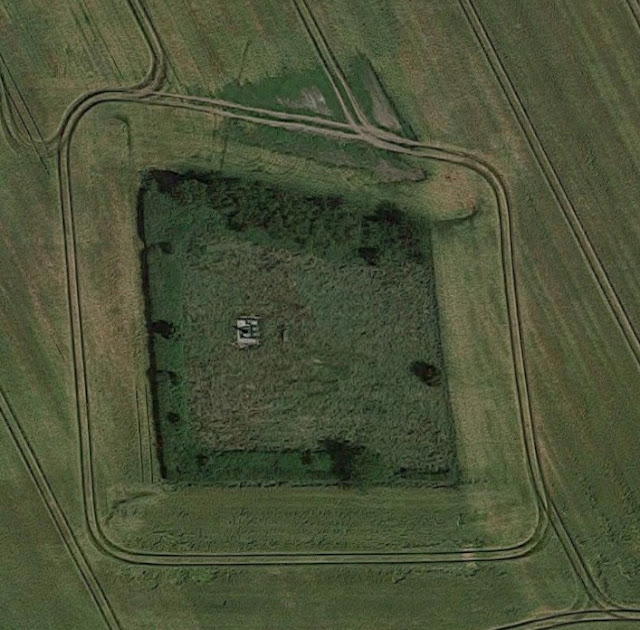 Posted by Scott Leonard at 7:56 AM No comments: