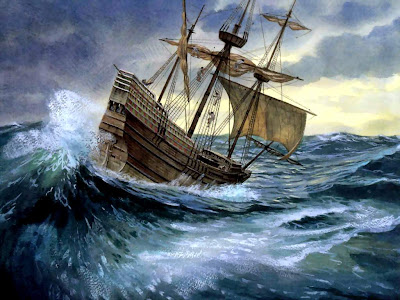 There are two established Mayflower links to Charles Murch, my father's maternal great grandfather. They are passengers Stephen Hopkins and Francis Cooke. 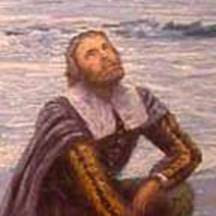 STEPHEN HOPKINS OF THE MAYFLOWER

Stephen Hopkins (1581-1644) was a “stranger” from the Mayflower, which was a term given to the passengers who were NOT escaping religious persecution, but were heading to the New World for personal reasons. Hopkins and his family were recruited as planters and he was viewed to be a potential governor of the New World. Upon arrival in Plymouth, Hopkins was elected the first Mayor of Plymouth, and an ambassador to Indian relations, due to his experience in Jamestown. 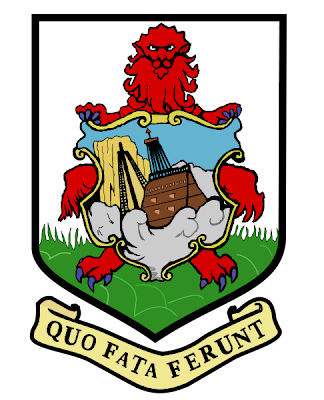 Hopkins had earlier sailed to Jamestown on the Sea Venture, an ill-fated voyage that wound up shipwrecked on the shore of Bermuda, marking the first English arrival for that island. He was the force behind a mutiny that thought the authority of the Governor ceased when the ship was wrecked. He was sentenced to death, but pardoned. The story of this voyage inspired Shakespeare’s play The Tempest. Hopkins and the other castaways later fashioned two new ships with Bermuda driftwood and the remains of the shipwreck, and sailed to Jamestown, where he lived for two years before returning to England.

While in Plymouth, Hopkins ran afoul of the law several times, for assault, for not properly regulating other people’s alcohol intake, and for overpricing sales of alcohol to others.

Hopkins was respected for his previous experience with Indians and was elected ambassador for native relations. When Squanto arrived in Plymouth he resided with the Hopkins family. In 1621 Hopkins, Edward Winslow and William Bradford were delegated by their associates to treat with the Indians in the Plymouth vicinity on behalf of the Pilgrims and succeeded in winning the friendship of Chief Massasoit (1580-1661), concluding a peace treaty on 22 March 1621 in the Hopkins home. He later served in the Pequot War of 1637.

REPLICA OF HOPKINS HOME IN PLYMOUTH

Hopkins’ daughter, Constance, through his first wife Mary (who died prior to the Mayflower voyage), married Nicholas Snow. They are one pair of ancestors of Charles Murch.

Hopkins’ 2nd wife, Elizabeth Fisher, had many children prior to the voyage, one on the voyage, and several in Plymouth. Their daughter, Damaris Hopkins, who was one of the first children born in Plymouth Colony, married Jacob Cooke (son of Mayflower passenger Francis Cooke), establishing the second Mayflower link to Charles Murch. 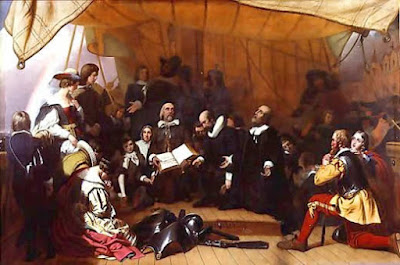 LEIDEN SEPARATISTS ON THE SPEEDWELL

Francis Cooke (1583-1663) sailed on the Mayflower like the others, but was one of the English puritans who were living in Leiden, Netherlands to escape religious persecution, before coming back to England on the Speedwell in time to make the Mayflower voyage.  He and his oldest son, John made the voyage together, leaving behind the rest of the family in Leiden until they could be sent for later on the Anne in 1623.
In addition to his work as the first surveyor if Plymouth, Francis was active in Plymouth civil affairs in the 1630s and 40s - committees to lay out land grants and highways, petit jury, grand jury, coroner's jury. He appears on the 1643 Plymouth list of those able to bear arms. At some point in 1638 or afterward, he settled at Rocky Nook on Jones River, within the limits of Kingston, a few miles from Plymouth. He died at age 80. As mentioned above, Jacob married Damaris Hopkins. 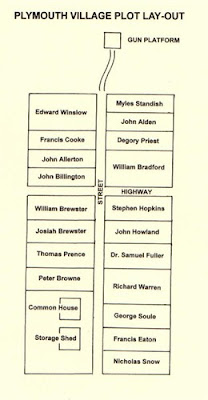 Above is an image of how the first land layout was drawn for each settler. Cooke and Hopkins are shown, as well as Snow (who came over on the Anne, and married Hopkins' daughter Constance). Also showing are Fuller and Alden, ancestors of Arthur Fuller.
Posted by Scott Leonard at 3:38 PM