Maud Miles (1871-1944) was a very active and dynamic personality, and a hero to us Fuller genealogists.  It's thanks to her painstaking work that we have many documents, diaries, and family trees passed down to us, so I felt it prudent to do a biography on her.


During the time of Maud's birth, Etta and William were moving around Iowa a bit, and lived for a time in Iowa City and also Ottumwa (where Etta and her parents and siblings had moved to from Maine in 1863).

Around 1881, when Maud was ten, the Maple family moved to Chicago (perhaps this was a better fit for William's law practice).  Her brother William Jr. was already seven, and her sister Nina Grace Maple would be born in Chicago in 1883.

Maud's talent for art was obvious to her parents, and she was enrolled in Chicago Art Institute, where she was taught by Arthur Wesley Dow.

In 1893, she participated in the World's Columbian Exposition.

In 1895, Maud married David Anderson Miles, a civil engineer from Indiana and Kansas.  Perhaps they met at the Institute.


Immediately after the wedding David and Maud moved to Kansas City, Missouri.


Their first child, William Maple Miles, died in childbirth in November of the year they moved.

Their second child, Mildred Irene Miles, was born in Kansas City in 1898.

In 1904, Maud's work was featured at the Louisiana Purchase Expo of the St. Louis World's Fair.  Later that year, her husband David died on Christmas Eve at age 36, leaving his 33 year old wife and 7 year old daughter behind.

Maud soldiered on, continuing in her job as a Kansas City public school art teacher at Manual Training High School.  On that salary, she managed to support young Mildred.  She got lucky and was hired to engrave bronze trail markers along the Santa Fe Trail in Missouri, including the one below: 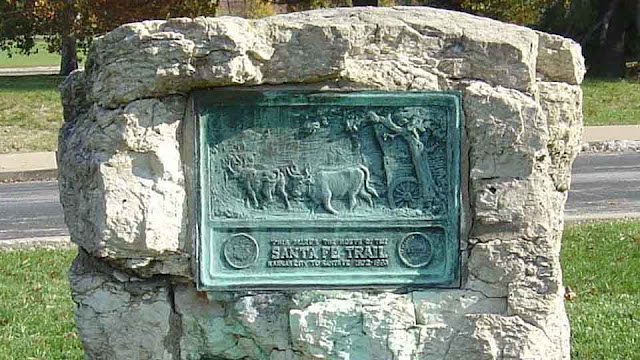 In 1907, Maud's work was featured at the Art Institute of Chicago's "Annual Exhibition of Water Colors, Pastels and Miniatures by American Artists".

At some point just before 1920, Maud and Mildred moved north to Lombard, Illinois, where Maud's parents were living at the time.  Maud's father William died in 1920, and her mother Etta died in 1922, both in Lombard.  Maud's daughter Mildred got married in 1921, moved to Chicago, and ultimately traveled the world and later remarried.

Maud continued her work as an artist and art teacher in the Chicago area at this time.  She also painted many large pictures of California missions for the Santa Fe stations across the country.  On one visit to her cousins' home in Elmhurst, the family went to Addison, where she painted a picture of the old windmill standing in solitude in the midst of acres and acres of farmland. The mill later became the focal point around which Mt. Emblem cemetery was planned.


According to a few websites, Maud was also known for being a writer, color theorist, painter of Western scenes, and bas relief sculptor.  Her work was also featured at one point in the Smithsonian Collection in Washington DC.

One of her lecture series was published in the form of "Short Talks to Art Students on color from an Artist's Standpoint:  Also Dealing with the Relation of Color to the Musical Scale" c. 1914, Kansas City.

The University of Chicago's weekly Music Magazine in 1920 featured a writeup on her color music theory: 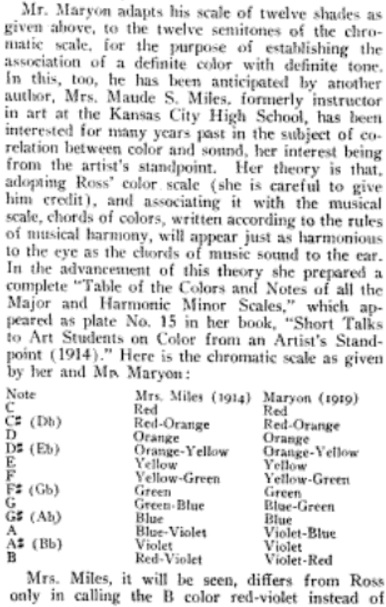 From that, she is frequently credited as the inventor of the term "color music" as a new art form.  In the book Brian Eno: Visual Music, Maud is mentioned: 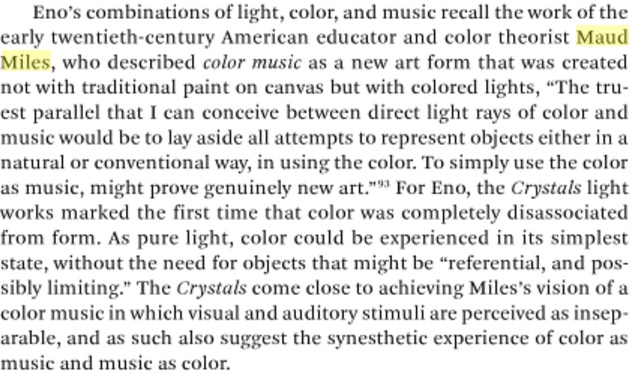 Now, as shown in the first writeup, Maud always gave credit to elder researchers in color theory, and to be fair, the concept originated with Pythagoras and was carried forward by French theorists in the late 16th Century.  Maud merely advanced the theory for the 20th century in America.

Maud died in Wilmette, Illinois in 1944 at age 73, in the care of her daughter Mildred (and Mildred's children Winifred and David).

Maud and her husband David are buried at Forest Hill Cemetery in Kansas City.  This blogpage is a tribute to her as an artist, a family member, and a diligent genealogist, as passed down by her granddaughter Winifred Marks, who also worked in the education system and was a published author of her own right. 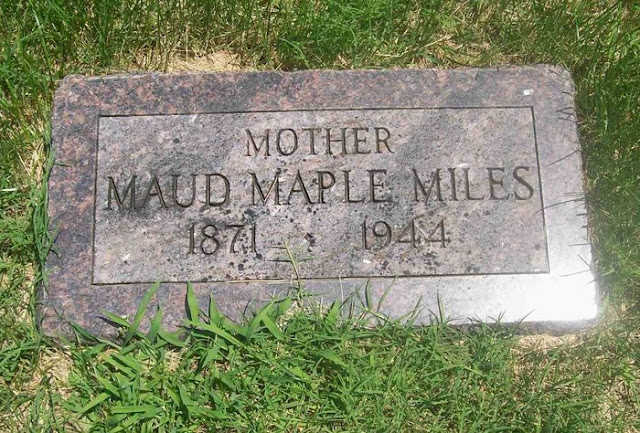 Posted by Scott Leonard at 9:24 PM No comments:


William Lee "Bill" Clarke (1919-1996) was Town Clerk of Westbrook for a record 38 years.  I recall when growing up there that he often ran unopposed, and I myself voted for him when I came of age to do so. I had often wondered if he might bear any relation to my extensive Clarke family of Maine, and Connecticut before that, which had originated in America at the Jamestowne Settlement in the early 1600s with the arrival of John Clarke.  I was surprised and delighted to discover in 2015, upon researching the matter, that an ancestor of Bill's had come from Connecticut, so there may be a distant connection (more on this below), but nothing definitive can be found as yet.

Bill Clarke was born in 1919 in Westbrook, and for the first few months of his life the family lived on 111 Mechanic Street, corner of West Valentine, just eight years after the migration of his father, Lee Elbert Clarke, from New Canaan, Canada in 1911.  Lee lived on Manners Avenue in Portland upon his naturalization in 1914.  He married Casco-born Millie Dawn Scribner in July of 1916, and bought the house on Mechanic Street shortly thereafter.  Lee worked as a bookkeeper at Parker & Thomas Company in Portland, and had lost his arm, and was thus exempt from the draft during WWI in 1917. I learned from a grandson of Lee's that this was due to a hunting accident in Canada in 1909 when Lee was 20 years old.  It isn't known if the gun fell over or what happened, but his injury was sustained to the left arm, back of the wrist, and therefore his arm was amputated just below the elbow.

The Clarke farm house on Spring Street was originally built in 1910 for William B. Bragdon, who later became mayor of Westbrook. Bragdon lived there for about a decade, and was known for having given a public speech from the front porch around 1919, the year he was elected Mayor (one year term).  Not long after the election, in April 1920, Bragdon sold the house to Lee Clarke and William Scribner (Lee's father-in-law), when Bill Clarke was about 7 months old.  Lee maintained his bookkeeping practice, while his son Bill eventually ran a dairy farm there called Blue Spruce, and he used to deliver the milk door to door.  Blue Spruce continued in the family until the late 1980s, and Bill would also eventually sell his milk to Oakhurst Dairy in Portland.

From 1943 to 1949, Bill worked on Westbrook City Council, and at the end of this run he married Jackie Rochelau, whose father was a WWI veteran, and business owner, born to French Canadian immigrants.

In 1956, Bill Clarke ran for Town Clerk, a post he succeeded to and kept for 38 years, elected for 19 consecutive two year terms, until 1994.  In addition to working tirelessly to help many people obtain their fishing and hunting licenses, he was the officiator of many thousands of marriages of Westbrook's citizens, including my own mother's second marriage in 1980.  Clarke made a comment to mom about their shared name, and they joked together about the possibility of a relation.

Bill officially gained ownership of the house and farm in August 1977, when his elderly mother and two siblings deeded the land to him and Jackie.

Bill Clarke passed in 1996, and is buried in Woodlawn Cemetery in the family plot with his parents and siblings.  He is fondly remembered by many in Westbrook for his kind nature and encyclopedic mind. A couple years before his passing, Wayside Drive in Westbrook was renamed "William L Clarke Drive".

Bill's father Lee is shown in this family photo, he's second from the right, amongst his brothers.  In the second row is seated Gesner and his wife Melissa.  (Courtesy of Haddon Clarke family) 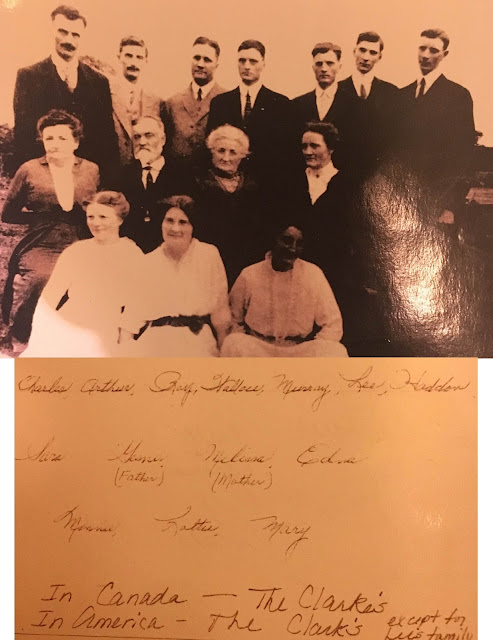 Nehemiah's father, Elias Clark, was from Hartford Connecticut, and appears to have migrated to New Brunswick, Canada in 1779, just after the Revolution.  This could one day bring me to a Connecticut connection between my family and his.  One thing I've learned, is that Elias' father was named Joseph Clark, but he is not to be confused with a Joseph Clark III of Middletown.  This Joseph was indeed an indirect ancestor of mine, and records and DNA testing have proven to me that Elias is not the son of this Joseph.  However, it's possible that this Joseph of Hartford (born abt 1730) may also be a relation, yet likely more distant.

The Future of the Clarke Farmhouse

Mr. Clarke's farm and house lot was sold to Risbara Construction in January of 2014.  There are currently discussions of converting the property into a mixed use development (and there are mixed reactions to this among the City's residents).