Bryce McLellan (1692-1776) and his wife Jane (1692-1740), my 7th Great Grandparents, were what was known as "Scotch-Irish". These were Scottish people that fled Scotland, and it's king (James II) and his persecution of their Covenant branch of Presbyterianism, to live in Northern Ireland, although some of the more wealthy Scottish were expressly invited by the King to Ulster at this time to settle the area and "make it less Catholic."

This group of Scotch-Irish had lived in Northern Ireland for three generations.  In the 1700’s, many of them began settling in downtown Portland Maine (then part of Falmouth), where Bryce became known as the "town handyman", and was nicknamed "Mac", according to Maine Historical Society, since there was little call for his weaving skills on the waterfront.  He became an invaluable tradesman and laborer, doing odd jobs and working small trades.  At the time of his death, he had taught his sons well, and they each became wealthy high society shippers, tradesmen, and landowners.

Cousin Hugh McLellan (1710-1787), also referred to herein as "Gorham Hugh", whose father and grandfather were also named Hugh, but stayed in Northern Ireland, settled in Gorham (his house is an historic landmark).  He was a farmer and timber supplier to the maritime industry. 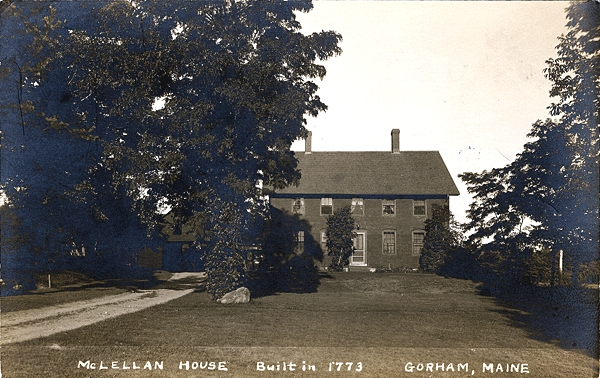 James settled in Saco.  Hugh stayed with him for a time.
The idea that Bryce and Gorham Hugh were cousins is somewhat disputed by the below newspaper clipping, declaring that Mary, daughter of Gorham Hugh, and Joseph, son of Bryce were McLellans who married:
In 1730 or so, upon arrival in Portland from Northern Ireland, Bryce built a small house on 97 York Street, corner of High Street.  He owned a large portion of the land there, and his house was one of five that survived the fires of Mowatt in 1775:
Little did Bryce know at the time that his land would become valuable, and that the location of his land ownership would situate him to become a wealthy shipping magnate.  At the time Portland had yet to be established as an important shipping port, so Bryce got in early on the action, as it were.

At one time this was Portland's Oldest House, according to the undated article below: 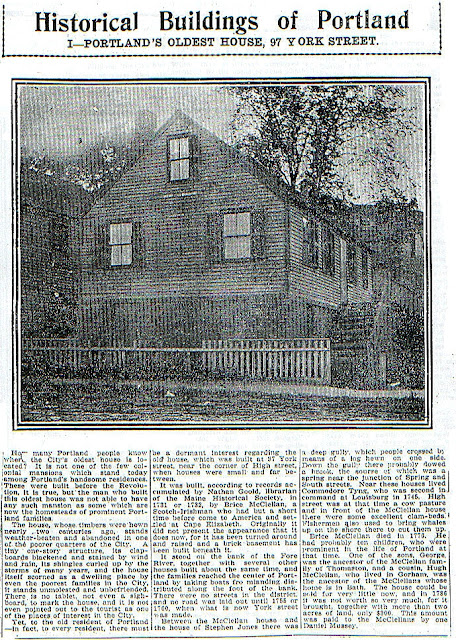 Per the article below, Bryce owned a lot of land along the waterfront, at the foot of High Street, and in 1740 the area was known as "Mack's Landing" (Bryce's nickname):
See map of 1775, just after the Mowatt Fire, depicting Bryce's location near the brickyard, which was later named York Street. 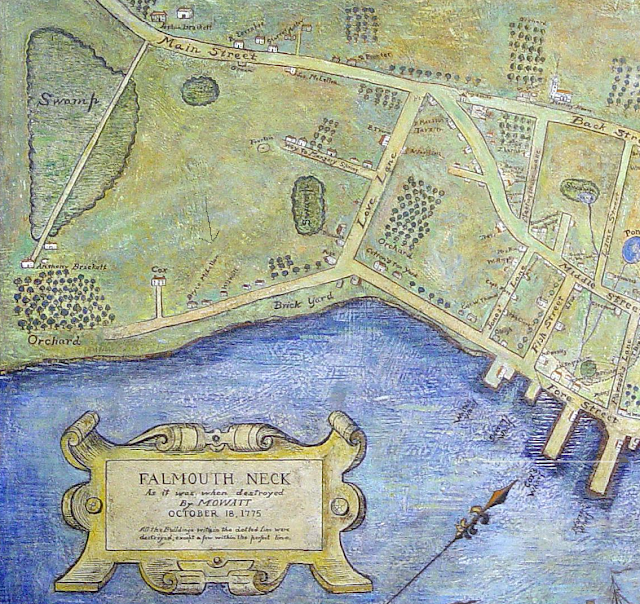 The building was razed in the 1930s or 1940s (according to researcher John McLellan of New Orleans) for a gasoline station.

Today, 97 York Street looks quite different.  It's now a parking lot and a taqueria!


As many Portlanders can attest, many historic buildings were torn down in the 1960's and 70's due to 'Urban Renewal'...literally paving the way for new development.  The demolition of the then phased out Union Station in favor of a strip mall in 1961 created such a furor (still talked about today) that the City started the task of historic landmark preservation.  But such movements were too late for a lot of old buildings, like 97 York.

Bryce's grandson, Major Hugh McLellan (1758-1823, and likely named after his famous elder cousin) was an important figure in Portland shipping, and was owner of Maine's largest shipping fleet and founder of the first bank and first insurance company in Maine.  "Major Hugh" had fought in the Revolutionary War for two months in 1779.  He had a house built for himself in 1800, on the corner of Fore and High Streets.  This building is still standing, and is now an historic landmark building, and a branch of Portland Museum of Art.


Hugh's younger brother Stephen owned the land across High Street and built his own colonial mansion in 1802 (116 High Street, now housing the Cumberland Club),  Stephen was a Freemason starting in 1779, and a veteran of the Revolutionary War (for four months in 1780).

Hugh left his house to the bank around 1807, due to his shipping business falling apart (thanks to Jefferson's Embargo Act of 1807) and his resulting nonpayment of taxes. 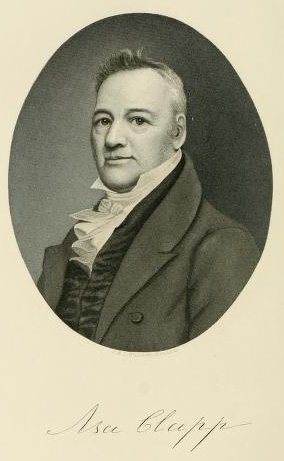 The Honorable Asa Clapp (wealthy next door neighbor to Hugh, who had married into the famed American Quincy family) bought it from the bank in 1817, and it changed hands a few more times throughout the years, landing in the Sweat family's hands until the death of Jane Sweat in 1908, when it then became property of the Portland Society of Art.

Stephen sold his mansion in 1810 for $2000.00, and stayed on hand to work there as Manager in its new capacity as a boarding house.

Bryce and Jane had six children together who survived to adulthood.  The others died young while they were living in Wells, Maine.  When Jane died, he married Elizabeth Miller in 1741.

A painting of the very friendly looking William can be seen here:


William was a powerful shipping magnate, and was one of the few slave owners in Maine during his time.  He also fought in the Revolution.  According to the Sons of the American Revolution, William was one of the Committee of Correspondence and inspection at Falmouth in 1775 and captain of the transport sloop "Centurian" that carried Captain Peter Warren's Co. to the Penobscot river in the Bagaduce Expedition in 1779.  William's grandson, Captain Jacob McLellan, was mayor of Portland from 1863-1865 and again in 1868.  The McLellan School on Neal Street, named after Jacob, on Neal Street is now condominiums:


As for Bryce's three daughters:


More can be read about the austere McLellan Clan of Portland here.

Charles's maternal grandfather was John Jameson, whose paternal great grandfather William was Scotch-Irish, arriving in Boston Harbor on 4 August 1718. William was a founding father of Falmouth, Cape Elizabeth, and Rockland, Maine. He and his sons fought in the Revolutionary War, from the down east coastal region of Maine. Prior to that, while in Cumberland County, they fought against Indians.

William’s grandson, our ancestor Robert Jameson, left behind 137 descendants when he died at age 86. One of them was his granddaughter, Mary Ann Jameson, Charles Murch’s mother. Many of the Jameson family lived by the ocean in Rockland, in an area now known as “Jameson Point”.


There is a book called "The Jamesons in Maine, 1647-1900", published around 1900, that traces all their history, and even gets as current as Charles Murch's father, James.

William's son Alexander, who married Mary McLellan (mentioned above), was one of the founding members of Friendship Maine (formerly Meduncook Plantation), along with his brothers, and lived on Emery Davis Farm.

The Jamesons of Maine, another Scotch-Irish Maine migrant family, have been documented in this blog here.
Posted by Scott Leonard at 7:07 PM