The surname Clark comes from the Old English "Clerke" which was, quite simply, a clerk.  It began use as a surname back when surnames began use for various trades and localities held by particular English nobles.  The usage began with Clerke, and at certain times throughout history, later was shortened to Clark for a variety of reasons, one being migration to the New World.  Our immigrant ancestor, for instance, Thomas Clarke, died as Thomas Clark in Plymouth Colony.

In the vast majority of cases, our name Clark has remained without the "e", as it has existed in New England, to this very day.

However, my Grampy Herbert Clarke and his brother James Clarke were the only two in their own immediate family to spell their names with the "e" at the end. Likewise, their many descendants also carry that name.

Their other siblings...Geraldine, Emma, Ethel, Claude, Niles, Clifford, and Leonard, all kept the Clark name intact...as did the vast majority of their Connecticut cousins...with a few exceptions.

Well, the one thing that Herbert and James had in common besides blood was that they both were sent to Opportunity Farm, a work farm for boys in New Gloucester, Maine, back when it opened in the 1910's: 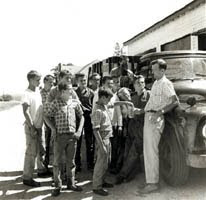 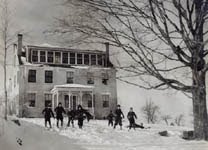 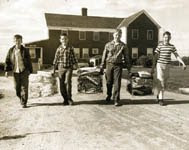 It's easy to see that the Farm changed their names to Clarke.

Granted, many of my elder ancestors also used the "e" on their names. In fact, I've seen the e used in a variety of docs going back only 5 generations. However, it's distinctly been missing from the past 4 generations, save for the two boys that lived at the Farm.

The Farm is still in business, includes girls, and is a home for underprivileged kids and teenagers. It enjoys a good reputation and a 100 year history now...but I heard some horrible stories about what went down at the Farm when my grandfather lived there. One very horrific story involved forced circumcision with no anesthesia.  I'm certain that during that era (1910s) such abuse was deemed good for the boys, and likely occurred in similar work farms throughout America.

My mom and I paid a visit to the Farm in the Summer of 2010, and were saddened to learn that most records up through the 1920's were no longer kept.  We couldn't even find any rosters with kids' names on them from my grandfather's time there.  There were a handful of pictures (like the ones above), and a lot of material from the 70's onward, though.  It was nice to learn the history of the Farm, and to share stories with the current administrator.
Posted by Scott Leonard at 6:33 PM