The Leonards of Portrane Ireland

Leonard is an English surname, which was used to Anglicize Germanic, Scottish and Irish surnames between the 1500s and 1700s.

In Ireland, the name Leonard was used for a variety of Irish surnames, like Glennon, Lennon, and Lennan, which in many instances originally came from the Gaelic name O Leannain (derived from the word leann, which denotes a cloak).

My Leonard ancestors began inhabiting the Burrow Townland of Portrane Civil Parish (Port Reachrainn) at some point between 1760 and 1804, based on historical maps.

Portrane is a portion of the larger Donabate Catholic Parish, located in the Balrothery Poor Law Union of North County Dublin (and North Dublin has been known as Fingal since 1994, for administrative purposes).  Portrane did not suffer as much as most of Ireland did during the Famine, due to proactive farming practices.  Nobody died of hunger there, and their literacy rate during the Famine was at about 50%, which was higher than average.  Neighboring Ballisk Townland, for a comparison, had a 12% literacy rate during that same period.

Portrane was owned by the Archbishop of Dublin up until the late 18th Century, whereupon it was purchased (seized) by Irish landowners (the Evans Family).  Captain Hampden Evans and his sons, George and Joshua, were the area's landlords (and influential politicians) up until the early 20th Century, and were known as benevolent landlords to the tenant farmers.

During this time, the Evans Family inhabited a glorious estate known as Portrane House, located in southern Portrane (Portrane Demesne), and reportedly took relatively good care of the many tenants in the Parish, including the Leonards.  After the turn of the century, due to a variety of land acts benefiting the post-Famine tenants, the Leonards, along with their neighbors, each were able to purchase their individual lands from the Evans family, with some help from the federal government.

In 1903, the Evans family had died off, or moved away, and their massive land holdings in Portrane Demesne were acquired by the Health Service Executive (HSE) in order to install a satellite facility to handle the overflow of patients being admitted to Richmond Asylum at Grangegorman in Dublin City.  This new facility was called Portrane Asylum (now known as St. Ita's).  The Asylum has long been one of the main employers of Portrane, and is the workplace of many of the Leonards and their neighbors.  While St. Ita's stopped admitting inmates.


The eldest Leonard ancestors I've traced to date are Thomas Leonard and his wife (maiden name Byrne).  Thomas was born in 1773, but it's unknown at present if he was born in the Burrow, or if he had moved there as an adult.  Given maps of 1760 showing no houses drawn on them, when houses were drawn in other parts of Portrane on the same map, it is understood that the Burrow was uninhabited in 1760 (and was then known as The Warren, due to the large number of rabbits living there).  Myxomatosis killed off the Burrow rabbits in the 1960's, however hares have made something of a return in recent time.

Per the above map, certainly by 1804, the Leonard Homestead (aka Portrane Cottages), had been established and was being leased to Thomas' elder brother, Charles Leonard, along with a farm lot across the road (these lots were called Burrow Gardens).  While the Burrow was certainly hit by the potato Blight, it apparently wasn't as bad as it could have been.  Nobody in the Burrow died of hunger.

When Charles died (at some point before 1847), his nephew Patrick took over the leases (not sure why Patrick's father Thomas wasn't viewed as equipped for this).  In April of 1865, Thomas died of old age (92 years) at the Cottages, and in August of that year, his son Patrick died at the Balrothery Workhouse.  Patrick's eldest son, Mathew (my 3rd great grandfather) took over the lease and farm lot from his father, until his own death in 1904, whereupon the lease passed to Mathew's son Francis.  By the time of Francis' death in 1945, the Leonard family finally owned the Portrane Cottages, and are still owned by them to this day, marking a 7th generation of Leonard ownership, as of 2019. 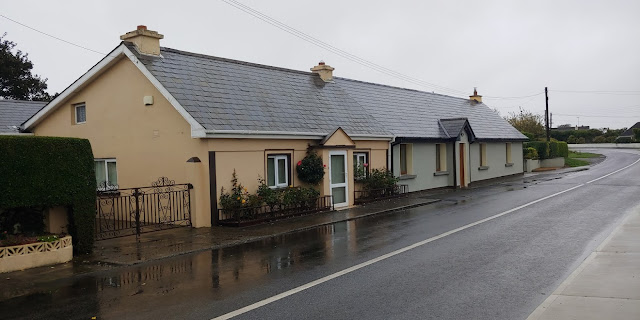 Many of the Leonards and their neighbors of the Burrow are buried at Old Donabate Cemetery, and many of these burials are without memorial, as can be seen in this night time shot from 2019 (note the old Donabate Parish church (1803-1903) is next to the graveyard, and the new larger church (built 1903), looms in the background, across the street. 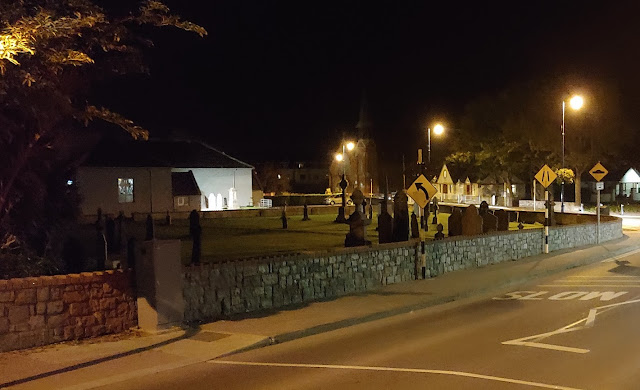 The view of this graveyard is taken from Smyth's Bridge House, a structure which has been here since 1842, and has long been the local watering hole of the Leonard kin. 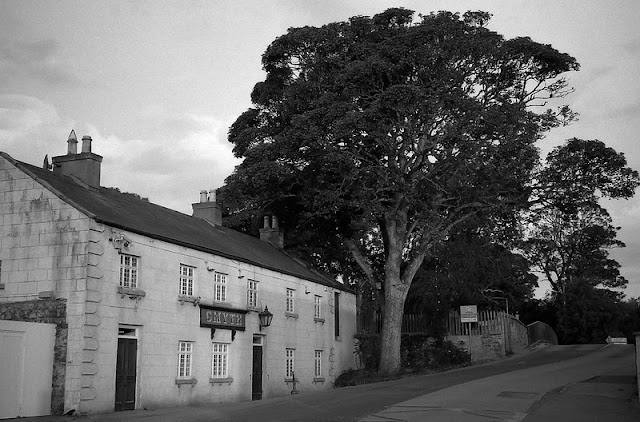 Posted by Scott Leonard at 1:13 AM