Patrick Mullarney (1844-1906) was brother to my 3rd great grandmother, Sarah Mullarney-Howlett.  He was born in Ballymanus, County Wicklow to Thomas Mullarney and Elizabeth Ellis, on land rented from Daniel Tighe, a prominent local landlord.

Patrick had ambitions to become a national schoolteacher, and I believe that he idolized and was mentored by Thomas Howlett, who ended up marrying his sister Sarah.

In 1863, Patrick worked at Rathnew National School in Wicklow, not too far up the road from Ballymanus.

In 1867, Patrick started working in County Dublin (where the money and opportunity may have been better) at Lucan National School as well as Raheny School.

In 1873, he married dressmaker Ellen Flyght at St. Patrick's Parish in Wicklow, and they ended up having seven daughters together.

By 1874, Patrick had officially left Wicklow, to begin work as a national schoolteacher in Glencullen, Dublin.  By 1881, he ended up being promoted to schoolmaster, a position he kept until at least 1894.

In 1882, Patrick was charged by the Rathdown Union with failure to vaccinate his children.  It's unclear which vaccine was available at this time.  There weren't many, only the ones for cholera and smallpox, to my understanding.
In 1884, a dog bit one of his daughters, and Patrick pressed charges against Dr. Mackay for failing to treat her.

In 1892, a few months after his mother Elizabeth died, Patrick accused John Cullen of Glencullen of kicking his dog, causing a broken leg and shoulder, but the case was dismissed.  In 1895, he was arrested for public drunkenness, and in 1897, he lost his two youngest daughters to diphtheria (they were only ten and twelve years old).  To add insult to injury, his house was inspected by the local doctor (Mackay), and he was ordered to clean up and sanitize the room, to prevent the spread of the disease.

Late in 1905, Patrick contracted tuberculosis.  He checked into the Rathdown Union Workhouse for treatment for his sore eye in December of that year, a complication of his TB.  He was released a month later, in January of 1906.  He was dead by March of 1906.

His wife Ellen remained at their house until her own death in 1932.

Of his seven daughters, only four appear to have lived to adulthood, but I don't believe any of them had any children of their own.  His eldest daughter Elizabeth ended up in Mountjoy Prison for a week in the summer of 1915 for stealing a box of polish.  She married a few years later, and I think she was the only child of Patrick's to do so.

This is a post about my third great grandfather, Thomas Howlett (1828-1878).  Thomas was a National School Teacher in Wicklow and Dublin counties.

A National School was, and still is, a secular elementary school, or public primary school, fully financed by the government.  It was set up in the 1830s to accommodate the need for a non-religious schooling, an alternative to parochial schools administered by the Roman Catholic Church or the protestant Church of Ireland.

Thomas appears in the salary books ("pay books"), which I was able to locate at the National Archives in Dublin, October of 2019.  I learned that from 1860-1862, Thomas was employed at Glenealy National School in Wicklow.

Patrick Mullarney, Thomas' brother-in-law, was also a National School Teacher in Wicklow and Dublin during the same time as Thomas.  I suspect that this might be how Thomas met his wife Sarah, Patrick's older sister, in Wicklow.

From a variety of records, it's clear that his parents were Jacobi (aka James) and Elizabeth Howlett of Wexford.  The one baptismal record that seems to match is from Ballyculane, Wexford, dated 1840, with parents Jacobi Howlett and Margarita Commins.  However, his marriage and death records declare him to have been born in 1828.

It's interesting that Thomas and Sarah were married in January 1863, at St. Mary's Pro in Dublin City, and that they baptized their daughter there in August of the same year.  It's quite possible that this was a shotgun wedding, with Sarah being two months pregnant at her wedding, and also being 11 years younger than her groom.  This might have invited a variety of scandals.

Sadly, though, in 1865, about a year and a half after the birth of their daughter Lizzie, young Sarah died of tuberculosis, back at her home in Ballymanus.  Her death record states she had the disease for ten months before dying.  That must mean that she contracted it when her daughter was exactly one year old.  At the time of her death, she was under the care of her brother Patrick, who was the informant on her death record (and not Thomas).  It isn't very clear to me that Thomas and Sarah had any kind of strong relationship.  They likely met through the School connection, had an evening of intimacy and were forced to be married because of it, probably only knowing each other 2 or 3 years total.  Given that Sarah was highly contagious, it's also quite possible that she left Dublin City to go back home to Ballymanus, leaving her daughter and husband behind, so she wouldn't infect them.


After Sarah's death, Thomas worked briefly at St. Peter's National School in Dublin in 1867, but soon afterward was working as a school teacher at Kinsealy School, and there he met a farmer's daughter by the name of Bridget Campbell.  They were married at Baldoyle Chapel in 1870.

Thomas had been promoted to schoolmaster at Kinsealy by 1877.  He died of accidental drowning in Artaine, North County Dublin, on 2 Jan 1878.

In 1889, his daughter Sarah had sailed to New England, and in the same year married my 2nd great grandfather, Mathew John Leonard of Portland Maine (originally of Dublin).  I wonder if they knew each other in Ireland.  Her father had spent many years working in Kinsealy, about five miles south of Portrane, where Mathew John grew up...

My 4th great grandfather was Thomas Mullarney of Ballymanus Upper Townland, in the Glenealy Parish of County Wicklow.  He was born around 1808 and died around 1877.

In 1835, in Old St. Michael's of Rathdrum (church is no longer there), he was married to Elizabeth Ellis, and they were both living in Garrymore, Ballinacor, Wicklow at the time.

It's unclear when they moved to Ballymanus, and became caretakers of one of Daniel Tighe's properties there, but it was certainly between 1835 and 1841.

I learned of this ancestor upon a trip to Ireland in October 2019, by procuring the death record of known ancestor Sarah Mullarney-Howlett, who was mother to my 2nd great grandmother, Lizzie Howlett-Leonard.  On Sarah's death certificate, it stated she died in Ballymanus Townland, and was wife of schoolteacher (Thomas Howlett).  This was a revelation to me, as all my Irish ancestral research had, up to that point, been confined to North County Dublin.

Once I studied a bit more about Sarah, I learned that her parents were Thomas Mullarney and Elizabeth Ellis, also of Wicklow.  The 1852 Griffith's Valuation matched up the name Thomas Mullarney, at House Lot 3 of Ballymanus Upper: 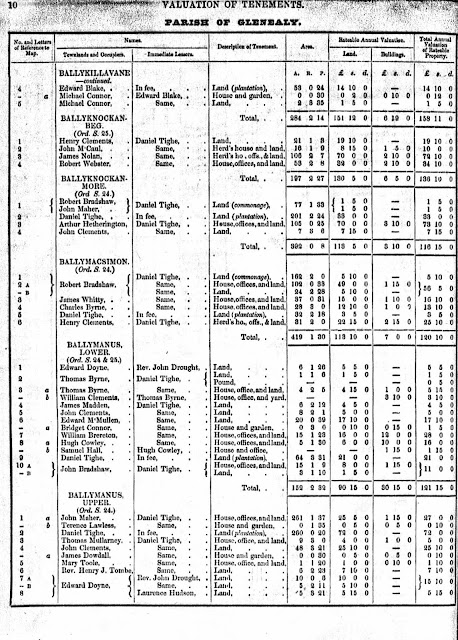 I paid a visit to the Valuation Office in Dublin, and managed to get a nice copy of the Valuation Map for Glenealy Parish, which was used for the above valuation document:

I was also able to look through the old cancellation books, to run the full chain of title from 1842-1978.  The landlord for the Mullarney House was Daniel Tighe, who was also a neighboring landowner/tenant (as you can see from the above roster).  The Mullarney lot was measured at 9 acres, 3 roods, and 0 perches (about the size of ten football fields).  The 9 acre land was long valued at 5 pounds sterling (inclusive of house).  The house situated on it was always known as the "Woodranger's House" in these cancellation books.  I would be very curious to learn which house this is, and if it's still there.  As of 1978, the house lot had been subdivided onto a smaller land, and was then owned by a Bernard Kelly.
In researching the other small number of Mullarneys living in Glenealy Parish during this time, I've come to believe that Thomas had brother named James (1823), and a daughter or niece named Eliza (1845).  Eliza had her own child in the Rathdrum Workhouse, named William in 1868 - no father listed, and Mullarney was listed as Eliza's maiden name.

Thomas was listed as caretaker of this particular property of Tighe's, and he appears in many petty court sessions in Ballymanus/Glenealy, where he complained of trespassers and thieves:
Whom I believe to be Thomas' brother or father, James Mullarney of Ballymanus, had a few run-ins with the law:
William Mullarney, mentioned above, who had spent a week in jail for assault, and who might be little brother or nephew to Thomas, also had a record:
By 1877, Daniel Tighe's son, James, acquired title to the land, and most all other land in the Parish,  and at that point, Thomas Mullarney drifts off of title.  He had clearly lost the lease by then.  What is not so clear is what happened to him after that, or when he died.

Thomas Mullarney and his wife Elizabeth had five known children:


Given that his wife Elizabeth died in 1892, a widow, at aged 82, it seems reasonable to believe that Thomas Mullarney was born around 1808 (Wicklow parish baptismal records from that period are hard to find online), and could have died around 1877, some point after he lost the lease to the Tighe family.

Thomas was born about ten years after the execution of Billy Byrne of Ballymanus, who put this townland into history.  I wonder if his parents knew Billy (or were somehow related to him)?

Patrick and his family lived in Glencullen, Rathdown, South County Dublin (just a bit north of Wicklow), so perhaps Thomas died in that area too.