John Ozias Clark (1847-1926) was a man of controversy in the Clark family.  He is the patriarch  to one of the largest Clark legacies in Connecticut, having fathered at least 15 children, many of whom told stories of sadness over how they were treated, many others of whom defended him and his actions.

John was born the summer of 1847, the third of twelve children born to Leonard & Esther Clark of East Haddam. He fought in the 20th Connecticut Regiment in the Civil War alongside his father, and married Alice Emerline Rose shortly afterwards.  John and Alice had 6 children:

1. SARAH ADELE CLARK (1869-1941).  Sarah was a spinster who lived in New Haven, and is buried at Race Hill Cemetery in North Madison, CT, alongside her mother. 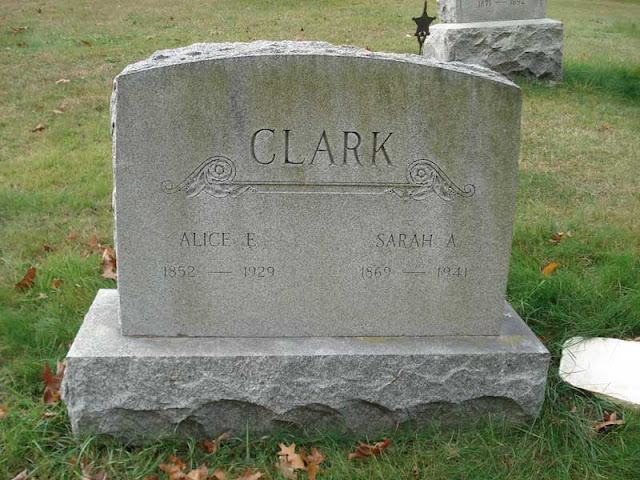 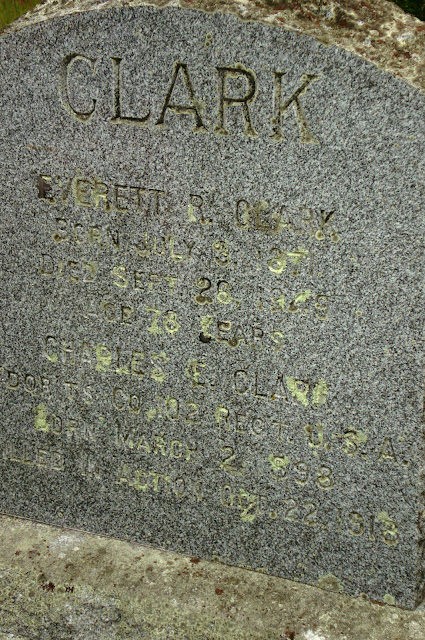 2. EVERETT ROSE CLARK (1871-1949) married his second cousin, Besse Agnes Clark (who was a descendant of James A. Clark).  They had seven children, two of whom perished as babies in 1900 (having contracted disease brought on by exposure to John Ozias' sick daughter Esther, who also died in 1900, at a time when John was trying to make amends to Everett).  Everett did not get along with Besse after she had left him around 1918 and had run off with a young carpenter named George Gleason.  Everett had to raise the five surviving children by himself.  According to Everett's son Maurice, the State child welfare people came to the house to take the children away and Everett threw one of the men off the second floor of the house.  Maurice said they never came back again.  Everett considered her dead when she left. That's why he put "widower" on the 1920 Census. By the 1930 Census, he was living alone, and put himself down as Divorced.  Some of Everett's grandchildren and their descendants live in Connecticut today.


George W. Clark, A lad nearly nine years of age, was drowned in the pond of Boise Mill last Sunday afternoon while bathing with other boys. The body was soon recovered and every means used by our village physician, Dr. Knowlton, to resuscitate, but without avail. The mother of the boy, with quite a family of small children, recently came to this village from the town farm and is in destitute circumstances. The whereabouts of the father of the children is unknown. 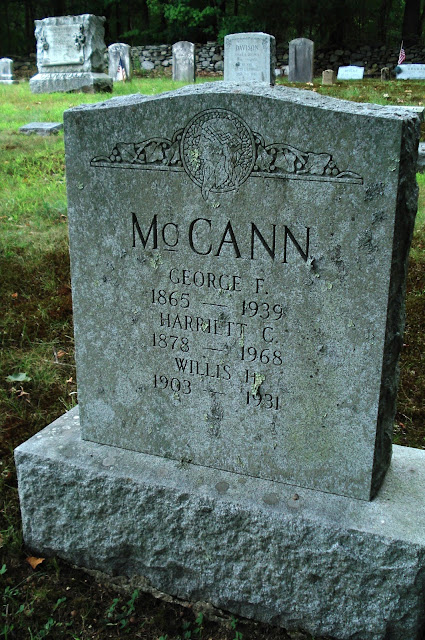 5. HARRIET ESTHER CLARK (1878-1968).  Harriet married George McCann and remained in East Haddam.  She had five children.  One of her sons, Horace, moved to Naugatuck, CT, and had ten children of his own.

6. FRANKLIN EUGENE CLARK (1880-1958).  Frank (pictured above with his brother Everett) had a horrific accident while playing with large firecrackers as a 14 year old boy, leaving him without a right arm.  When the injury occurred, he walked by himself about 15 miles to the hospital for treatment.  Frank worked for the town of Essex, CT, for a while.  He would handle a shovel and street broom as good as anyone else.  He also handled a team of oxen...all with a hook for a right hand!  He and his wife Kathy had two daughters.

Judging from the article regarding George's drowning in the summer of 1882, John Ozias had likely neglected his children quite soon after fathering the last of them with Alice.  It has been said by a descendant of Everett's that John had left his children behind to work in the Neptune Twine and Cord Mill Factory, and living at the nasty tenements known as Johnsonville.  John's father, Leonard Sherman came and got them from the work farm, and raised the boys himself for a time, and also had the girls raised by cousins in Madison and Guilford.

Alice applied to the East Haddam Alms House, and was accepted into it in Aug. of 1881...when Franklin Eugene Clark was just a year old. John O. left her prior to that, obviously. Alice was in and out of the poor house three times between 1881 and 1888. When she checked in during 1888, she stayed there until Oct. 4, 1917, when she was then transferred to the CT Hospital for the Insane (now CT Valley Hospital) in Middletown. 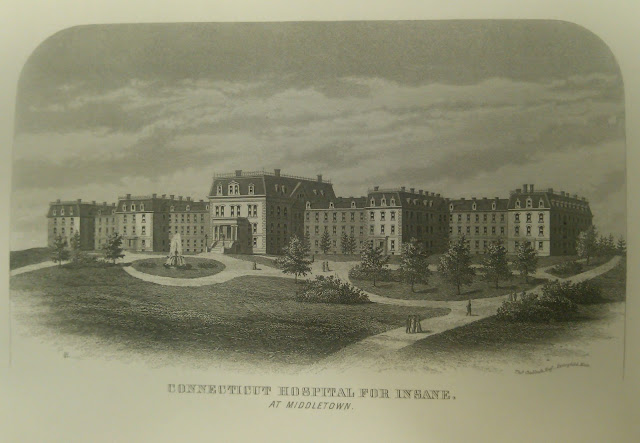 Now, the degradation of her mental faculties must have happened while at the Alms House, because the town historian says that being 'insane' would have actually kept you from being ADMITTED to the Alms House in the first place. Alice and John officially divorced in 1900.

Some sources state that John had claimed Alice to have been unfaithful, and that this was grounds for his desertion and divorce.  Still other sources state that Alice kept her children away from John (hard to believe, given her status as a ward of the State).  Either way, Alice remained in State custody for the rest of her life, dying in 1929 at CT Valley Hospital.  Many of her descendants were surprised to read the obituary, given that they had believed she disappeared and had abandoned them, and had no idea that she was in State custody.

Five days after divorcing his first wife, John married Antonette Rose (potentially a cousin to Alice, according to one source, and was daughter to Laura Ann Bogue, mentioned in other blog posts), and had an additional 9 children. 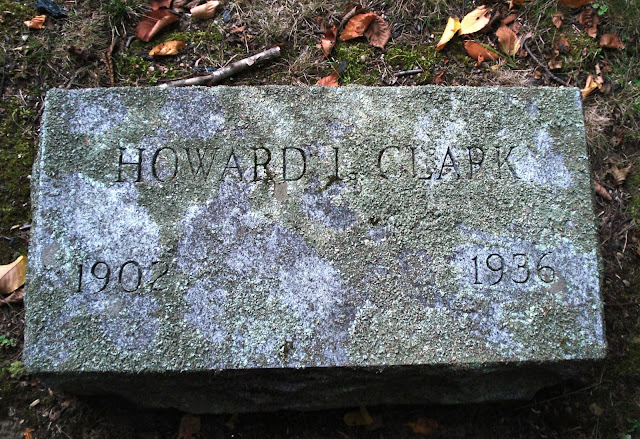 
Driver Killed As Car Is Overturned...

Middlefield, Feb 3. - Death rode the highways of Middlesex County over the week-end and claimed as its victim Howard E. Clark, aged 31 years, of Hadlyme, who was crushed beneath a roadster he was operating which had crashed into the rear of a parked pleasure car near the Mira Meechi section on the Middletown-Meriden highway. Two passengers in the machine with Clark crawled from beneath the wreckage, both slightly injured. Clark died instantly. His head was crushed and he suffered other hurts. Coroner Lownds A. Smith conducted a preliminary investigation and today set down his inquest tentatively for Friday morning in Middletown.

Clark according to state policeman Richard C. Hall of Westbrook barracks, had spent Saturday night in Waterbury and was returning home. While driving through Meriden he stopped to pick up Salvatore LaBella, of 650 High Street and Leo Solito, of 31 North Main Street, both of Middletown, who had been in the silver city attending a social function. They did not know him.

Clark's passengers told the state policeman afterwards that they were sorry that they accepted the lift and were frightened throughout the journey to the accident scene, because of Clark's erratic driving. They said he steered a zig-zag route and that steam from the radiator froze, obscuring the passengers vision.

Almost without warning the car crashed into a rear fender on a parked Chevrolet sedan, then continued 15 feet overturned with its occupants and swinging completely around to face west. Solito and LaBella got out unaided but Clark's body was not extricated for some time. When police and others attempted to lift the roadster, it fell apart. It was a complete wreck. Clark was identified by two motor vehicle licenses found on his person.

John J. Kenesky, who gave an address of box 254, Middletown, informed police at the crash he was seated behind the wheel of the sedan, which was owned by George Koba of Middlefield. Kenesky, Koba, Loretta Jarzabek and Antoinette Bankoski comprised the group in this car which was stopped on its own side of the highway at the time and the lights left on to let one of the young ladies out as her home was nearby. They had been in Meriden.

Kenesky said they all heard the Clark car coming and after the crash saw the wrecked roadster continue along for several feet and topple over. They summoned Anthony Bankoski and his young lady friend, who were in another parked car in a nearby yard.

The accident occurred at 12:30 A.M., on Saturday and brought a response from Middletown police headquarters. Officers Lundberg and Novak being detailed and later state policeman Hall arrived as the territory was out of the jurisdiction of Middletown police. Patrolman Lundberg and Novak assisted state trooper Hall in his investigation. No action was taken against Kenesky.

Funeral services will be held at the Jewett Funeral Home in Old Lyme Wednesday at 2 P.M., Rev. Rawson Holgate will officiate. Burial will be in the Chester Cemetery, East Haddam. 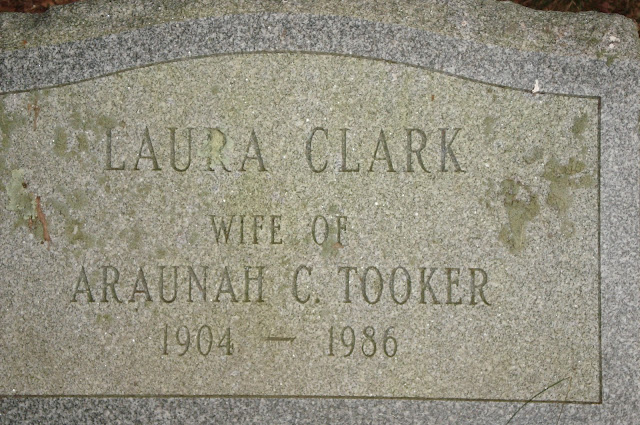 10. LAURA MAE CLARK (1904-1986).  Laura married Araunah Charles Tooker (nephew to Lizzie Tooker, who married John Ozias' younger brother Niles) and was a lifelong resident of Hadlyme.  They had only one child, Freda Electa Tooker, who died as an infant. 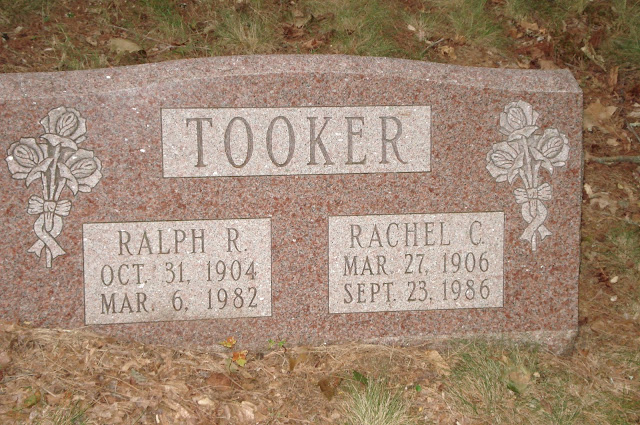 11. RACHEL ESME CLARK (1906-1986).  Rachel married Ralph Ramon Tooker (brother to Araunah) and lived in Norwich.  She worked as a housekeeper for private homes in Lyme.  They had two children (Nathaniel, who died as a teenager, and Laura, who had three children). 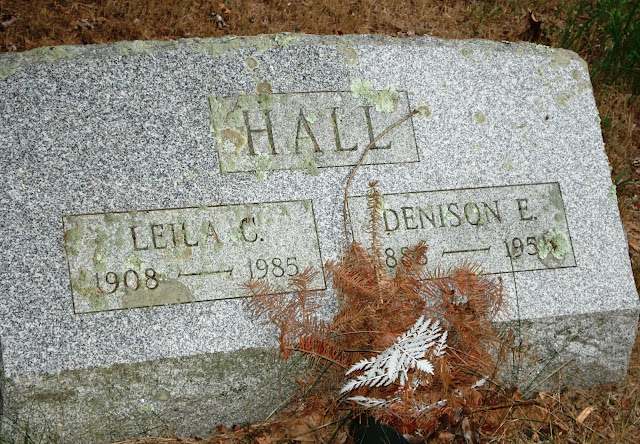 15. SUSAN ELECTA CLARK (1915-1965).  Susan is pictured above with her father.  She married twice, to a Robert Dube and to a Raymond Rushlow.  She had one daughter, Virginia.  Susan died on her 50th birthday.

There was mention made of John having had yet another two families in Vermont.

John Ozias worked as a farm laborer, carpenter, and mason-tender.  He lived for a time in Westboro, MA, Alburgh and St. Albans, VT, and Norwich, Bozrah, and Guilford CT, but he lived his final years in East Haddam. When he died of paralytic shock, two of his children from his first marriage refused to attend the funeral, stating that their father was an evil man for abandoning them in favor of his second family, and for committing Alice.

The family of one of his daughters held on to the land that John owned on Clark Road in Hadlyme, CT, although the house is no longer there. John was 5'9", blue eyes, auburn hair.

Posted by Scott Leonard at 5:53 PM No comments: