James Clark was born 1795 in East Haddam, Connecticut, to Sterling Clark and Sarah Warner.  Like his father and grandfather before him, James was a blacksmith.  He was a member of the 37th Connecticut Regiment in the War of 1812, but he was enlisted in October of 1814, and stationed at Fort Trumbull, he never saw any battle action and was discharged in May of 1815.  According to his enlistment record, he was 19 upon enlistment, had red hair, grey eyes, and sandy complexion, and was 5'4".

Nonetheless, in 1818, President James Monroe gave "James Clarke" a bounty land grant for a 160 acre property near Quincy, in Western Illinois (just across the border from Missouri).  He and his wife Anne sold it off to Eli Lord of New York in 1821 (who held it until 1837, and Eli was living in NY when he then sold it off to Jonathan Price).

Now, when James sold his patented land to Eli Lord, James was living in East Haddam, CT.  It's unclear whether he ever went to Illinois to live at (or even see) the property.  The family appears on the 1820 Census of East Haddam, so I think it's unlikely that they ever did go out there.

According to family legend, though, James and Anne had gone to live at the property in "Quincy", and left the kids behind in East Haddam with their neighbors, the Howells.  If this is at all true, then they had to have returned within a 3 year period to be all together again for the 1820 Census.

Below is an 1870 Map, showing the then current owners of the property, superimposed over an aerial map of the land.  It's the land labeled "D. Wible" below.

Also below is a 2014 Google Earth image of the same property outlined in black. It's located in Ursa Township, Adams County, Illinois, part of the Quincy Metro Area, but pretty far north of the City.

Note that President Madison spelled James name Clarke with an "e".  James' sale deed shows his name as James Clark, with no "e".

I don't know when James or Anne died. But their children, James, Delia, and Leonard stayed in East Haddam, CT the remainder of their lives.
One of the readers of this blog has suggested in 2020 that James may have come back to Illinois.  A James S. Clarke of Haddam was an early settler of Fremont Township, north of Chicago (300 miles north east of Quincy), per the below excerpt from 1850: 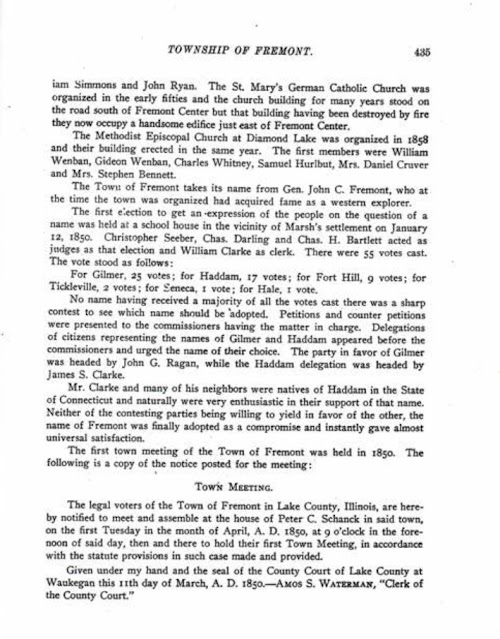 This will require further research, but I'm grateful for the suggestion here.  It may be that James came back to Illinois, and the middle initial of "S" here would align with his father having been named Sterling.
The 1850 Census of Fremont, Illinois does show a James S. Clark, who had been born in CT in 1800, and was a farmer.  This is very likely the same as the above transcript, but is it the same as the James of this blog post?  Well, in this census, James is married to a Sophia (not Ann), and this Sophia Converse was born in VT.  Also, any James Clarke born in 1800 would not have been enlisted into the War of 1812, so unless the Census was off by a few years (possibly true), this wouldn't likely be the same James.
Probate records lead me to a James S. Clarke of Fremont who died in 1866, and had a large farm which was the subject of a massive public sale process.  The only heir mentioned here was one child named Converse Clark (15 years old at the time), which doesn't match any of the known children of my James from CT...some of whom were indeed alive in 1866.  Interestingly, the probate was opened up by a man named Hurlburt Swan, and I do see his name mentioned in several Haddam CT records, including his marriage to a Nancy Clark, and an adoption of another Nancy Clark.  In some of these records, mention is indeed made of letters sent to Fremont, Illinois. 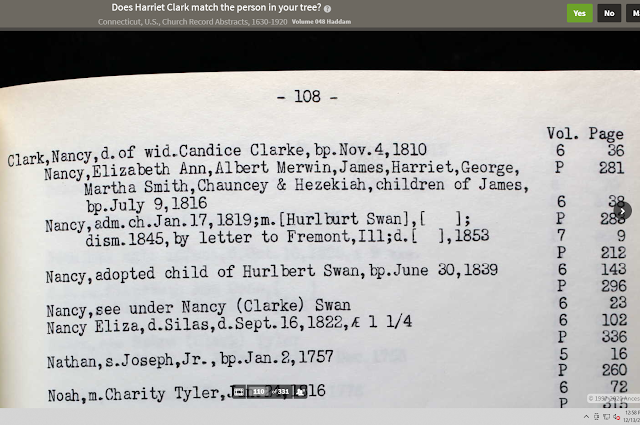 Note above, that a Nancy Clark was one of nine children of a James Clark of Haddam, all baptized together in 1816.  This James was born in 1774, and stayed in Haddam all his life.
Our James was born around 1794, very much from East Haddam which had separated from Haddam in 1734.
It's an interesting coincidence, that a James Clark of Haddam clearly moved to Illinois and helped found the town of Fremont, becoming a very successful farmer, but I doubt that this is the same James Clark of my research, who was a blacksmith from East Haddam, and five years older than James of Haddam.
Posted by Scott Leonard at 7:28 PM