The Hollands of Central Maine

My 4th great grandparents were Daniel Friedrich Holland (born about 1790), a Prussian sailor, and his wife Jane Bell (1789-1873) from Nova Scotia.  According to some researchers, his birth name in Prussia was Hollien, and turned to Holland when he emigrated to Nova Scotia.  Daniel married Jane Bell while living in Canso, Nova Scotia, in 1808.

Daniel and Jane migrated to Monmouth Maine around 1809, where they started their family.  They later moved to Jay, Plymouth, Brunswick, Bangor, Hampden, then Dover.

Below is a brief summary of collected information about each of their children:

1.  Daniel Frederick Holland Jr. (1810-1906) was born in Wales, Maine, January of 1810.  I cannot find any record of this small family of three living in Maine for the census later that year.  Daniel married Mary A. Finson and had six daughters.  He lived most of his life in Hampden Maine, and worked as a farmer and a cooper.  It's also possible that he worked as a seaman like his father (given the mention of two seaman in the family during the 1840 census of Jay).  As for his family: of his 5 surviving children, 4 of them lived with him for each census until his death at the turn of the century.  None of them ever got married.   Just before their parents' deaths they all moved together to Brookline, Massachusetts, on Davis Avenue.  Daniel died of a cerebral hemorrhage at his home on 8 Parkdrive Terrace, Brookline in 1906, and was buried at Riverview Cemetery in Hampden (gravestone below).  On his death record, he states his mother was born in Scotland...


2. Marie Wurttemberg Holland (1812-??) was born in Jay, and her middle name provides evidence of the connection to the Duchy of Wurttemberg, Germany, home of Daniel's mother, and possibly Jane's mother too. I cannot find any records at all on her. The above was oral history provided by a Holland researcher.

3.  John Christopher Holland (1814-1899) was born in Jay and raised in Hampden, and was my 3rd great grandfather.  He was listed as head of household for the 1840 census of Bangor, wherein two members of the family were 'employed in the Navigation of the Ocean', which would be his father, and likely also his brother Daniel.  John married Dorcas Harvey of Atkinson, and had two daughters, Isabel (who died as a baby), and my 2nd great grandmother, Rosa Bell Holland, who married Charles Murch of Rockland and Unity, Maine.  John started out working on the family farm in Hampden, but later worked as a sawmill laborer.  He died in Hampden of heart disease.

4.  Sarah Jane Holland (1816-1883) was born in Jay and raised in Hampden, and married Colonel Oliver Kennard Nason, Civil War patriot from Limington Maine.  They moved to Levant, and later settled in Kenduskeag.  They had six children.

5.  Hannah Holland (1819-??) was born in Jay, raised in Hampden, and married John Griffin in Portland.  They had four children there.  Hannah moved back to Hampden for the 1850 census, and was boarding her brother Moody.  I cannot figure out what happened to her or her four children after that.

7.  Margaret Holland (1820-1907) born in Jay, raised in Hampden.  She married her first cousin, Alexander Bell of Dover.  Alexander's father was Henry Bell (brother to Jane).  They had three children, descendants of which are still living in the Dover area today.

8.  Mary Ann Holland (1825-1895) born in Plymouth, married someone named Gardiner.  She died single in Somerville of scirrhus cancer at her home on 17 Grove Street, and she's buried at Holy Cross Cemetery.  On her death record it states that her mother's birthplace was Jay, Maine...

10.  William Moody Holland (1830-1865) born in Plymouth or Brunswick, grew up in Hampden.  He married Sarah Jackson of Rockland, and had one child, George Henry Holland (1860-1939) (who also became a sailor and later moved to Massachusetts and had six children).  William died at sea near St. George, Maine, of yellow fever during the Civil War, so young George was raised by his grandfather, George Jackson in Belfast, Maine (not sure whatever became of Sarah..).  Moody's death record lists his mother as "Mary Jane"...not just Jane.

11.  George Nelson Holland (1833-1923) born in Brunswick, remained in Hampden all his life. He and his wife Lydia had three daughters:  Mabel, Clara and Nellie.  He worked as a gardner, but also fought very briefly in the Army during the end of the Civil War, as part of the 19th Maine Regiment.  He stayed in Togus Hospital for almost a full year from 1919 to 1920, due to hardening of the arteries at age 86, just a few years before his death.

I cannot find the Holland family in the 1810 censuses of either Monmouth or Jay, so it's likely they lived somewhere else just after Daniel Jr. was born.  I did find Daniel's family in Jay for the 1820 Census (under Daniel Holand) and 1830 Census (under "Daniel Hollin").  The 1840 Census shows the whole family living in Bangor, with John being the head of household, but with two elders living with him who were his parents' ages, and two people were listed as being 'employed in the Navigation of the Ocean'.  That would be Daniel Sr., and also Daniel Jr., I believe.  The two of them may have been out to sea at the time of the census, leaving John the head of household, as the eldest son.  I believe Daniel Sr. died sometime afterward in the Bangor area, but the Bangor archives have nothing on his death from 1800-1892.

During the 1850 Census, Jane was living with Daniel Jr. on the farm in Hampden, next door to her son John and his family, and also next door to her daughter Hannah Holland-Griffin's family, who were taking Jane's three youngest children as lodgers (then ages 17-25).  Hannah's children were all born in Portland, but for some reason she moved back to Hampden with the kids (and without her husband John).
By the 1860 Census, she was head of household at a home in Dover, Maine, along with her daughter, Margaret Holland-Bell and family.

I took a trip to Riverview Cemetery, aka East Hampden Cemetery, in Hampden Maine, and snapped some photos of the gravestones of Daniel Jr., John, and their families: 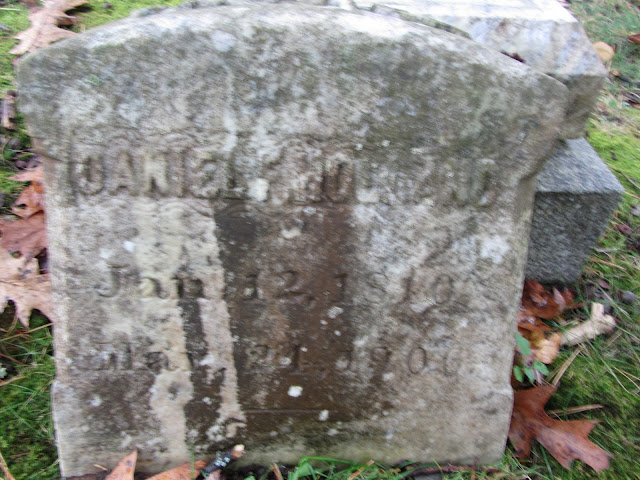 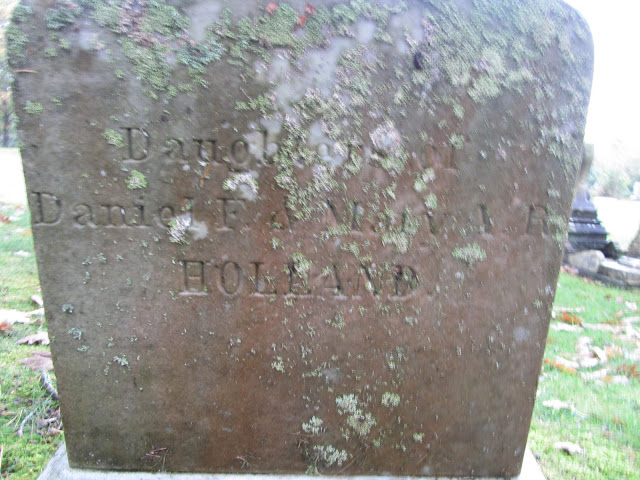 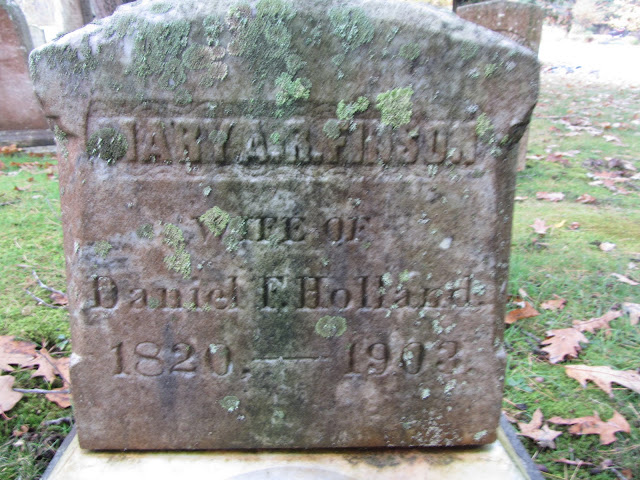 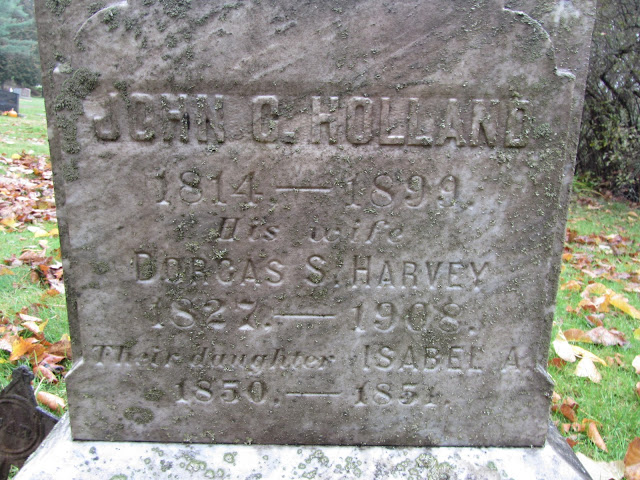 Below is a pedigree chart for Rosa Bell Holland.  She was 50% colonial English, 25% German, and 25% Scottish.

Posted by Scott Leonard at 7:19 PM