Hats Off to Hattie! 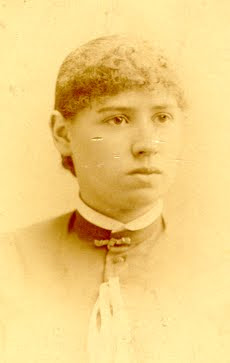 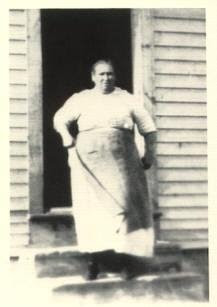 
My mother's maternal grandmother was Harriette Emma Morgan (1866 – 1927), daughter to William Sanford Morgan & Emily Morrill.  She was born on Peaks Island, in Portland Harbor, and was named after her father's sister (Harriett Morgan-Emery) and her father's mother (Harriet Holmes-Morgan, of the Plymouth Holmes who descended from Thomas Rogers of the Mayflower).  She grew up in the City of Portland, except for ages 11-14, when she lived on West Beech Ridge Road, in Scarborough, close to her future 2nd husband, John Henry Temm.

In Portland, May of 1887, Hattie had her first of two marriages, to a teamster named James Downey (an Irishman born in New Brunswick, Canada). They lived on Pearl Street in Portland and had five children.  Alice, Hattie and Lewis died as babies.  Two others survived childhood:

-Anna L. Downey (birth record says "Downing") was born in May of 1889.  In 1912, she married William Arthur Dunn, a Saco machinist, then moved to Portland, Scarborough, and Biddeford, Maine, and at some point between 1920-1930 they moved to Somerville, Massachusetts.  They had one son, Harold Dunn, in 1913.  Anna died in Somerville in 1931, and I believe Harold might be the extra boy included in the 1919 Temm photograph with his grandmother Hattie's family (see photo below).

-Maggie Downey was born in May 1891.  In February of 1908, at age 16, she married an Englishman by the name of Arthur Edward Brailsford, and had two children in Maine, Margaret Brailsford-Reed (1909-1965, who had 13 children in Somerville, Mass, and died on her 56th birthday) and Richard Brailsford (1910-2004), who lived in Quincy, Mass and had one child, Ruth Brailsford-Davis.  They lived in Portland for a few years, and by 1918, Maggie moved to Somerville, Massachusetts to raise the children, where she worked as a laundry marker.  Her sister Anna followed her to Somerville a few years later, with her own family.  Arthur fought in WWI, and on his 1918 draft card, Maggie is mentioned as living in Somerville, but he's living in Portland still, and working as a baker's assistant there at the time of his draft.  Not sure why they were separated.  Maggie's son Richard might also be the extra boy included in the 1919 Temm photograph below, but I'm doubtful of this, since by 1919, little Richard was living in Somerville.  Maggie remarried at some point between 1927 and 1933 to a Clarence Hefler, and moved to Braintree.  Clarence died in 1943, and then Maggie left Braintree, and moved to Quincy to be nearer to her son Richard.  She kept a job there as a clerk at the Bargain Center.  She died in 1968, after a short battle with peritonitis, at Quincy City Hospital.  I've been able to connect online with some cousins from this family.

James Downey died in Portland in 1894 of tuberculosis (just three months after their 2 month old son Lewis died of lung congestion).  He and the three infant deaths were buried in Evergreen Cemetery with no headstones.

Hattie then married her much older neighbor John Henry Temm in 1895 (although I never could locate an official marriage record...), and moved back to Scarborough, and brought her two daughters with her.

Children with John Henry Temm were:

According to my Uncle Sonny Jim, Hattie was one of the nicest ladies you ever met.  If there was a random person walking along Beech Ridge Road, she would holler at them to come on in and have some biscuits and butter.  She was known for feeding many in the Town of Scarborough. 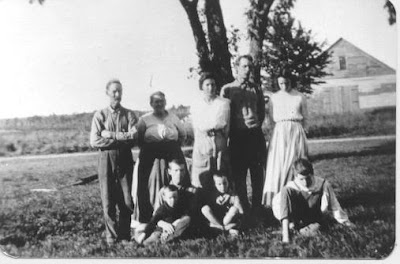 TEMM FAMILY (1919)
Beech Ridge Road, Scarborough, Maine
TOP (L to R): John Henry Temm and his wife Hattie,
their children Adelaide, Clifford, and Emily
BOTTOM (L to R): Edwin, holding Carl
and another boy (possibly one of Hattie's grandsons,
Harold Dunn or Richard Brailsford),
and then William S. Temm on the far right.
(NOTE:  The barn in the background was on the lot later owned by William Temm, and was taken down many years later)

Hattie also had two sisters, Adelaide and Abigail, who lived in Portland all their lives. Hattie named her daughter Adelaide after her sister.  Hattie's father, William Sanford Morgan, served in the Navy during the Civil War. I've been able to trace the Morgan line as far back as the mid 1700's, to Worcester, Massachusetts. I am left to assume that the Morgans originated in Wales beyond that, but it's anyone's guess. I heard a family story that there is some Indian (Native American) blood in there somewhere. I've yet to discover it, and I highly doubt it. But, the rumor remains, and has been repeated by many of Hattie's descendants. 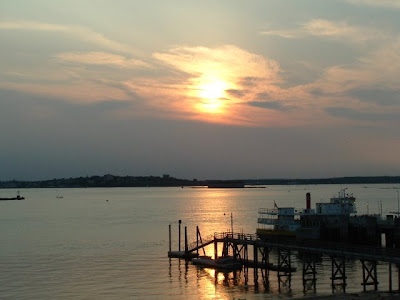 As mentioned above, Hattie was born on Peaks Island in 1866. Her father William lived his final years there from 1910-1920, and his 2nd wife Nellie kept the house going for several years afterwards. I wonder what drew William to Peaks Island. 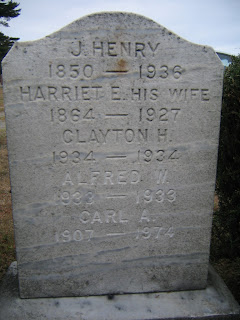 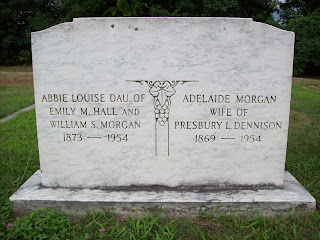 The above burials account for most of the Morgans and Temms, in Forest City Cemetery, South Portland.  John Henry Temm's parents are also buried at Forest City.
Posted by Scott Leonard at 11:57 PM