He was born on the Temm Homestead on Beech Ridge Road in Scarborough Maine to John Henry Temm and Hattie Morgan-Temm, one of their eight children.  He was named after an earlier Edwin Clinton Temm who had died in infancy (and this baby's burial location is a family mystery).

He grew up and attended Scarborough schools, and spent most of his life working as a railroad machinist at the Portland Terminal Company in the South Portland Rigby Yards.

In 1928 he had moved to Portland and married Marion Eunice Dolloff, who had grown up in the Bath area to parents with long held Rumford and New Gloucester roots.  Edwin & Marion's marriage only lasted about nine years, and they had two daughters:

-Eunice Evelyn Temm (1928-1995) grew up in Portland and Windham, married Edgar Marks from Texas, and had three daughters.  This family settled in Manteca, California, and I believe descendants are scattered throughout California today.

-Eva Helen Temm (1930-2003) also grew up in Portland and Windham and went to dental school to become a hygienist.  She married Earl Pushard, a Merchant Marine from Dresden Maine, and had three children.  This family was briefly in northern Maine for a time and settled in Las Vegas and is still largely residing there today.

After the divorce, Eunice married Glenn Buzzell and settled in New Hampshire.  Edwin remarried a few years later in 1943 to his neighbor across the street in Westbrook, Laura Isabelle Butler (lovingly referred to as "Aunt Isabelle" by many people).﻿

They bought a house on Pope Road in Windham and had three children.  Edwin passed away in 1964, and Aunt Isabelle held down the Pope Road house until her recent death in 2011.  Aunt Isabelle will always be fondly remembered as the family genealogist.  She was invaluable to me in my own research, and we had a lot of fun together solving some of the family mysteries.  She died just shy of her 90th birthday, and I'm very grateful of the time we spent together, and of her assistance in tracing the Temm ancestry.

Edwin and Isabelle are buried at Eastern Cemetery in Gorham. 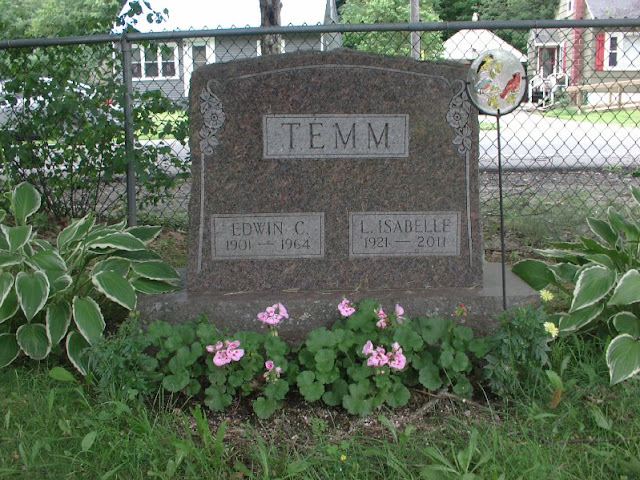 Posted by Scott Leonard at 3:10 PM