The Burrill Family of Fairfield Maine

The Burrill (also written as Burrell) surname is purportedly rooted (at least for our ancestry) in the Anglo-Saxon name Burwell, which is derived from the Old English byrig-wiellw, which means 'town well' or 'fort by a spring'.

Early origins of the name stem from those families that resided in the township of Burwell, as such township was located in each of Northampton, Cambridgeshire, and Lincolnshire.  Anyone with this last name would have ancestors originating in one of these three East England counties.

According to Ancestry trees (which can be dubious in nature), my 13th great grandfather was Edmund Burwell (1485-1549), from Suffolk (closest to Cambridgeshire), and is the furthest I've been able to trace the line.  Edmund's grandson Thomas Burwell, along with Thomas' son John, sailed to Connecticut about twenty years after the Mayflower arrived, but later migrated up to Plymouth Colony.  Many other Burwells from England had sailed directly to Virginia Colony at the same time.  Our branch of the Burwell family name had changed to Burrell/Burrill.  Several of these settlers married into lines that descended directly from Mayflower passengers, much like all colonial families.

Bela Burrill (1756-1816) was my 5th great grandfather, and a direct descendant of the Burrell family from Weymouth, MA.  At the age of nine, while the family was living in Abington, in Plymouth County, his mother (Anna Vinton) was in Maine and died giving birth to Bela's youngest brother Ziba.  According to online trees, Bela's father John Burrill died in Abington on the same day (12 Mar 1765).  I have yet to find any backup records for this date coincidence (so it could be an error), but if true it could prove to have been a sad tale.
Bela fought in the Revolutionary War for five months, in Capt. James Lamont‘s Company. Private 22 July 1775 to 31 Dec 1775.  Afterwards, he somehow found his way up to Somerset County, Maine, where he met Hannah Colemore, a Sagadahoc, Maine native.   Bela fought in Captain James Lamont's Company from 22 Jul 1775 to 31 Dec 1774.  Bela's brother John fought in the Revolutionary War, in Capt. Gould's company, Col. John Greaton's regiments, among others, and fought five and a half long years. His father John was a Sergeant and his grandfather John was a Captain.

Bela and Hannah settled in Fairfield, and had approximately nine children.  Their son Hull Burrill was a veteran of the War of 1812 and a prominent attorney from nearby Canaan, and father of 10.  He appeared in many Somerset County court records going after people for failure to pay him money.  Their son Jonas lived in nearby Clinton, and their son Bela Jr. lived in nearby Albion (now China).  Another son Benjamin Burrill (1782-1857), 4th great grandfahter, grew up in Fairfield and took on farming, just like the Colemores, Emerys, Sibleys, and Osborns who were his neighbors.  I have yet to establish proof that Benjamin is the son of Bela (an established John Alden descendant), but other applications to the Mayflower Society have succeeded for Benjamin's descendants in the past.

In 1803, Benjamin married Margaret Sibley, daughter of English, French Huguenot and Nova Scotian immigrants, and they had five children.  In July 1825, he sued his brother Hull for a fraudulent conveyance of 82 acres of land in Canaan Hull had sold to him when he didn't actually own the property.  Hull never showed up in court, and Benjamin was awarded his money back. [Source:  Somerset County Court Records]. 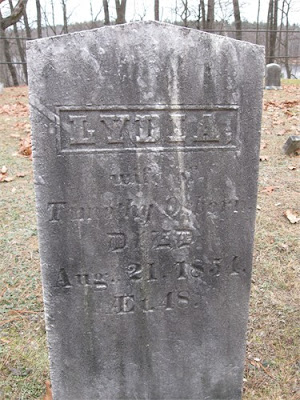 Jacob died very young, and only a few years after marriage.  A couple of years later Lydia married Jacob's own younger brother Timothy Osborn (1805-1898), pictured below: 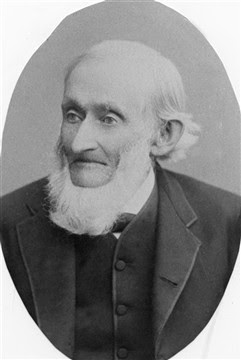 Their daughter Lydia Osborn married Charles Samuel Fuller (who was Timothy's cousin!).  Lydia and Charles were my 2nd great grandparents.

As is often the case with early New England families, another set of Burrills figure in to the family:

Below is a pedigree chart of Lydia Burrill-Osborn-Osborn.  She was 25% French, 75% English. 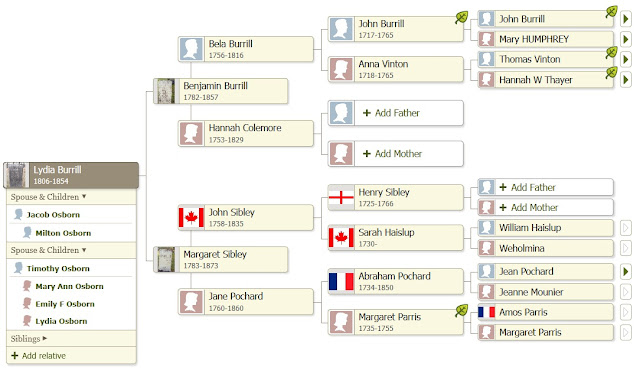 Posted by Scott Leonard at 1:21 AM