Mathew John Leonard (1854-1939) was one of eleven children born to Mathew & Anna Leonard of The Burrow in Portraine/Donabate, County Dublin.

Mathew and two of his sisters (Elizabeth and Ellen) sailed from Londonderry England on the ship S.S. Caspian, arriving in Boston Harbor on April 8, 1881. He was part of the mass migration of Irish to New England for industrial jobs, in the wake of the Irish Potato Famine and Cholera outbreak of the mid to late 1800's. 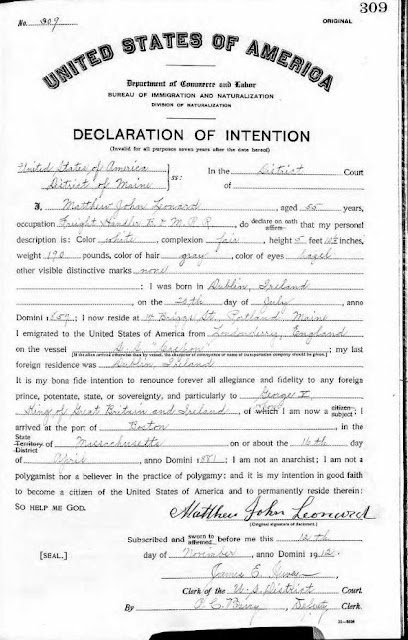 While he was my first direct Leonard ancestor to set foot on American soil, he wasn't the first in his own family to arrive. His uncle, Thomas D. Leonard (nicknamed "Prod"), had already set up a florist shop on 648 Congress Street in Downtown Portland Maine in the 1850's.  Prod had escaped at the height of the Famine, which must have ravaged the Leonard family badly, and had bought up an entire block of land, including several side by side houses, to entice his family back in Portrane to come and join him.

Upon Mathew's arrival, he moved up to Portland and took residence in one of Prod's houses.  Mathew started work as a railroad freight handler (and later a watchman) at the Portland Terminal Company, where he worked the remainder of his life, as did his son Matthew Jr.. At that point in time, Portland was becoming a major railroad hub, where 6 main railroads began to intersect there. 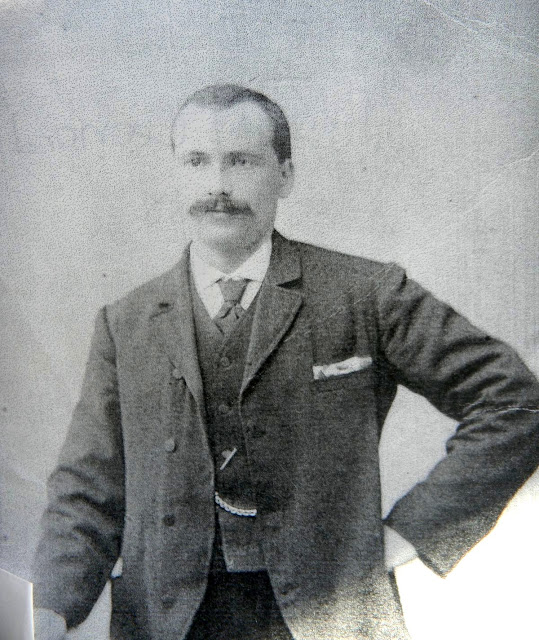 He met Elizabeth M. Howlett (1863-1911), a fellow Irish immigrant from Dublin City (not sure if they knew each other prior to arrival in Portland). Elizabeth was daughter to Thomas Howlett and Sarah Mullarney of Dublin City.  Mathew and Elizabeth married in Portland in September of 1889, and rented property on 14 Briggs Street from his Uncle Prod (who owned all the buildings on that block), down near the waterfront, just a few doors down from Prod's house on 2 Briggs Street. 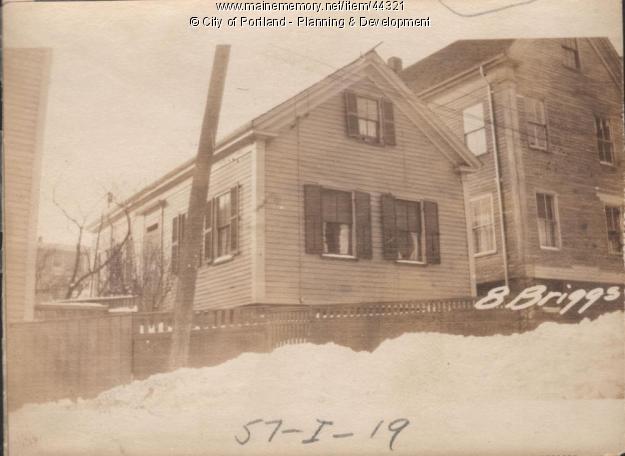 In 1914, a few years after his wife Lizzie died, Mathew purchased 8 Briggs Street (built around 1834) from his cousin Margaret Wade-Lee, a niece to Prod's wife Alice Wade.  That house had been in the Wade family for some time, since Alice's brother Patrick had purchased it.  I'm thinking maybe he didn't want to live in the same house he had shared with his wife while she was alive - or, maybe 8 Briggs was a bigger house, and could house his growing family.

Mathew was known as "Old Matt" towards the end of his life (to distinguish himself from his son Matthew, obviously known as "Young Matt").  Old Matt was known to be a fairly large heavy set man with a very friendly disposition and a slight accent.  He retired from the railroad in 1929 at age 74.  Old Matt had trouble with a prostate hernia, which was very uncomfortable, and visible to everyone.  He also had been badly injured while at work on the Maine Central Railroad:
Towards the end he became senile and had arteriosclerotic heart disease (as well as cerebral arteriosclerosis).  He spent the last two years of his life with this disease, living at Farrington Hospital for the indigent (now known as the Portland City Hospital, behind the Barron Center), until his death at age 84. 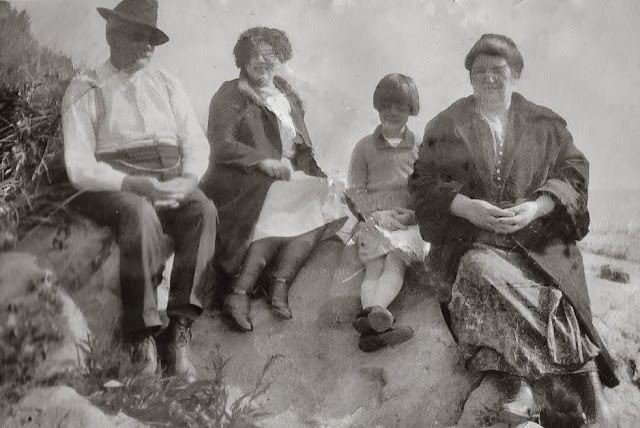 -Thomas Matthew Leonard (1891-1943) (my paternal great grandfather, named after his great uncle Prod) was a bit of a wayward soul. He worked as a janitor, cook, a fireman, a novelty supply shipper, and later as a porter at an advertising company, also having served for three days in the Army in WWI.  He purchased 8 Briggs Street from his father, and two months later married Agnes T. Peterson, born in Westbrook, Maine to Danish immigrants, in 1916. They had one child in Portland, my grandfather Thomas Edward Leonard (whose birth record somehow says Thomas Mathew Leonard Jr.). Thomas Mathew's father Mathew, as well as his own brother Mathew, lived at 8 Briggs Street with the family.  Thomas Mathew died of emphysema at on October 15, 1943, at age 52 (the anniversary of his own mother's death).  My great grandfather Tom was described to me as a tall, lanky man with dark blue eyes who always carried a pipe to smoke with, and was a heavy drinker.

-Sarah Gertrude Leonard (1892-1916) was nicknamed Sallie (which was a common nickname for Sarah at the time).  She married a laborer named Michael Peter Petroski, born in Detroit to Russian parents.  They married on August 20, 1914 when she was five months pregnant (it was also her brother Thomas' 23rd birthday...).  They had one son, Leonard Petroski, who died in infancy in 1914.  Sally died one year later of tuberculosis, at age 24.  Sallie and her son are buried in the family plot with her parents and brother (Thomas Matthew).  Her death record states that she had TB for two years, which would mean she had contracted it prior to her pregnancy.

-Matthew John Leonard, Jr., (1895-1985) worked at Portland Terminal Company with his father. He married Elizabeth B. Graney, daughter of Mary Duran and Patrick Graney, and part of the large group of Graneys that moved from Galway Ireland.  Young Matt and Lizzie lived nearby in Portland's West End. Prod's daughter (Elizabeth Ellen) also married a Graney from the neighborhood (she and her family ended up renting 2 Briggs Street from her father).  Young Matt had two sons, John and Richard. 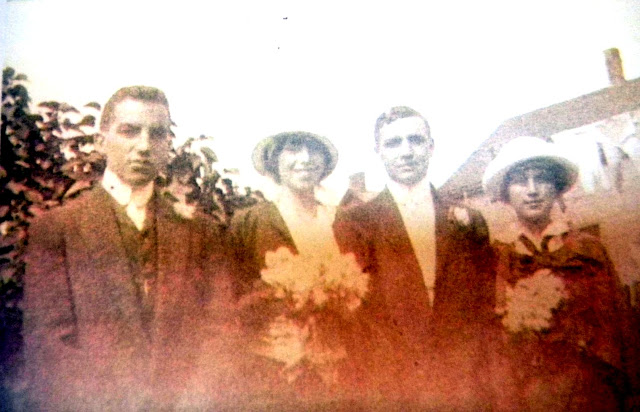 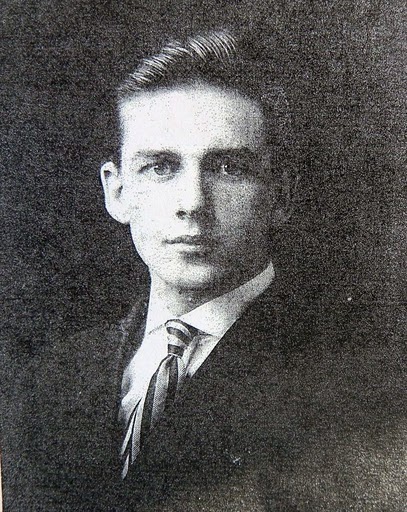 I THINK this is my great grandfather
Thomas Mathew Leonard


In the 1970's that entire block of Briggs Street (then owned by others) was deemed blighted, and taken by the City through eminent domain proceedings, and conveyed over to the Redevelopment Agency.  It was completely razed and public housing was created, with a large parking lot and playground.  I managed to find pictures of the old houses by using 1924 Portland Tax Records, and they can be found here. 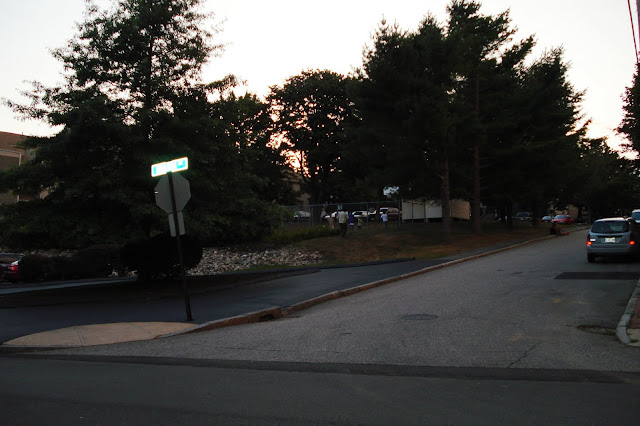 As for Uncle Prod, it's interesting that he had the means to make it to the USA, marry his wife Alice, father two daughters, as well as have a servant (Johnnie Murray), and own the entire Briggs Street block, all on a florist's income. Prod died in 1912. His estate took a long time to settle, and Old Matt was the executor on it through 1928.  Prod's two daughters, Mary Leonard-Haley and Elizabeth Leonard-Graney, successfully got Old Matt removed as executor on the estate (claiming that he was taking too long to settle it), and placed a third party in charge of the estate, despite Old Matt's formal complaint that they were embezzling from the estate before it could be settled.

Mathew's sister, Annie Leonard-Quinlan-Batchelder, had moved from The Burrow to Portland specifically to collect on Prod's estate.  She also meddled in Mathew's estate once he became senile, and, with the help of an attorney, got herself named Executrix of his estate, and managed to get his immediate family cut out of the Will.  The antics of Evil Old Annie were still talked about for many decades thereafter.

In 1939, just after Old Matt had died, Annie also managed to get the 8 Briggs Street property out from under his son Thomas Matthew (who had just mortgaged the property at $150, I guess he couldn't pay the mortgage).  Annie sold the property in July 1942, to Lucille Chase.  This was about a year before Thomas landed in Mercy Hospital with emphysema, where he died in October of 1943.  Since his death certificate stated that his residence was 8 Briggs Street, I'm assuming Lucille may have kept Thomas on as a tenant until his illness and death. 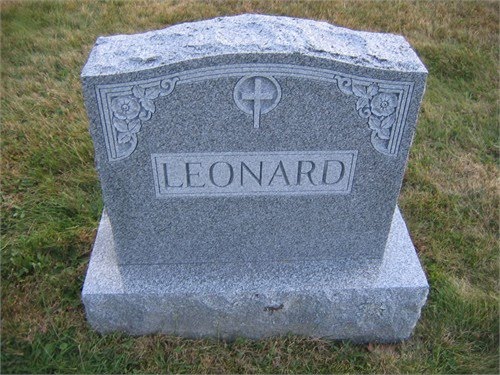 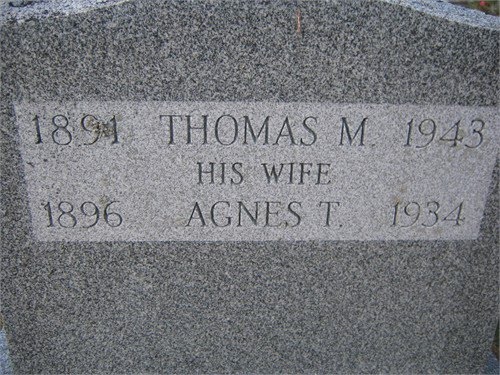 
The above gravestone was ordered by my grandfather, Thomas Edward Leonard ("Tommy"), in 1968...25 years after his father passed.  He placed it at the demand of his cousin, Matthew John Leonard, Jr., (Young Matt) who was aware that Tommy had received the bulk his own father's estate, yet had done nothing about a grave to date, even though it was stipulated as his father's wishes that he do this.

What's a great shame to me is that for the other five people buried here (Matthew John Leonard, Sr., his wife Elizabeth, their daughter Sallie, her son Leonard Petroski, and Annie Batchelder), nobody had bothered to pay for an engraving of their names too.

In May of 2015, I paid for the stone to be updated myself, thanks to the help of Maine Memorial (I hope the stone weathers enough to make this look more even someday): 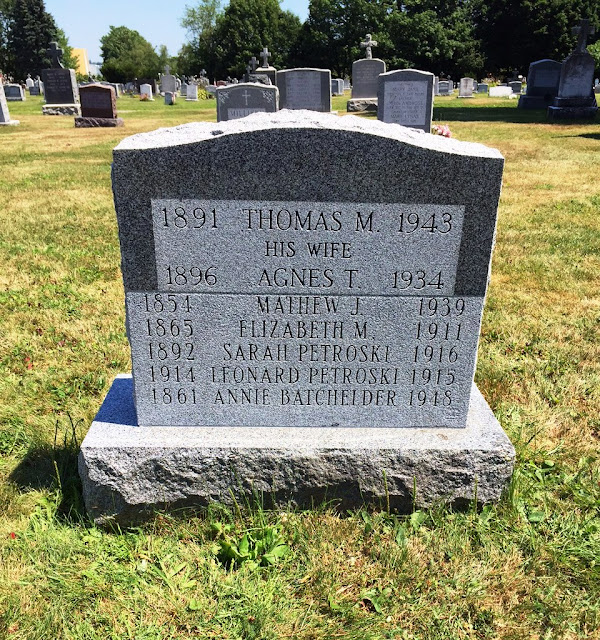 Posted by Scott Leonard at 4:51 PM