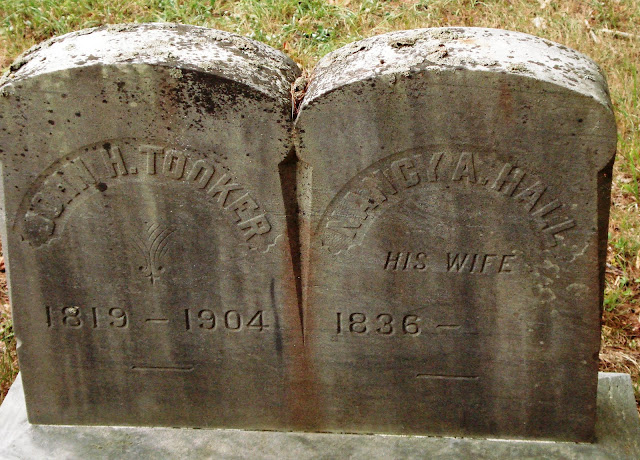 As mentioned in other blog posts, the Tooker family of Connecticut was vast and spread out well over the State.  They frequently intermarried with the Hall, Clark and Bogue families, among other families in 19th Century Connecticut.  Many of these marriages were of first and second cousins.

John Harvey Tooker, Jr. (1819-1904) was one of the many Tookers of Lyme.  As mentioned in other blog posts, his father was born John Harvey Tucker (1790-1874), but changed the family name due to not wanting the family to be confused with a delinquent Tucker family, who also had similar first names.  John's mother was Olive Dart (1793-1872) , whose father, Samuel Dart had migrated from Devon, England (need to verify).  John Sr. died of cystitis, and Olive died of palsey, both in the family home in Lyme.

John Jr. was married to Adelia Slate from 1844 to 1849.  Delia divorced him based on "intolerable cruelty" and him being "habitually intemperate".

John conceived a child named Alice Tooker with Nancy Ann Hall (1836-1917) before ultimately marrying Nancy in February of 1854.  Nancy was one of the many Halls of Lyme.  Her father, Harvey Hall (1805-1859) was from England but lived in Colchester, Connecticut much of his life.  Her mother, Sarah "Sally" Hewlett-Mott-Hall (1805-1895), lived on the Glover farm in Newtown (Fairfield County Connecticut) after Harvey died.  The Glovers were not relatives, so I'm not sure why the move, when she might have been able to live with any of her seven children's families in Lyme.  Sally was daughter to Stephen Hewlett and Mary Daniels.  Her sister Abby married William Bogue and had 11 children.  Her brother Edwin Hewlett married Francina Mott (must have been some relation to Sally's first husband.

Nancy's brother Charles married a Clark.  Her brother Harvey married a Tooker.  It was the way things went, apparently.

-Alice (1853-1920) married George Thomas Bogue (of the Lyme Bogues - who was also descended from Clark and Dart cousins of Alice), and had two daughters:  Alice and Nellie.  Nellie married her first cousin, Willis Manley Clark, who was Francina's son, and they lived in Essex, CT.  Nellie and Willis had six children together.  In 1911, at age 36, only three years after having her sixth child, Nellie was hit by a train in Willimantic, CT, while she was walking on the tracks by herself.  The train apparently tried to signal a warning whistle, but Nellie hadn't heard it since she was deaf.  She eventually turned around and saw the train, and was struck.  She died in the hospital from skull fracture.  Full article of this sad event, as written in the Willimantic Chronicle, October, 1911, is transcribed below:

WOMAN HIT BY TRAIN NEAR TURNERVILLE

A Woman was walking along the track and paid no attention to the warning whistle, turning however just as the engine strikes her.  A woman about 50 years old whose name could not be learned was struck this afternoon by the three o'clock train from New Haven, just this side of Turnerville.  She was walking along the track and was seen by the engineer.  He blew the whistle and she did not seem to hear it, he then applied his brakes but could not stop his engine quick enough to avoid striking her, the woman turned around and as she did she was struck in the shoulder and thrown to the ground.  The train was soon stopped and the woman placed on a stretcher and taken aboard the train.  Word was sent to St. Joseph's hospital in this city and the ambulance called, it met the train and took the woman to the hospital where she was treated for her injuries.

A short time after being taken into the hospital the woman died from fracture of the skull. Word was immediately sent to Dr. Louis I. Mason, the medical examiner, later it was learned that the woman was Mrs. Willis Clark of Hopeville which is about a mile from Turnerville.

The funeral of Mrs. Willis Clark of Turnerville who died in St. Joseph's hospital yesterday afternoon from injuries received in being struck by a train a short time before will be held Friday at 12 o'clock.  The service will be in the Episcopal Church of Hebron and internment will be in the Hebron Cemetary.

The deceased was about 45 years old and leaves a husband and six children.  The engineer felt much grieved at the woman's death.  He said that Mrs. Clark was walking on the tracks and apparently did not hear the whistle.  He put on his brakes, but not soon enough.  The woman, just as the engine approached her turned to one side and as she did the brake beam of the engine struck her.

Mrs. Clark was deaf and had the left the train at Turnerville.  Her home was about a mile and a half this side of Turnerville.

After her death yesterday afternoon medical examiner Dr. Louis I. Mason, who was called and after viewing the remains, turned them over to Elmore and Shepard to be prepared for burial.

-Francina Czarina (1855-1919) was given her middle name due to a Russian woman living with them at the time.  She moved to Montville, CT, and married William Edward Clark (brother to her sister Lizzie's husband Niles).  They had eight children.  Their youngest, Richard William Clark, married his own niece, Viola West, and went to jail for it.  They changed their last names to Williams and moved up to Keene, New Hampshire for a while.  Richard and Viola were married for over 50 years, and had five children together, all of whom lived to be happy normal adults.  I guess the heart wants what it wants...

-Musette Cressie (1874-1948) married Augustus Ferdinand Snow, who was 30 years her senior.  They had eight children together.  Augustus had a son Albert (1880-1949) from a prior marriage (well actually Albert's mother was the neighbor during his prior marriage), who lived with his father and stepmother Musette.  When Augustus died, Albert (being only 6 years younger than his stepmother) married Musette, and adopted the eight children as his own.  Albert was married to Musette for 30 years, twice as long as his father was married to her!

John Harvey Tooker fought in the Civil War from 1862-1863 in the CT 26th Regiment, Company F.   He enlisted on 30 August 1862, and mustered out November 10 of that year.  He finished up in August 1863, completing a nine month enlistment, and was paid $44.78 for clothing/money advanced.  Below is an account of the 26th Regiment, which saw its only Civil War battles in Louisiana:


Here are a few assorted pictures of the Tooker family, including children of John & Nancy Tooker (Francina, Musette, Charles, and Lizzie): 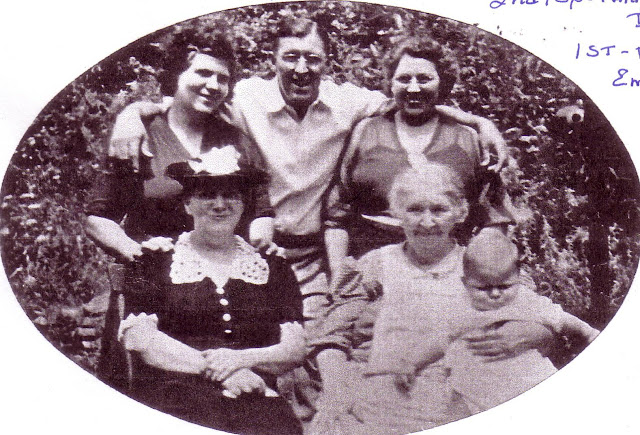 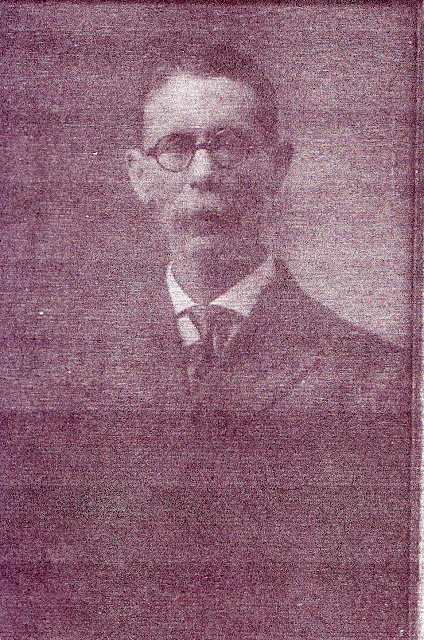 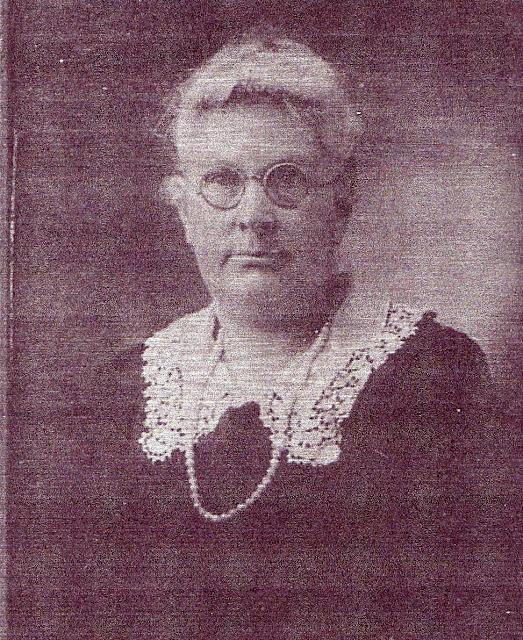 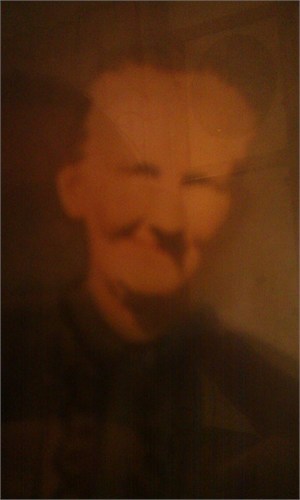 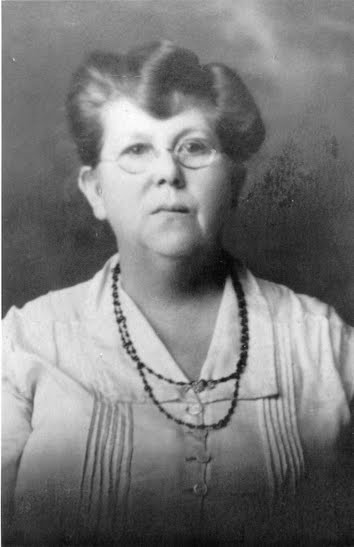 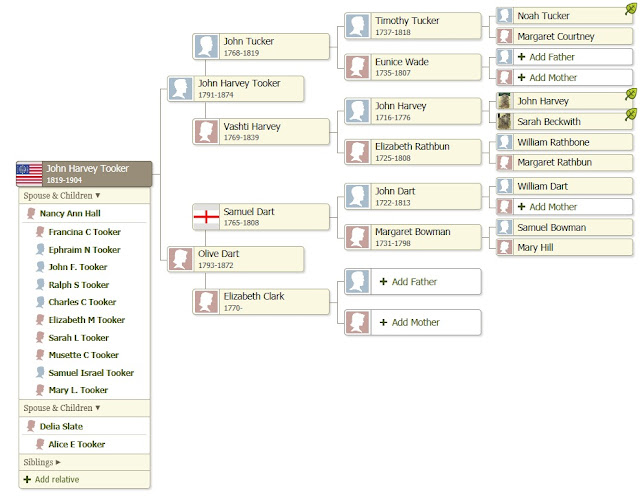 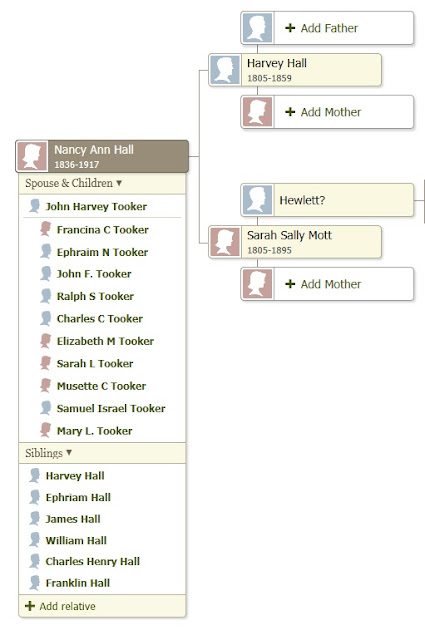 Posted by Scott Leonard at 2:58 AM