The Hewlets of New London Connecticut

This post will cover collected research on the Hewlet family of Groton and Stonington, Connecticut.  This family name has also been written as Hewlett and Hewitt.

According to official Mayflower Society research volumes (the Silver Books), Nathaniel was a 4th generation descendant of John Alden of the Mayflower.

Nathaniel and his wife, Rebecca Grant, had two sons of note (there may have been as many as 8 children):

2. Nathaniel Hewitt Jr. (1746-1823) fought as a Private in the Army during the Revolutionary War, while in his 50s.  He was badly injured in the War, in his leg, thigh and breast, on Butt's Hill, during the Battle of Rhode Island, of 1788.  He received pension and moved to Vermont for the rest of his years.

For a while, I was under the impression that the Josiah above (of Stonington) is the same as the Josiah (of Groton) that was father to my ancestor, Stephen Hewlett/Hewitt (1771-1812), who was a Corporal in the War of 1812.  I learned from the Mayflower Society that they cannot be the same person, because they were having children at the same time in these two different towns.  Perhaps they were cousins?
Anyhow, according to the Providence Gazette, Josiah of Groton had 27 children by one wife.  Not sure how accurate that is! 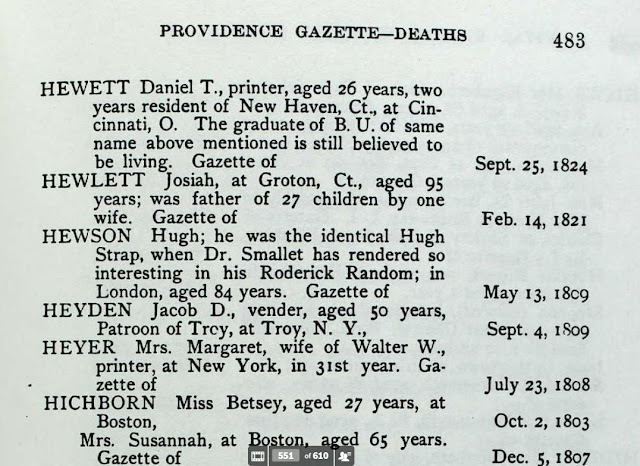 
Stephen and Mary had five children:

4.  Sarah ("Sally") (1805-1895), potentially first married someone named William Mott, and may have had one daughter, Francina.  She later married Harvey Hall of nearby Colchester, and settled in Lyme, CT.  They had at least seven children, including my Great Great Grandmother, Nancy Hall-Tooker.

5.  Edwin (1811-1890) married Francina Mott, who was 14 years his junior, and they had at least nine kids together.  Francina was the daughter of William Mott and, potentially, Edwin's own sister Sally, based on comparing various records.  But, Francina's death certificate does show William as her father, and the mother's maiden name is rather illegible (but doesn't appear to say Hewlett).  What is also interesting is that in 1825, there is a Groton marriage record between William Mott and Sarah "Hulet".  Francina was born in 1825.  So, it's very possible that Edwin had nine children with his own niece.  This kind of thing did happen occasionally back in the day.

Stephen died during the War of 1812, on board a man-of-war (type of battleship).  Mary remarried to Austin Goodale, and lived to be 104.  Mary's obituary appears below:

Posted by Scott Leonard at 8:53 PM