My 2nd Great Grandfather, Charles Samuel Fuller, was the eldest of seven.  His eldest sibling was his sister, Martha Ann Fuller-Sheffer (1838-1918), who lived in Maine, Iowa and Missouri, but who had a connection to Australia that I would like to write about.

First, here is a picture of the eldest four of Charles' siblings, The photo appears to be dated just before 1900, a time after their brother Charles and their parents (Samuel and Ann) had died, after which they moved from Ottumwa, Iowa to Chicago.  Martha soon thereafter moved to Blue Mound Missouri with her husband George Sheffer, to retire and operate a hotel business. Martha was born in 1838 in Maine to Samuel Bean Fuller, a railroad worker with Mayflower roots living in Waterville.  This is the house Samuel's kids grew up in on Front Street, just down the road from St. Joseph's Church.  Their house which was razed at some point before the 1970s, to build the post office: 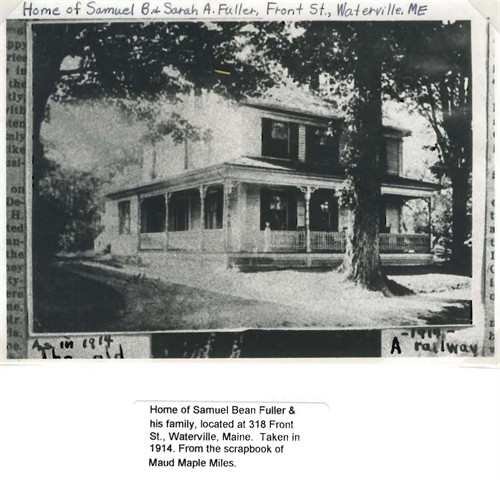 Martha married George Henry Sheffer in January of 1859 in Waterville, Maine (where Martha and family were living at the time).  George, originally from Nova Scotia, had come from a lumber family, and it is believed that he may have met Martha when he moved to Maine to work.

In 1863, George and Martha moved to Ottumwa, Iowa to start up a dry goods mercantile business. Martha's parents and siblings followed them in the following years.  Her father, Samuel Bean Fuller, worked in the dry goods business as well, but after ten years his business was destroyed by a Town fire.

George and Martha had four of their own children, and adopted Martha's niece (also named Martha), when her sister Eva died in childbirth, and raised young Martha as her own:

1.  George Henry Sheffer, Jr. (1863-1908) - George was born in Ottumwa, and worked as a store clerk as a young adult (most likely his father and grandfather's dry goods store).  He moved to Missouri with his parents around 1900.  In 1906, after his father died, he took a trip to Australia (sailing from San Francisco and back) to visit his brother Samuel.  George caught a tropical fever while there (potentially on the ship back to SF).  He suffered with this for two years after he came back from the trip, and died in St. Joseph, MO, at the age of 44, leaving behind a wife (a typist named Dora) and a seven year old daughter.  Dora remarried 16 years later.

2.  Etta W. Sheffer (1869- died between 1870 and 1880) - Young Etta was named after her aunt Julietta Fuller, and died as a child.  She is buried with the family at Ottumwa Cemetery, but the cemetery has no birth or death date information available.


3.  Samuel Fuller Sheffer (1875-1929) - Named after his grandfather, Samuel Bean Fuller, young Samuel Fuller Sheffer was born in Ottumwa, and married his wife Alice there in 1895.  In December of 1899, they had their first of two children (Mary), and very soon thereafter, in 1900, when his parents moved to Missouri, he made the bold move to Melbourne Australia for a new life in merchant business at Chamberlin Medicine Company.  In Australia, Samuel and Alice had their second and last child, Howard Melbourne Sheffer (nicknamed "Mel").  Samuel declared his residency to be San Francisco (according to a passport application from 1917), while residing primarily in Sydney (where he named his home "Wapello", the County in Iowa he was born in).  Mel carried forward his father's entrepreneurial spirit and worked as Managing Director of Sheldon Drug Company in Sydney.  See advertisement and photo below from 1937: 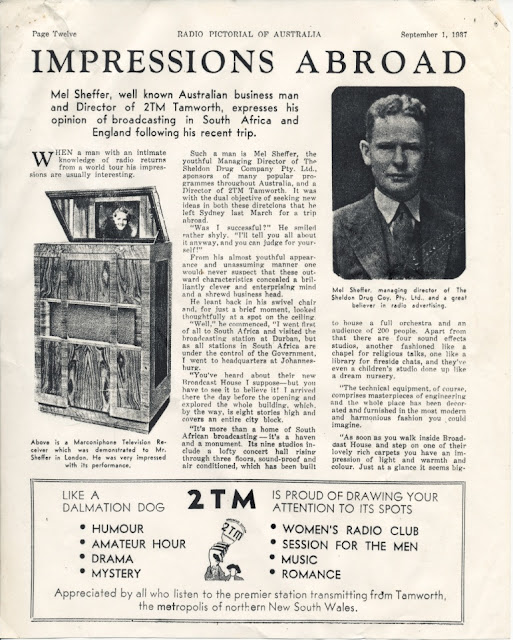 Sheldon Drug Company was where the "Rexona" brand of soaps and antiperspirants were developed, and, in particular, Samuel's wife Alice gets the credit for the invention! 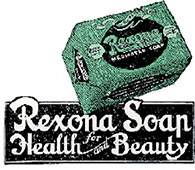 Rexona enjoys a long business history worldwide, and is now owned by Unilever.  More on the history of this brand, and the Sheffer's early business, can be read here.  Samuel's son Mel had six children, and many grandchildren, all of whom are happily residing in the Sydney area.

4.  Frank Merriwell Sheffer (1882-1949) - Frank worked in several odd jobs and also pursued his photography passions.  After the death of his father, he and his brother and mother sailed to Australia to visit his brother Samuel.  Not long after his return, his brother George died, and Frank was later drafted into both WWI and WWII.  On his draft card it stated he had blue eyes and brown hair.  At the end of Frank's life he worked as a studio portrait photographer.  He died in Humansville, Missouri in 1949 of myocarditis, leaving behind his wife, Agnes May Fisher.  I don't believe they had any children.

As mentioned above, in addition to having her four children, Martha raised her niece Martha Ann Foland (1889-1961) as her own.  Young Martha was born to Martha's youngest sister, Evalyn Edith Fuller-Foland (1856-1889) who died giving birth to her.

***
Below is the last known picture of Martha, and I believe this was taken during her visit to Australia in 1915, after the deaths of her husband George, and her eldest son George, Jr., and it was a couple of years before her own passing.

Here are gravestone pictures from the Sheffer lot at Ottumwa Cemetery: 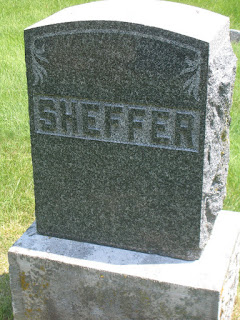 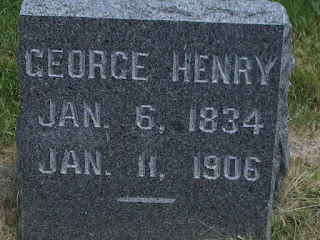 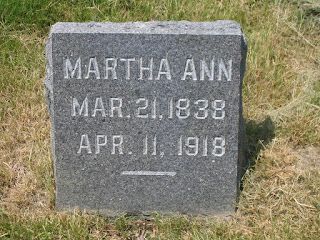 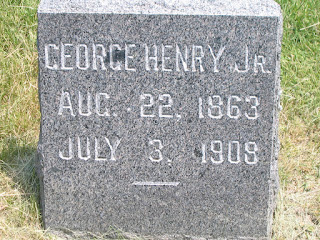 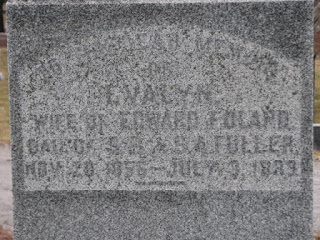 Posted by Scott Leonard at 3:34 PM