My 9th great grandfather was Thomas Clarke of Plymouth Massachusetts, who arrived on the ship Anne in 1623.

He was believed to be son to John Clarke, who was an early settler of Jamestowne, Virginia.  I've written a page dedicated to the compiled research on John here.

Depending on who you believe, it is stated that either John or Thomas was a master ship mate of the Mayflower.

According to this site, the History of the Town of Duxbury, declares that it was actually Thomas Clarke who was the Mayflower ship mate.

A memorial posted next to Thomas' gravesite in Plymouth also repeats this tradition: 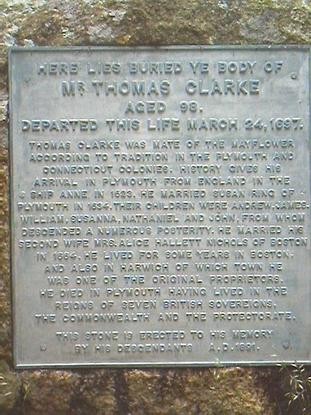 A volume published in 1881 entitled "Clarke-Clark genealogy: records of the descendants of Thomas Clarke of Plymouth" by William W. Johnson, addresses the question of whether it was Thomas who was the ship mate of the Mayflower.  It holds that Thomas' grandson Nathaniel had always carried that tradition that it was his grandfather who was the ship mate in question, and that Clark Island in Duxbury Bay is named for Thomas.  I wonder if there was some kind of family dispute back then regarding whether it was Thomas or his father...?


This volume provides a poem written about Thomas which appears to back up the Mayflower ship mate hypothesis: 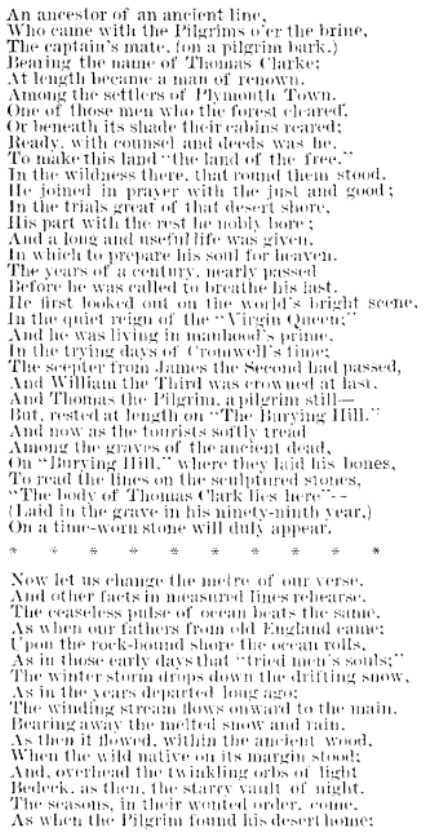 As with any family tradition, the one that is most flattering is the most often repeated.  I'm certain that anyone who has claimed descent from either John or Thomas (or both, if we are to believe their mutual kinship), has likely carried forward the idea that their ancestor was a Mayflower ship mate.  There appears to be a lot of writing supporting either hypothesis.

Thomas's son, John Clarke of Plymouth, married Sarah Smith and relocated the family west to Lyme, Connecticut, situated on the Connecticut River.  John and Sarah were the forebears of the entire Connecticut Clarke family, a vast and complex family group with many descendants still in the same area today.

For more about what has been written about John Clarke, potential father to Thomas, please read here.

Posted by Scott Leonard at 1:44 AM