In 1763, he married a Ruth Graves (her name was possibly Ruth Sterling).  They had at least eight children, Sterling Clark (my 4th great grandfather), Ruth, Hannah, Lyne (died as an infant), Luceney, Sarah, Abigail, and Samuel III.

Samuel moved to nearby East Haddam Connecticut, and was the first Clark in my family to settle in East Haddam, where many live today.  Earlier East Haddamites were also ancestors of mine, and ancestors of many who married into the Clark line (a tangled web, for sure).  Samuel was a Revolutionary War Minuteman, and served in the Connecticut First Regiment under Captain Eliphalet Holmes.  He had children who stayed in East Haddam, yet some moved over into Central New York State, and have descendants still there today.  I'm uncertain about what caused this migration of several hundred miles.

Below is the original manuscript application for a local pension in the state of New York dated Feb. 1820 Application of Samuel Clark aged 73 in which he states " he enlisted as a corporal in the month of January A.D. 1777 under Captain Eliphalet Holmes in the first Connecticut Regiment commanded by Colonel Jedediah Huntington in the Continental Army of the United States for the term of three years… that he continued to serve until he was discharged from the service…January 1780.." He continues with details regarding previous pension applications and his current financial status and signs with his "X" on the last page". 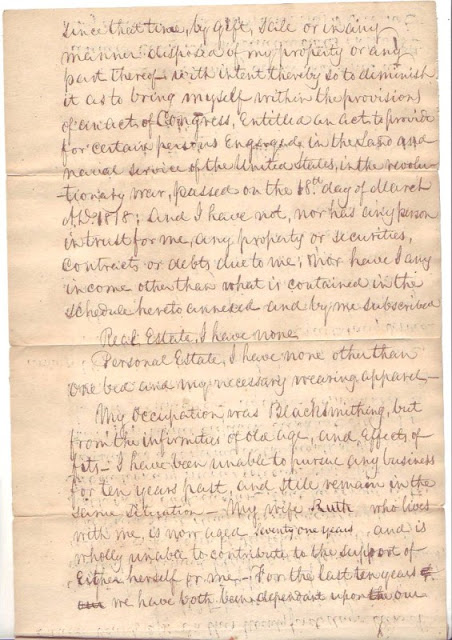 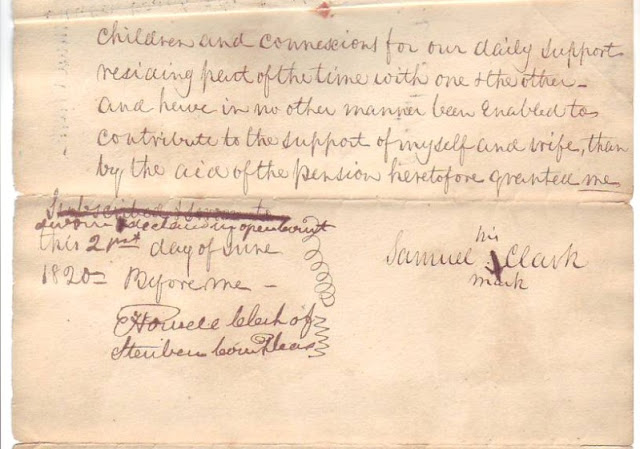 Samuel had a twin brother, Elijah, who also fought in the Revolution, but died in 1790.