Niles Martin Clark (1866-1911) was my great grandfather.  He was the second youngest of 12 children born to Leonard Sherman Clark and Esther Phelps Martin of East Haddam, Connecticut.

The name "Niles" features prominently throughout the Clark family of today and long ago.  Niles Martin Clark, for instance, was named after his great grandfather, Niles Phelps (1771-1848), who himself was named after his great grandmother, Abigail Niles-Tiffany (1675-1739) of Braintree, Massachusetts.  Abigail's grandparents (John and Jane Niles) had migrated to Mass. from England shortly after the Mayflower voyage, but John Niles' father's surname was written as Nyle, and this family were thought to have been from Dorset, England.

At age 19, Niles Clark had a short lived marriage to a Bertha Watrous, and just after his 21st birthday he married Lizzie Matilda Tooker of Lyme.  He lived in Suffield and Granby, and worked as a blacksmith and horseshoer all his life.


-Claudia Cressie Clark (1892 – 1961) (nicknamed 'Claude') married Charles B. Smith, and lived in Beekman, NY, and later Union Vale, NY.  In 1927 she moved to Newburgh, NY (later to Fishkill).  She had four children:  Kenneth, Isabel, Harold (who also went by "Jim") and Ruth.  Claude divorced Charles around 1939, and immediately remarried to a well driller named Leonard "Len" Bell, and remained in Newburgh, on Gardnertown Road, then later on Fostertown Road.  After her divorce from Charles, it appears that the kids stayed closer to Charles (who claimed he was widowed on the 1940 Census, so it's clear there were hard feelings - in fact, for the 1930 Census, Claude claimed to be widowed as well, and she wasn't even divorced yet).  Claude and Len moved to Montgomery NY in 1949, and Claude died a widow in 1961.  Claude and Len are buried together at Cedar Hill Cemetery in Newburgh, NY.

-Niles Carrol Clark (1894 – 1918) was named for his father, and grew up in a Home for Boys in Hartford, CT, settled in Hartford, but then was drafted to serve in WWI, only to die of pneumonia in France after the war was over, while he was waiting to be picked up.  It took THREE YEARS for Lizzie to get his body shipped back to the USA, and he is now buried next to his mother in Forest City Cemetery, South Portland, Maine.  According to Niles' nephew, the family lore has it that young Niles was "shot by German soldiers whilst rescuing Captain Eddie Rickenbacker from his downed airplane during WWI and died in France from complications of his wounds, probably gangrene."  This runs afoul of the more boring death record in City of Portland's vaults, stating he simply died of pneumonia.  Spanish Flu was the common culprit during 1918.  Niles was a hero to the Clark family, and his younger brothers Leonard and Frank each had sons they named after him.

-Clifford Nordell Clark (1896 – 1963).  "Cliff" was put in the Meriden, CT Home for Boys.  He ended up serving as in WWI, and after the war lived in Newburgh near his brother Leonard during the 40s.  He traveled the world as a seaman, lived in Mississippi for a while, and ultimately settled in Galveston, Texas just two years prior to his death, when he was working as a messman for a shipping company.  From what I hear he was quite shellshocked from the War, and according to those who knew him, he would cower on the ground into a combat crawl anytime a loud noise occurred.  His brother Leonard spoke of him as crazy, and that he would always be saying he was just coming from Cleveland, or just about to go to Cleveland, no matter where he was.  Cliff's obituary in the Galveston paper stated that his brother Leonard lived in Corpus Christi, TX, yet Leonard had retired 3 years prior to that to Phoenix, AZ (but according to Leonard's son, he had moved to AZ a bit later than that).  According to one of Leonard's children, Leonard (aka "Red") talked about Cliff quite a bit and yet they never saw each other.  It's a shame that for a brief moment in the early 60s, both brothers were living very close to each other before Cliff died.  Cliff had only one child, Johnny Clark, who was living in Scarborough, Maine at the time of Cliff's death in 1963.  According to Cliff's nephew, Cliff had fought in WWI, but I don't see a draft card for him at present.  Cliff was drafted into the "Old Man's Draft" of WWII in 1942, at which time he was staying at the Stamford "Sunset Home Town Farm", a poor farm, and had already one toe removed due to diabetes. 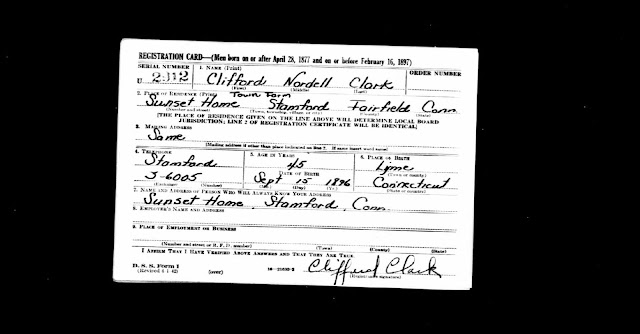 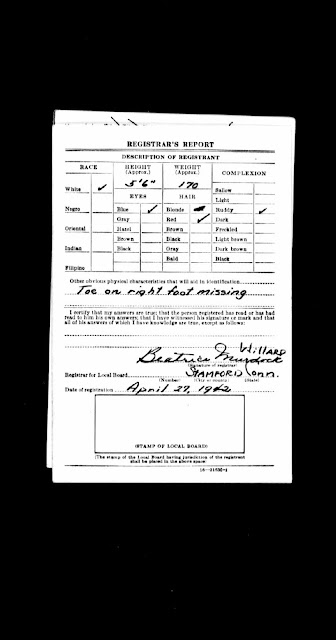 Also regarding Cliff, on a 1955 ship register from Southampton England to NYC, Cliff had only checked one bag, while the rest of the passengers had checked between 3 and 7 bags.  Cliff died of a heart attack just a couple of years after settling in Galveston TX, but had suffered from diabetes for a long time, and it was later told to me by a distant cousin that Cliff had had a leg amputated due to his illness.


My hope is that someone researching the Clarks might know the whereabouts of Johnny, and if he's still alive.


-Leonard Sherman Clark (1899 – 1974) was named after his grandfather Leonard Sherman Clark, yet was nicknamed "Red", due to his red hair.  In his later years, he simply went by "LS Clark".  Red was raised partly in the Temporary Home for Boys in Haddam, CT.  He had five children, lived most of his adulthood in Texas, and retired in Phoenix as an industrial engineer.  He was one of the few Clarks of his time to have ever gone to college, and one of the few who didn't work in blue collar trades.  His very interesting story can be read here.

-Ethel Dorothea Clark (1903 – 1981) first married in 1920 to German immigrant Oscar Hellmuth, and had one daughter Cecelia (1921-1991).  They divorced in 1930, and she immediately married a tree surgeon named Cyril Adams (originally from San Francisco), and while they had no children, they did live in Hull, Mass, Bristol, CT, and then later in San Francisco and Richmond, California.  Ethel did a lot of factory work, including as a sorter in a tobacco factory (1930 census), and was also a housekeeper.

-Herbert Francis Clarke (1905 – 1982) was my grandfather, and was nicknamed "Frank".  He lived most of his life in Scarborough, Maine and worked as a stonemason.  His youth was spent at Opportunity Farm in New Gloucester, Maine.  He had 12 children (three more than his father), and many descendants.

-Geraldine Frances Clark (1908 – 1987) grew up in Granby, CT and Scarborough, ME.  She married Fred Meserve, moved to Rochester, NY, and later married William C. Smith.  At some point between 1965 and 1979, she and William moved to Bailey, Mississippi to be closer to her nephew Bill's family and her niece Florence's family, where they lived in side by side trailers on Grissom Road.  No descendants.  Geri's ashes are buried on top of her brother James' body in Ossian, NY.

-James Raymond Clarke (1910 – 1979) also spent some of his youth in Opportunity Farm, with his brother Frank.  He moved to western NY and was married with seven children.

The Death of Niles Martin Clark

Niles had been battling tuberculosis, whether he knew it or not, and died of it at age 45 in the hot summer of 1911 in a barn in North Lyme, with a contributing factor of heat exhaustion.  During the time of his sickness and death, Lizzie dispensed of her sons to various orphanages, took the family fortune and remarried three more times.

While the above story of Niles' death rings true when reading available records, there was another, much more entertaining story passed down regarding Niles (through the children of his son Red).

According to one account, Niles was a very powerful man; and that he could hold the hind leg of a mule in his hand while someone coaxed the mule to kick and, he was that strong, that he could hold the mule's leg and it could not kick him. At the same time, he was a man who liked to drink and gamble a lot. One night, drunk, someone bet him that he couldn't do it but, being drunk and a bettor, Niles accepted the bet. The mule kicked, his hand slipped, he got kicked in the chest and died under a big tree in the backyard days later of a stove-in chest.

Now given that Niles' death certificate has him dying of tuberculosis, and given that his father, Leonard Sherman Clark was a man with the height of 5' 5 1/2", I'm having trouble believing this entertaining version of old Niles.  Besides, given that Niles' wife, Lizzie, was a controlling and very tough woman, it would stand to reason that she would only marry gentle and easy going, hard working men, which most of the Clark men were.  It's difficult to imagine one of the old Clarks being a 'powerful man' of physique and temperament.

Pedigree Chart for Niles can be found below.  He is of 100% English colonial descent, from all research done to date. 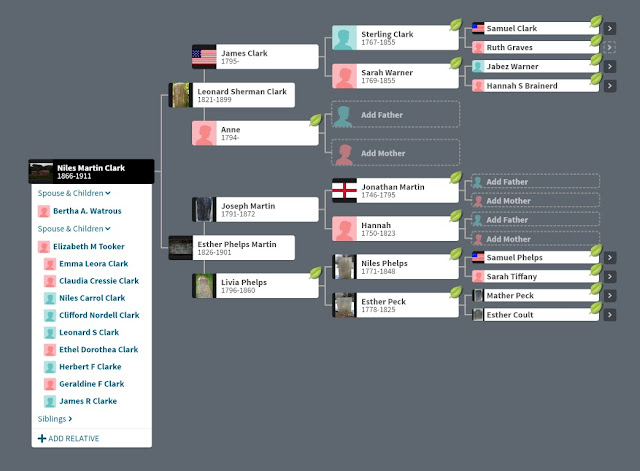 Posted by Scott Leonard at 1:19 AM