The Wade Family of Dublin Ireland

James Wade (1797-1871) & his wife Margaret Riley were farmers from the Burrow of Portraine, County Dublin, Ireland who moved to Portland, Maine like many Irish Catholics during the Famine.  They had eight children, three of whom (Alice, Patrick & Mary Ann) figure prominently in my family tree, though they are no direct relation to me.  There are records of a couple Wade families living in the Burrow of Portrane near the Leonards.

A different James Wade of Portrane apparently had a somewhat contentious relationship with Mathew Leonard, who lodged a complaint in 1887 against him for allowing seven of his chickens to trespass on Mathew's freshly cropped land. 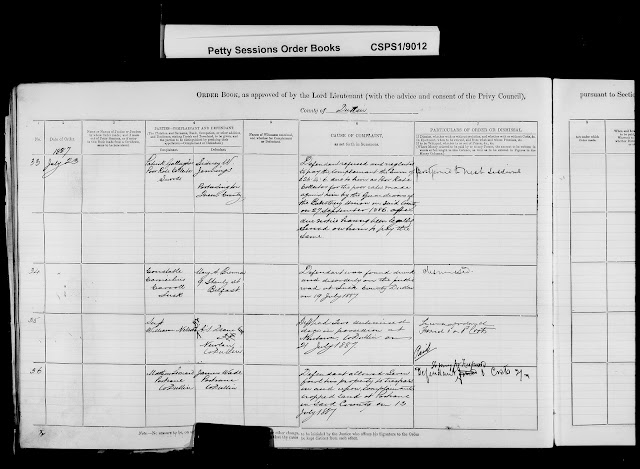 Some collected information regarding James and Margaret's eight children (with hyperlinks pointing to baptismal records from Donabate Parish):

1.  Alice Wade (1827-1865) married my great grand uncle Thomas D. Leonard (younger brother to James' neighbor Mathew mentioned above), moved to Portland Maine and lived there on 2 Briggs Street.  They had five daughters, two that survived to adulthood.  Alice died of consumption in 1865, just 6 six years before her younger sister died of consumption.  Thomas died in 1912.

3.  Patrick Joseph Wade (1834-1912) and his wife Jane McWilliams (1847-1907) came from Dublin Ireland and arrived in Portland Maine in 1861.  They lived on 90 Danforth Street from 1866-1879.  He bought 8 Briggs Street in 1867 from a Bill Lindsey.  Patrick lived there off and on (the primary tenant was Patrick's elder sister Alice & her husband Thomas).  Patrick and his family moved to the State Club Stables, in an adjoining rental house on 684 Congress Street in 1886, where Patrick worked as a hostler (stable hand).  In 1906, Patrick eventually returned to 8 Briggs Street.

Patrick's father, James, moved to Portland at some point prior to his death in 1871, although no Portland Census records seem to pick him up in 1870.  James died about 6 months before his daughter Mary Ann did.

Patrick & Jane married in Portland in 1866, and had twelve children.  More about this family can be found here.

Many of the Wades listed above are buried at Calvary Cemetery, South Portland, near the Leonards in my family.  There are many other Wades buried at Calvary, and they could be cousins of the above.  Many of them appear to have lived on Salem Street (which runs perpendicular to Briggs).

I find it interesting that so many people in this extended family died in the year 1912.

Another Wade family lived in the same part of the West End of Portland, on 3 School Street (later moving to 83 Salem Street)...although I've yet to confirm exactly how they may be related to the above:

2.  James E. Wade (1867-1909) worked as a "U.S. Laborer", and married Julia Corkrey in 1901.  They had three children:  Margaret, Edward and Julianna, and James passed away just after conceiving Julianna.  These three kids lived well into their 90s, much unlike the prior generations.

All of this family (except Alfred) is also buried at Calvary Cemetery.  It would be interesting to see if perhaps this Patrick was cousins with the Patrick mentioned above, who was about seven years older. 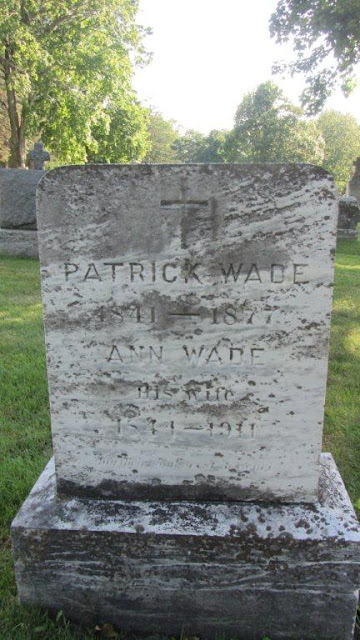 Below is the 1847 tenant farmer roster for The Burrow, taken from "Griffith's Valuation".  James Wade is located as tenant for several properties, along with a William Wade (who might be his brother or father). 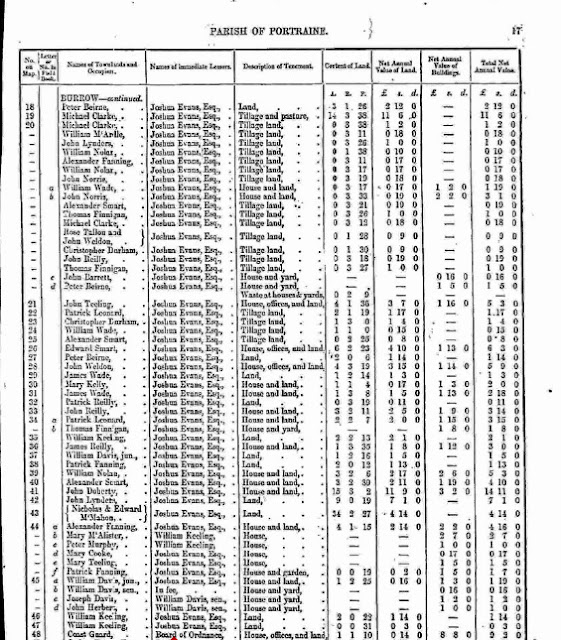 Posted by Scott Leonard at 6:37 PM