The Dressers of Scarborough Maine

The Dresser Road in rural western Scarborough is about 8/10 of a mile long, and was home to the historical Dresser family (originally from Rowley, Massachusetts) for over 150 years, from about 1735 to 1900.

The earliest record of the road being named Dresser Road that I have found to date would be a property deed dated December 1880 from Dominicus Libby to Sarah Jane Temm.

A history of the Dressers of Scarborough:

Around 1735, Nathaniel Dresser (1683-1749) migrated north from Rowley, Mass with his wife Elizabeth (1689-1736) and his son Richard Dresser (1713-1783) to the fertile farmlands of Scarborough.  Elizabeth died shortly after arriving.  Nathaniel was killed by an Indian on Scottow's Hill near the home of Leonard Libby.  Neighbor David Libby killed the Indian that did the deed. Nathaniel is reputed by the Scarborough Historical Society to have been the last person killed by Indians in Scarborough.

The same year that Nathaniel died, his son Richard married Mindwell Munson of Scarborough.  They had five children, most of whom moved to neighboring Buxton:

-Mary Dresser married neighbor Elijah Libby, but she died young, and had no descendants.

-Mindwell Dresser married neighbor Elijah Libby after her sister died.  No descendants there, either.

-Wentworth Dresser (1762-1842) was the only one in the family to remain in Scarborough.  He married Sophia Holbrook (sister to Nancy above).  They managed the farm on Dresser Road.  They had eight children, all but one whom relocated to other parts of Maine:

1. Daniel Dresser moved to Saco, and married Sarah Libby of that town.  Their only child, Ira Dresser, relocated to Cincinnati, Ohio.

2. Sarah Dresser-Dewey-Smith also moved to Saco, and had four children with two husbands (both from Vermont).

3.  Ira Dresser married Nancy Smart and also moved to Saco, where they had eight children. Ira was a clothier at Saco Clothing Store, according to this ad from 1856. 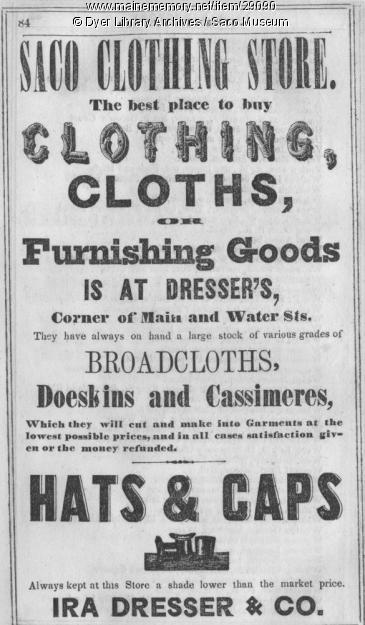 4.  Robert Dresser married Sophia Rose and moved to Portland, where they had nine children.

5. Lydia Dresser married John Blake and moved to Portland, where they had five children.

6.  Israel Dresser married Elizabeth Banks and moved to Castine, and later Brewer, Maine, and had well over a dozen children.

7. Joseph Wentworth Dresser married Eunice Deering (daughter to Samuel Deering of Gorham).  They had five children and relocated to Kansas around 1855.

8. Josiah C. Dresser (1816-1868) was the youngest child of Wentworth, and the only descendant of the Scarborough Dressers to remain in Scarborough.  He kept the Dresser Road farm going.  He married Lydia Moulton, and had three children in Scarborough:

-Melville Dresser (1851-1885) married Ella Smith, and remained in Scarborough, but had no children.

-Wilbur Dresser (1848-1925), pictured above, kept the Dresser Road farm going.  He married his neighbor Sarah McLaughlin (part of the Scotch-Irish clan that migrated to Cumberland County and were early founders).

Wilbur expanded the farm's business around 1893, and got into dealing hay, straw, ashes and bale ties.  He kept an office at 12 Moulton Street in Portland for some time, and was also named Postmaster of West Scarborough in 1888. 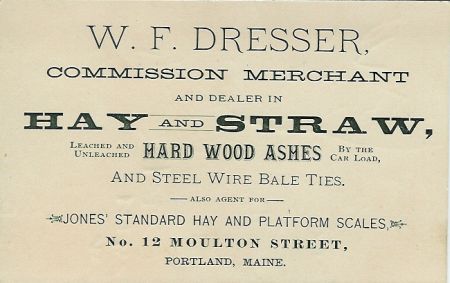 By 1896, Wilbur expanded his business enterprises into real estate, and became a popular broker in Scarborough and all around Greater Portland.  His company, W.F. Dresser & Sons was now located at 80 Exchange Street.  This company managed the purchase, sale and mortgage of a variety of Cumberland County properties from after the Civil War through to the end of the Depression.


In 1896, Wilbur also happened to be the Executor to the will of my 2nd great grandmother, Sarah Jane Temm, four years after her death.  In 1920, he also sold some land on Gorham Road to her son, John Henry Temm.

Wilbur left Scarborough just prior to the turn of the century.  He bought 220 Payne Road, just over the South Portland line, and they were there for the 1900 and 1910 Censuses.  For the 1910 Census, they had a servant, Eugene Foye.  Wilbur's exodus from Scarborough marks the end of a long era of Dressers living the Town.

To be closer to the burgeoning real estate business, Wilbur moved the family to Portland just prior to the 1920 Census, to their new home at 1181 Congress Street in Libbytown district.  The house was razed many years later to make way for the 295 Overpass and ramps. 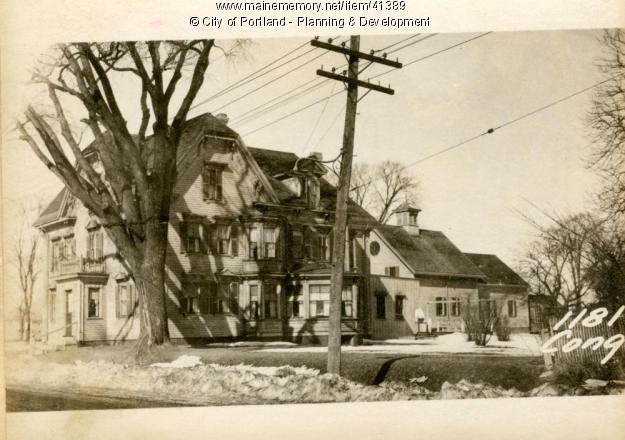 Below is a brief account of Wilbur's five children:

2.  William Watson Dresser (1881-1946) became president of W.F. Dresser & Sons upon Wilbur's retirement.  William kept the business going until his death, at which time he was merely a lodger and widower living on Neal Street, and running the business out of 22 Monument Square starting in 1940.  In 1915, William was elected as exhalted ruler of BPOE Lodge 188 in Portland.  His brother Perley followed him ten years later.

3.  Perley Chase Dresser (1885-1960) also lived in Portland, and was treasurer of W.F. Dresser & Sons.  He married Alice Barbour.  When his brother William died, he ran the family business until his own death in 1960, which signaled the end of the family real estate business, which had begun around 1895.  In 1925, Perley was elected exhalted ruler of BPOE Lodge 188 in Portland, as his brother had before him, but held the post for over 25 years.

4.  Leon Wentworth Dresser (1894-1967) also lived in Portland, and worked as a bank teller at Chapman National Bank.  He later was a partner in Millett Fish & Dresser (later Millett Rittenhouse & Dresser).  He and his wife, Phyllis Trefethen, had one child, Richard W. Dresser in 1925, who married Mary Libby and moved to Boston around 1949 to attend business school at Boston University - and apparently stayed in that area. 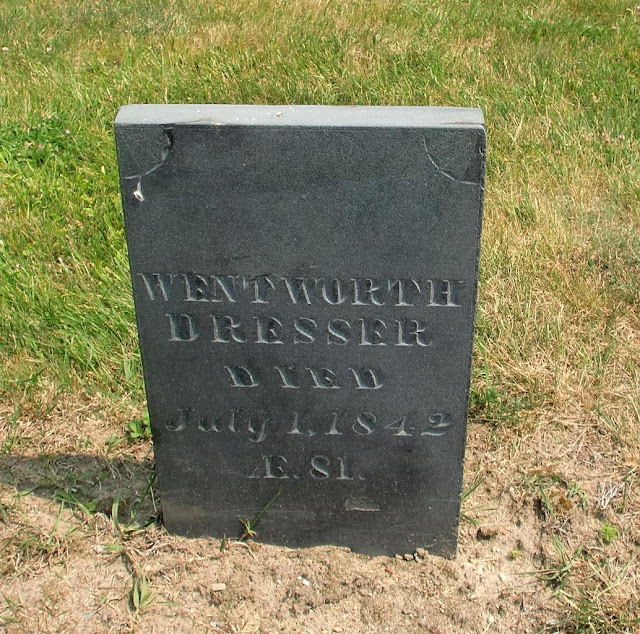 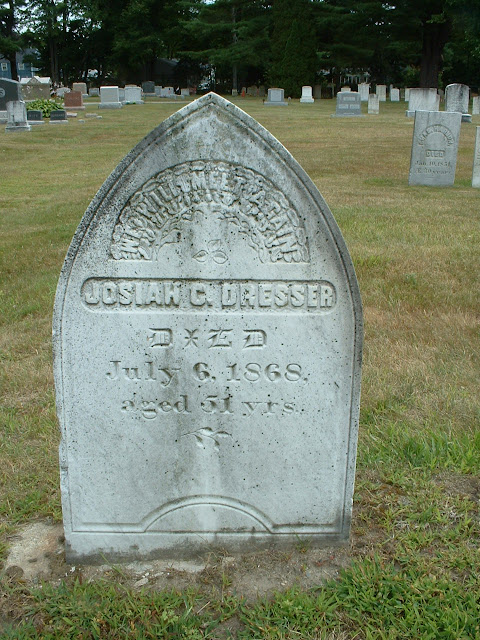 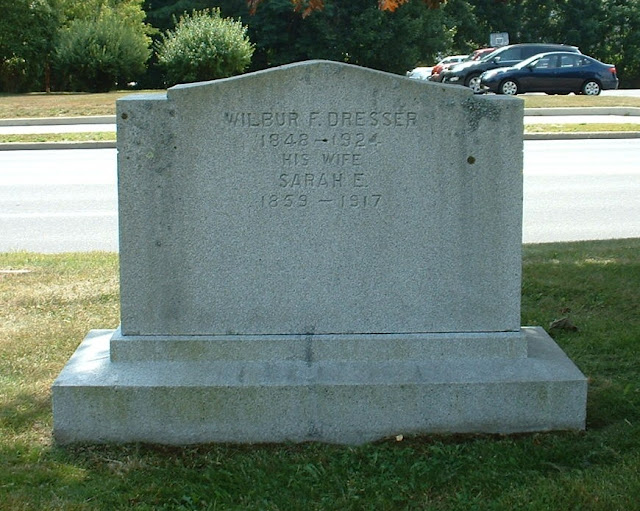 Posted by Scott Leonard at 1:05 AM